I think what would be a good idea would be the ability to control, perhaps on your beacon, who you could share plots with.

For example, I play with my uncle and we built our hub plotting equally, we find there’s lots of problems plotting up to each other and one person not being able to buy plots because of “would overlap another beacon”

Perhaps if there could be an option to merge 2 players (or multiple) beacons within a settlement/town/city. Which would allow for seamless expansion and plotting.

The overlap beacon message means that there is already a plot there on another alt or person etc.

But say “in between” plots of another person

We have consider this in the past, but the main issue was what happens when a character is deleted?

If plots are counted at the user level, rather than the character level - then what happens if an alt is deleted?

If each character tracks its plot contribution to the user, then options are:

If each character didn’t track their plot contributions, then what would stop a player:

Creating an alt, quickly getting plots, deleting the alt, and repeating?

Isn’t plot gain on lower levels slower than at max level, since you get less cubits and xp rates are assumed to be slower with less skillpoints? I haven’t actually tested it so there might be some way to exploit it, but I think T6 speed mining will be faster than any alt exploit. Somebody can prove me wrong

Or maybe I’m missing some aspect to this.

You would have to consider in game time required and ignore the crafting times. You can set up bulk crafting of stones to get from 1-14 really quickly, then at 14 you can unlock mass crafting to really push those xp rates through the roof. Even though you get less cubits per level, the xp between levels is so much less I would be willing to bet it’s faster to gain cubits on a fresh character. 1 teaching pie doesn’t get you a single level at 50+ but will give greater than enough xp for a level of you are sub 42

I’ve been working on this for some months now: Red numbers are post-patch-180. (The Progression Rework) Blue numbers are educated guesses yet to be confirmed. Green numbers are plots including the Wayfarer perk.

Problem solved by only having 1 character

180m exp in and still no need for an alt

Managing plots between alts is not easy, I had that problem on EA so when we had skill page possibility on launch around launch I decide to play mainly with one character with skill pages.

I think T6 speed mining will be faster than any alt exploit. Somebody can prove me wrong

Or maybe I’m missing some aspect to this.

If create, level & delete loop would keep global cubits/plots on account it would get interesting for more players. Currently this loop benefits only coins but if it would reward also plots it probably would get much more interesting.

There would be more benefit to do these crafting jobs on temporary character when there isn’t anything to lose and could just repeat it. Right now there is XP and cubit related loss.

I does with max zeal, doesn’t it?

But even so, the setup time to mass craft rock is actually pretty high, you get similar xp/hour while mining with a pie. Or maybe I’m just slow with all the inventory management

No it does. I was actually just about to post your comment from the testing way back when 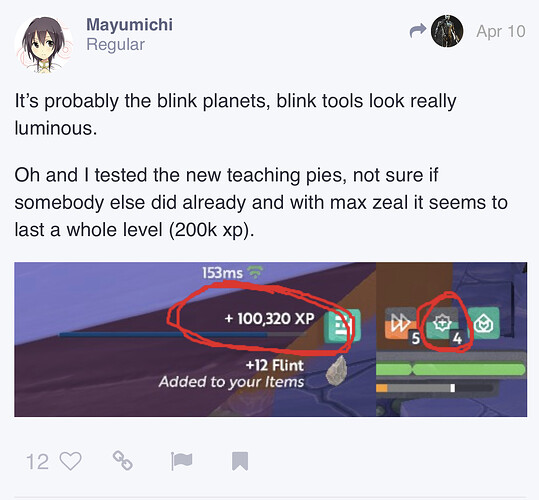 Does the pie’s text factor in zeal? I was under the impression that they only gave bonus 70k xp (140k xp). That makes them a bit more useful I guess!

Does the pie’s text factor in zeal? I was under the impression that they only gave bonus 70k xp (140k xp). That makes them a bit more useful I guess!

Maybe right way to say would be that it gives double xp gain for next 105k xp earned with maxed zeal.

What about being able to transfer entire beacons between alts without having to replot. The alt would have to have enough plots of course, the game could even prompt how many free plots you need to cover the beacon if you don’t have enough on that alt and a link to exchange screen where you purchase the plots with your cubits. I guess even to be able to transfer the beacon and all its plots from player to player. I think I could have helped to keep a lot of players coming back to the game after their breaks if that was possible. I find it difficult to plot some of these large builds with multiple levels and rooms so I just offer to refuel beacons… but there’s getting to be too many and I’ve forgot to fuel a few of them

I think on deletion of a character you could incorporate both options in aspects. On attempt of deletion you would be given a warning about not having enough plots on the remaining characters to cover the current placed plot count, ‘Are you sure you wish to delete? This will place you in a negative plot count, you will not be able to plot again until you have earned enough plots to recover your debt.’

With showing how many plots you will be in debt and all plots costing 30cubits each, there could be an option to use cubits to negate this debt at point of deletion for those who may have cubits saved up.

I will agree that to have the ability to have account wide plot balance instead of character based would be a huge QoL change for some who have played as 1 character and since moved on with random useless amounts of plots that now sit wasted.

I would say that to have it as account wide plot balance would be better as an option rather than a guaranteed thing, for families where the parents don’t necessarily want their children running round randomly spamming their plot count everywhere. This would keep some control and maybe avoid unnecessary reports about people mass plotting against people causing issues and taking up valuable dev time resolving these if they can’t be handled between players.

All in all I feel this would be a good idea as an optional setting.

The user can’t delete a character until their plots are manually removed from the world.

This doesn’t really help when your plots are all over the alts. Mine are distributed pretty equally on 7 alts for example, since I do a lot of different activities.

Isn’t plot gain on lower levels slower than at max level, since you get less cubits and xp rates are assumed to be slower with less skillpoints? I haven’t actually tested it so there might be some way to exploit it, but I think T6 speed mining will be faster than any alt exploit.

It is cheating to allow a person to create an ALT and gain plots and then transfer them over to another character so they can delete the ALT and repeat the process. It does not matter if the plot gain is 1 or 1000 in whatever time frame. Time has no relevance.

It is cheating to allow a person to create an ALT and gain plots and then transfer them over to another character so they can delete the ALT and repeat the process.

In a game where you can just cash up and buy the plots, playing the game is what you consider cheating?

But I’m always for ensuring that the most efficient way is actually a fun way. If recreating alts produces more plots then e.g. mining, this would be bad. You should never feel forced to play a way you don’t enjoy.

Here is topic from last year about transferring entire beaconed areas to other character (who has enough plots to take it). To me that would be nice feature to have safe and secure way to do it.

HELP! Give us your opinion on transferring and selling beacons! Devlog

We’re considering a system where Beacons can be easily transferred from one player to another, and in the future from a player into their guild. Naturally this could also be expanded to include selling your Beacon for Coin. We’re keen to allow players to be able to easily and safely sell their builds but it could create new dynamics within the Beacon system - namely:- Land Speculation - Plotting areas for no other reason other than to speculate on it being worth something in the future. Ext…