Are we allowed to plot around single plot beacons without anything built on them?

Or is that still disallowed by the rule that you can’t surround someone?

The CoC says no surrounding other players. To the best of my knowledge there has never been any developer clarification on if the beacon has to have anything on it or not. In theory if you have a gleam deposit you wanted to protect, you would not be building on the plot. if you have been surrounded then you should use the ingame report function to report it.

The way I interpret it is that you can plot around someone, but you can not seal them off.

For example, you plot around someone’ and then build walls around their plot. This is bad.

Next example, you plot around someone, and supplement their plot with access to exit your build (open world/portal/etc) This is good.

If that’s not how to interpret it it would be nice to know.

You can not plot around someone all the way around. By the definition they mean by it is the person has to be able to expand by plots. That even includes single plot beacons

Some Examples of Griefing:

Plotting around another players base, with intent to stop them expanding

The CoC only mentions that surrounding another players base, not single plot beacons that are, most likely, only used as warp destination.

The CoC only mentions that surrounding another players base, not single plot beacons that are, most likely, only used as warp destination.

What makes it a base? lay down one block? It has a beacon is that not enough? Is a farm a base or is only a workshop a base? My interpretation is you cannot surround another player’s beacon, developed or not. They have to be able to expand per the code of conduct.

What makes it a base?

They have to be able to expand per the code of conduct.

What if the beacon gets surrounded by 4 other players? Is the 4th breaking the CoC?

And what about plot reservation? 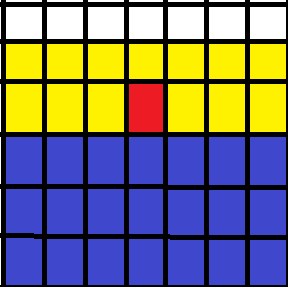 Red is a single, undeveloped beacon. Therefore has no protection area.

Blue is another players base, yellow is that players protection zone.

Is the blue player breaking the CoC because the red one can’t grow his “base” because of plot protection.

I agree with this interperation as well.

Only vertical enveloping is illegal and that’s why it is made impossible.

Horizontal enveloping isn’t illegal as such, but can be reported should the surrounded beacon owner see it as malicious and then you have all the dispute via devs to go through.

If you only ask about technical side - yes, it is possible to fully surround a beacon with another one (I have done it between my alts).

I’VE BEEN THERE:
Long time ago we had a situation in our town, when someone randomly plotted 2x2 and left some stuff there (an unfinished cube-shaped house), but we’ve never seen that person, and since it was right in the middle of our planned town (we didn’t have enough plots to cover all we needed) we eventually surrounded that beacon.
We were ready to talk and negotiate with that person if he/she showed up, but it didn’t happen and the beacon has eventually ran out of fuel after a few months

SO: I wouldn’t advice surrounding without trying to make contact and talk, but if there is no sign of the beacon owner, than it’s safe to proceed with your plans (just be ready for whatever reactions if that person does appear and finds their beacon blocked off)…

That would be a change in the rules, so until the developers decide differently this is not a requirement at this time. Should it be is up for discussion as it would allow a new player to be griefed by other players until they met the 10k prestige requirement.

And what about plot reservation?

What about it? Is it even relevant to what is and is not against the CoC? If a players does not understand how it works (or even if they do) they may not have it on. That alone should not make a determination on if a player surrounding a beacon of another has broken the CoC.

I got the door to my base sealed off once. I didn’t report it or anything, I just moved the door.