Me and a couple of my friends (all US East and PS4) are having issues with the world not rendering on several different planets (Circapous I, Serpensarindi, Cephonex Merika, Maryx to name a few) and sometimes even the Sanctum.

I have had the world disappear around me, reappear for a short time then disappear again. I have checked my internet and it is not the problem.

Anyone else having issues like this? I really want to go gleambow hunting, but this makes it almost impossible.

I have the same issue it gets really bad at times

On PC you can turn down minimum frame rate and fix it most the time. But not sure PS4 has that option

tl;dr: On PS4, try going into NETWORK in your game’s settings and turning up the chunk download rate if you haven’t already. Worked for me.

I’m on PS4 also, and I had this exact same problem the first couple days of Gleambow Racing. 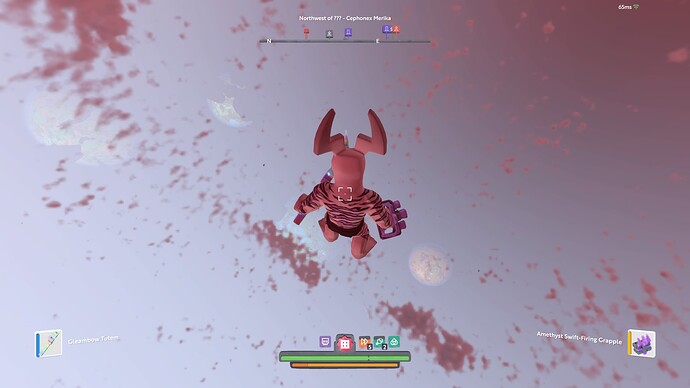 It happened on occasion before, but going soooper fast racing for gleambows made it occur almost non-stop. It even made it to where when a gleambow meteor would spawn, I couldn’t even see it. Not because it was light in color or too far away, because the graphic wasn’t even visible in the sky.

I’m not incredibly tech savvy. I tried slowing down, even going afk for a few minutes to let the planet “catch up” to me. I tried going into graphics and messing with field of view, depth of field and bloom. Nothing helped at all. By the end of day two I was beyond frustrated and started poking around settings again.

That’s when I noticed chunk download rate in network. Cranked it up to MAX and I never encountered this issue again, some several hundred gleambows later. I found this odd, because I thought having it lower would make the connection smoother. If you’ve already tried that, then well, I have no clue. It worked for me.

Due to the previous setting it probably had some trouble downloading chunks as fast as you were moving in the world due to the artificial limit.

Well whatever was going on, that setting did wonders for me and made gleambow racing great again.