Make Me An Offering

So, in the Halloween grotto/sanctum, Giorgio’s riddle:

Make me an offering …

Only I made the four thingies in the workbench (pumpkin, cauldron, doll, skull) and have made some creepy / scary seeds …

But I can’t work out what to do for him … anyone figured out this riddle, yet?

Oh, and there’s a few blocks behind Giorgio with a character holding aloft their hammer … have tried a few hammer actions in there … nothing doing.

OK, I’ve found the other graveyard to the south, and that has a cave with pedestals on them with the pumpkin, the skull, the cauldron, the bat, the doll, and the spider, so I need to make the bat and spider, too … I guess.

I don’t think you can actually trade him

No you can’t trade him. Also don’t think you can even drop anything out of your inventory. Can’t die in there which would be the normal offering to @georgegroeg

I think, you just have to take selfie with him…

I dabbed with Georgio, making an offering of my dignity. That doesn’t count?

Someone made me an offering of 13 black glow cap mushrooms last night. I accepted and gave them 2 nice grapples. I think it was a fair deal.

well, i have pretended to like all the modern western pop music for a day, in all its strummy love nonsense, no dance routine, blandness … will wait and see if that’s brought anything in game later.

I’m tempted not to tell y’all how I did it … but surely someone else has managed it. 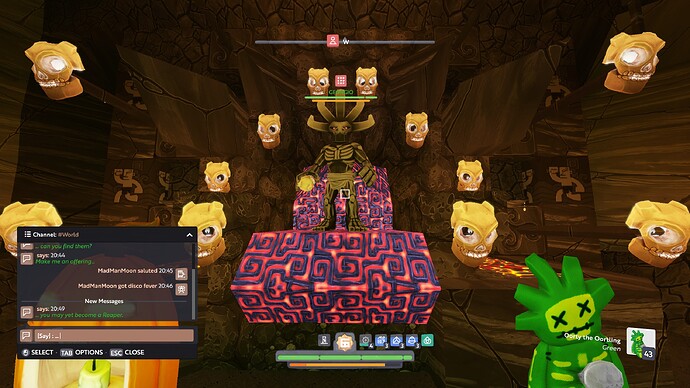 Giorgio dabbed then said “…you may yet become a Reaper”

Lol. My go to moves.
@james

For anyone that’s wondering how to do it, I’m going to bed (otherwise I’d offer you hints) … I’ve put the instructions in the ‘interaction’ on my PM sign inside the bath house hub on Sochaltin I, which is just outside the GTG Outpost (accessed from the GTG Hub) on Soch.

That should keep it suitably out of reach for you to want to try to work it out yourself.