I wanted to know the relevance of having several different beacons in a 100x100 lopin square. ( example )

I had started to take land but a guy told me that I was making a big mistake and that I had to split my land into several parts.

Is it really useful or with a beacon I can freely take my land?

I myself have everything in one beacon, and there is no + side to spilt it up and claim it with another beacon on the same character.

Some people do split the clamed areas, but they do it with there other characters so that it’s not all under the same name to get footfall.

Well…
• If you’re using GleamClub, you don’t have to fuel all the beacons.
• You can give various names to the different parts of your build, like “workshop”, “restroom”, “gardens”, etc.
• If at some point you need to give a space to someone, you’d be able to have it compartmentalized already…

The build I made over several years, the Raxxian Sanctuary, used to be mostly in one beacon. I do have regrets about that as I would’ve liked to be able to say “these are the streets of the city, while this is the temple, this is the cathedral, this is my workshop”.

• You can give various names to the different parts of your build, like “workshop”, “restroom”, “gardens”,

ohh never I thought about that

tho it can be annoying without gleamclub

I think the reason for him to tell you is that having everything on 1 beacon reduces your prestige dramatically! when using the same material within a beacon chunk gives you prestige punishment.
this is the reason when I make huge builds I split them, for example, if I have an area of 100 plots I place 10 beacons of 10 plots, the reason for this is to get the most out of the prestige in the game and achieve the highest city rank faster (great city) so footfall is also maxed, then you could use alt characters to take over some roads or whatever to increase your footfall even more

• You can give various names to the different parts of your build, like “workshop”, “restroom”, “gardens”, etc.

this
I always split my bigger projects (towns) into quarters, important builds and so on. That way when you go around, visit etc you can see info on screen (market square, cathedral, farms and so on).
Nice part of role playing too - I always give names to natural features within town, be it a lake, a river, a hill, a forest.

Also, if u split large area into a few beacons that belong to different alts, you get more footfall as each alt beacon clocks coins separately . It’s different story if you only play one character.

If you find available space, you can place your beacon and plot away. A 100x100 shape would give you a perfect 100% compactness score, which is what the game developers encourage players to do.

If you string beacons together (ie: to encircle another player’s builds or spread out beacons to take up space with the buffer), you risk losing your beacon because these behaviors are against the Code of Conduct.

If you are building in or near an existing town, they may be asking you to not take so many plots in one area for several reasons. It’s a good idea to try to be a good neighbor & not disrupt their building plans. There’s plenty of room for everyone.

Like @Dulki, @Goblinounours, @HOST, @boundmore and @majorvex already have suggested (and explained) in their posts its usually done as a “zone” option under one or more characters (characters to maximize FF genaration).

Splitting up a big area also increases you settlement prestige when you use a certain block a lot in more beacons then when you use it in one (talking Multiple Smart Stacks of the same material).
For example area under 1 beacon has 1 mil prestige and split up under 2 beacons the combined prestige is 1,5mil prestige.

I do have to have to point out 2 things.

It’s perfectly fine if you plot the full terrain first and replot under an other beacon in the area you are “going to build” and set it as a zone.

If you don’t have Gleam club or don’t plan on extended it later on keep in mind multiple beacon is harder to keep track of when you have to manually fuel them. And planning to combine the other beacons to a single beacon after the fact can be a nightmare because of how it was plotted in the first place or potentially missing a few plots and have areas regenerate because of it.
(Im not the only that has had replot misfortunes over these past years

To point out once more if you want to plot it all under 1 beacon it is your choice certainly less to keep track of if you don’t have Gleam Club.

Super, thank you all for your answers it’s much clearer.

I mean, I still have most of the part of the planet I’m trying to preserve as natural on one beacon … I think I should definitely segment it, if not purely to ensure that I don’t lose it all at once during a sabbatical.

I do want to separate my (river)road plots on to another beacon, so that it indicates that folks are in Moon River … but then, I do find the effing sounds of moving between beacons too frequently to be a real pain in the ain.

I have played the game for almost a year and never cared about prestige. I actually did the one beacon idea, but I have recently split up my beacons and labeled them this allows me to traverse to specific areas in my build. Like @Goblinounours said you could have a huge storage area and you might have a beacon named “Igneous Rock” or “Gleam” and you could just port to it directly and that really comes in handy with large builds.

I always like things to be as modular as possible.

what I find very useful (and what I discovered shamefully late) is to keep a single plot ‘dump’ beacon somewhere on the side.

periodically put all your unsorted stuff into chests in it and reclaim - then you have everything sorted by color and type and accessible from 1 point. (beacon control in the warehouse for example)

but don’t use it to sort tools 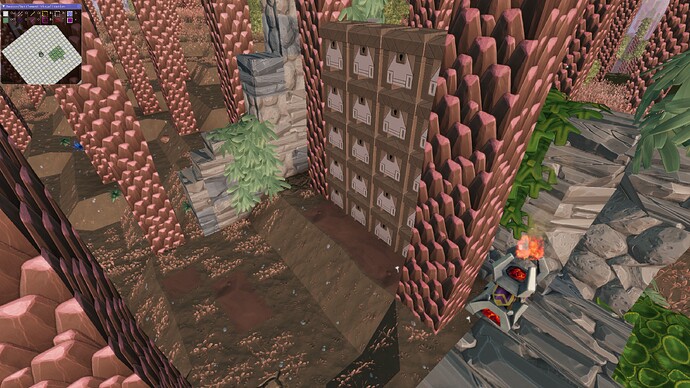 I ‘discovered’ this … like … a couple of months ago … I basically call it my ‘reclaim storage’ … when one is actually doing hunts and stuff … it’s nice to just dump the rubbish and not have to think about it.

Then sort it out from reclaim sometime later.

So if I build a pyramid all out of concrete, I’m going to suffer prestige punishment? When did that start?

correct!, i think this was done after the rebalance

the main concern back then was the abuse of gleam

The Prestige system has been a hotly discussed topic in Boundless for a while, both internally as a team, and by the player base since its introduction. The game has changed in many ways with each update, and while the first version of the prestige system served its function. It has become apparent to us it needs some changes to help players who have been failed by it and to discourage “Prestige Bombing” behaviours in settlements. We have worked internally on a new prestige system which should b…

done my pyramide concrete only the outside , but that doesn t matter for me you can put so much inside if you want to gain prestige…but prestige is meanleas to me i have only 7.200.000 mil prestige on my Pyramide on Pharao’s Kingdom my build on Arie has over 30 million and will perhaps be reclaimed …

I think the reason for him to tell you is that having everything on 1 beacon reduces your prestige dramatically!

Cookie Kingdom is all on 1 Beacon & me at 76million

yeah you can still seperate them, a leson i learned, also good ways to set up perms or seperated areas guild aligned