Edit: or just don’t call them NSEW but… Oortward and Antioortward and idek?

Decided to take my own advice and come up with new words for the directions, which I hope will make my brain shut up and quit confusing me. The idea is to give them names that can overcome my reflexive north-equals-up brain-cartography. I got S and N down, I think:

S = Szenith (“zenith” that… idk, had a Hungarian moment or something)
N = Nadir

(Zenith and nadir being the astronomical terms for “directly above you in the sky” and “directly beneath your feet”. Which I realize aren’t the same thing as S and N, at all, but whatever I claim linguistic license. Point is, they come with associations of “upness” and “downness” already.)

Can’t for the life of me find good things for W and E though. Any ideas?

The world isn’t a cube. If you want to be technical about it, its a relatively big, square tablet in a pacman/aesteroids world of wrapping.

In terms of rendering as planet, we literally do ray-trace spheres in the sky with a lit, constant density(*) atmosphere that is another spherical shell around the planet (* with some hacks to kind of make it look like the atmosphere density fades off towards the edge), shadowed by that planet, with the square-world texture sampled with a combination of a lensing and funky anisotropic pinch transforms to make it look like the worlds are spheres from a glance. The planets do not “rotate” so much as we just uv-scroll the planet texture before the transforms.

If you want to get really technical about it, the worlds are tori (singular: torus)… They’re shaped like bagels or unfilled donuts.

They’re only topologically homeomorphic to a torus; a torus they are not. You know, technically speaking.

In that you can map them to tori without outright tearing them, sure.

I am nothing but really technical.

The only way they could be otherwise (with cubic voxels matching cleanly) is if the game engine were capable of simulating spaces with more or less than 360 degrees in a circle. I understand that one of the old Duke Nukem engines could do something at least analogous to this (they apparently had a map with four central rooms that occupied the same space as each other, surrounded by a hallway that overlapped itself once to do a 720 degree circuit of the rooms, and each room had two doors onto the hallway, no vertical change in floor height of the the hallways or rooms).

Can’t for the life of me find good things for W and E though. Any ideas?

Yeah, it’s distorted a lot, but when I thought of what it would take to make a voxel engine render a true sphere in the polar areas I got a headache and had to have a nice lay-down until the dizziness went away. That’s a piece of coding I’d never want to read. I think a stretched torus is easier to visualize than code that would probably create a rip in space-time and kill us all.

Here’s a shoddy paint diagram of how it worked: 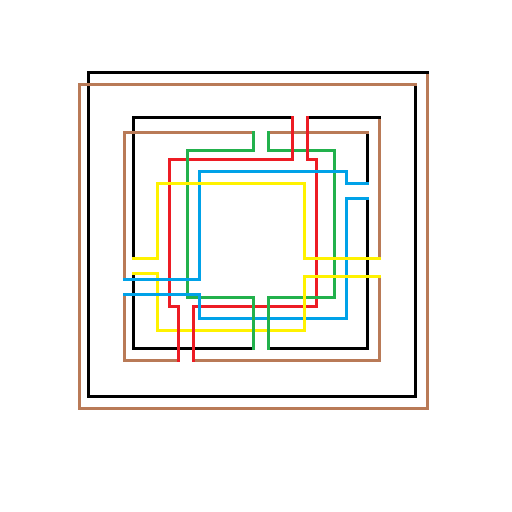 Red/Blue/Green/Yellow are the separate central rooms that occupy the same space.

Black and brown are the self-overlapping surrounding hall.

It gets easier to think about the more you think about it. Interestingly enough, after you got over the initial oddity of it, it didn’t take that long to learn how the map worked. Human brains apparently have the capacity to say “3 dimensions? Why? TROLOLOLO!” if they try hard enough.

TL;BrokeMyBrain: In short there would have to be multiple North poles, and multiple South poles, all occupying the same space, but separate from each other until you got near the equator (how near and how many poles based on how big around the equator is).

It’s still not really a sphere, but you’d at least be able to run up and over the pole and down the other side. The bad part would be what would happen if you were to go halfway up north and then go east or west. It’d have to connect to the other north/south “straps”, but it couldn’t connect to the directly adjacent ones. The world would look like an armory of Portal guns won a fight with a blender, in the worst possible way. Alternatively, like two 3 dimensional X-ray projections of oranges had a baby, and it looked like both of them at the same time.

Just connecting the opposite sides so that the world could map to one of three tori (x/y/z axis) is easier for everyone involved, and results in 100% fewer brain aneurysms.

I have spent the whole day (heroically!) restraining myself from texting my friends/nieces/postdocs with “UR FACE IS TOPOLOGICALLY HOMEOMORPHIC TO THE FACE OF A RLY UGLY PERSON!!!”

@AzureHelios Now make Sunward & Sunlee start with W and E so I can map them to my compass.

" 'Ward" worked ok but…“Eel” wasn’t getting me anywhere but stupid fits of giggles.

Now make Sunward & Sunlee start with W and E so I can map them to my compass.

How about “Eleemon” and “Wyrd”?