Just let me know, it would be great to have you come aboard!

I should be on after 7 pm EST tonight, if you want to meet up on a different planet so at least I can add you 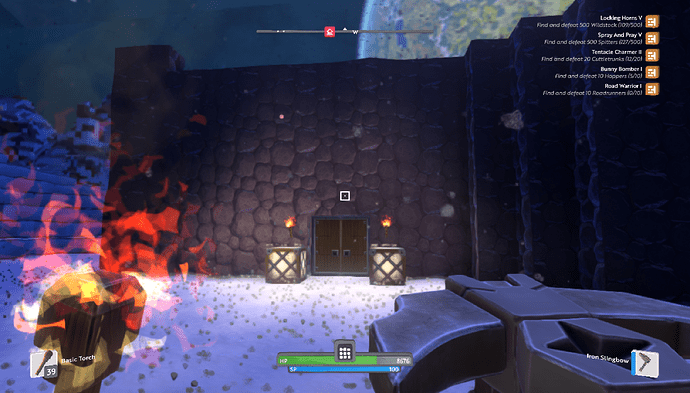 So I have the first floor completely finished with the basics, working now on the 2nd floor, the towers (already have one semi complete) and the basement residential area. After I finish the other front tower, I plan on building a moat. Already looking good on just 2 days of work!

Awesome place to build a community. Lots of spiky mountains. Check this out! 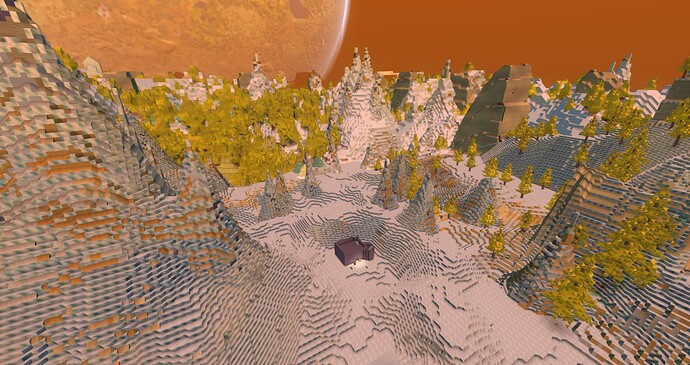 thats amazing! I am really loving the view

I’m visiting septerfon and have a small base here just to be able to do basic tools and such - main base is on Therka; who knows if I do enough exploring around I might find your settlements:sunglasses:

If I ever come to seperfon, consider me in

I haven’t been playing for a little bit due to a lot of work, but I recently started playing again and there have been some changes! 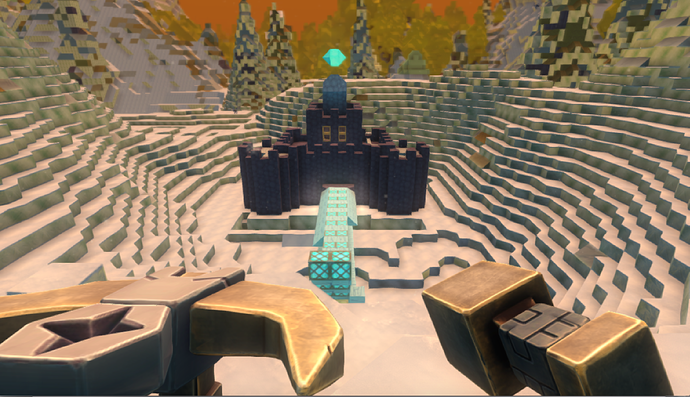 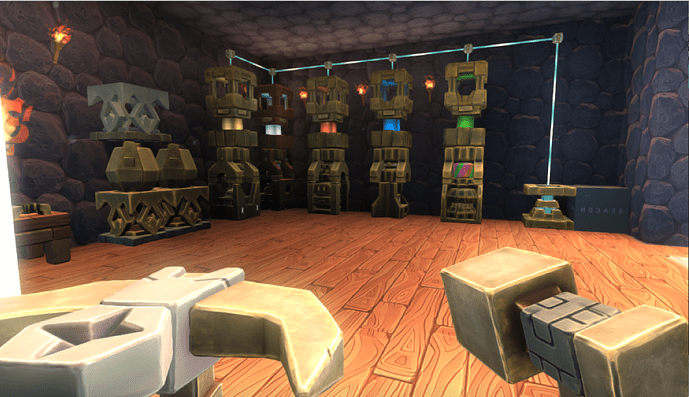 Working on portals to Munteen VII and to Solum. However, I was away for the reveal of the portals and I am having a hard time figuring out what the required amount of portal conduits I need per “hop” (Munteen is 2 hops away from Septerfon), I have tried 2 conduits, 4 conduits and 6 conduits (in rows of 2).

I know it’s 6blocks for 1 hop and 20 for 3 hops. Dunno about 2 hops but the required number rise steeply.

Best way to check is, if you have a warp conduit, just place 1 down and try selecting your warp destination. It should tell you how many hops & blocks etc

Ah I see. I figured it would be based on distance (and after me testing out 2, 4 and 6 conduits, the last and most expensive one would have to be 9). However, I believe the main reason why I asked is that when I put a portal token (lets say munteen to septerfon or vice versa), it only shows up as “portal shapes incompatible”. This is with both portals being 9 blocks with 100+shards. When I first started laying the conduits down, with me putting just a single one down, I never saw how many blocks nor hops it would be (but had the same issue with the “portal shapes incompatible”). Is there something I am doing wrong?

Warp conduits are different to portal conduits (they’re the one way single use version), but you are able to interact with a single block to see how many hops and blocks are required from your current location.

For your portal being the wrong shape, how have you placed the blocks? For the ones I have set up, they are 3 high by 3 wide. Both portals need to be the same layout/shape for them to be able to connect.

oooh I read wrong, I thought you meant portal conduits, my apologies (this is what happens when I get 3 hours of sleep!). No wonder why I couldn’t spot the issue. I haven’t used warp conduits in ages since I figured it would be less of a hassle to go back to sanctum and warp from there.

As far as the actual layout of the conduits, I have mine set up exactly like yours, 3 high by 3 wide. The first pic is of munteen with septerfon token and the 2nd is septerfon with munteen token. 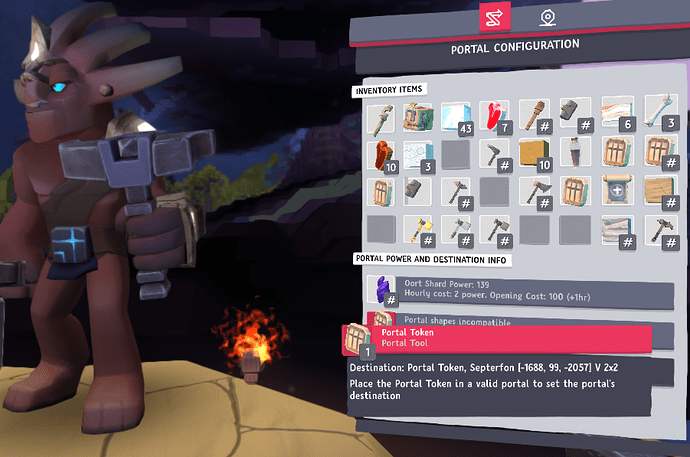 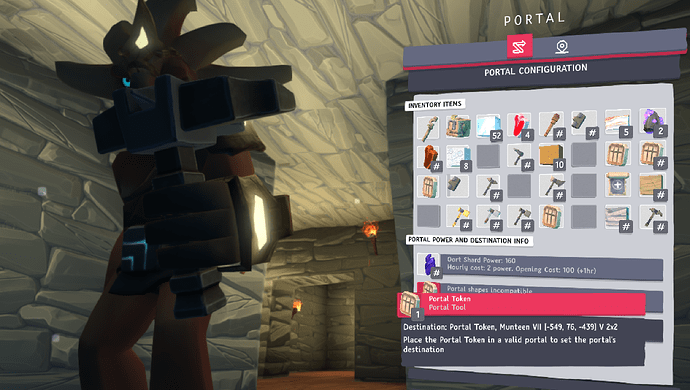 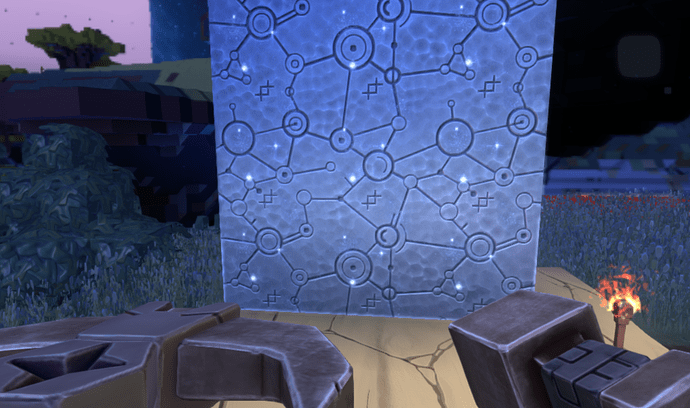 You only need to put shards and a token in the originating portal (this will always then be the only one you can fuel it from).

I usually build my destination portal first, take the token from it, then come home and build my originating portal, add the token, add shards and click open portal.

haha I tried everything, putting one token in one and trying, then both (which I didn’t think would work but it didn’t hurt to try), neither worked, just says the same thing. In fact, I did something silly and tried putting its own token in and first said it was incompatible, so I removed it and placed it back and then it corrected itself and said it cannot portal to itself.

BUTTT… then I realized. I had grabbed an old portal token thinking it was the same, never bothered to get the new one. Perhaps that could be addressed so there isn’t so much confusion (I tried searching the forums looking for a setup guide beforehand but alas, none were available!). Thanks so much for trying to help me out!

If you have opened some portals you may have noticed they don’t always orient the way you would have wanted them to and trying to change this can be very costly and frustrating (at least it was for me) Anyway i decided to take a bullet for the team and work out how to get the portal you want the first time! (750 Oort Shards later) ///////////Edit: I’ll make a Video Detailing this when i get some recording time =)////////// A video focused on Portal orientation: By popular demand I made a vi…

There is a guide and a video. Plz check properly.

Well, in all fairness, I typed in different key words and phrases. I did not see that pop up on the search list (here on the forums or on google nor yahoo). My sincere apologies if I offended you Dzchan94

No offense taken, but a little patience and no overuse of exclamation marks meaning rage, angst or desperation goes a long way.

I like to be expressive in my online conversations, it conveys emotion. I was just a little confused, but not at all angry or desperate. Its just a game anyways

Anyways, the portal is up. I intend to create another portal to Solum from either Septerfon or Munteen VII, and perhaps from Solum, I would create a portal to Therka. Eventually, I would like to have a portal on every planet.

I am not sure how long I would be able to play for throughout the week, given my work schedule and the fact that every time I do play, there is a severe rubberbanding issue known to Macs (its too bad I don’t have a pc, thinking about getting one and playing on there), so it limits my time actually doing something. Hopefully by the end of this week the next portal will be up. I am still looking for people to come help setup the castle