Some feedback on meteorites

I’ve been playing as a hunter since launch and, in the last month or so, I began to hunt in T4 worlds, specially in Delta Cancret. \

I love hunting and, since there’s been some changes to the meteorites with the 199 update, this is my feedback on meteorite events and hunting in general:

The Bad ( or at least very annoying)

(It is not uncommon for this to happen in the last wave of mobs in a meteorite event. All elemental creatures are ok to handle, but the cuttletrunks are just too much. They are the reason why I mostly do meteorites lvl 1/2 completely fine till the end, but die in the last wave really quickly).

It is not uncommon, in a solo hunt or in a group hunt, to make a really hard lvl 1 meteorite and, after, an easyer lvl 2 meteorite in the same planet. Furthermore, there’s also a lot of inconsistency between meteorites of the same level. How can one asses risk if you don’t even know if you’re capable of completing a meteorite of a certain level today.

An experience I had yesterday: In my guild’s workshop, there’s a portal to Circarpous I, a T4 planet. So,yesterday, at night, I went through it to explore the planet and, maybe, do some hunting. As soon as I got in the planet, a lvl 1 meteorite fell down really close to me, so I started doing the event.

In the first wave of mobs, there were 4/5 of these bad boys: 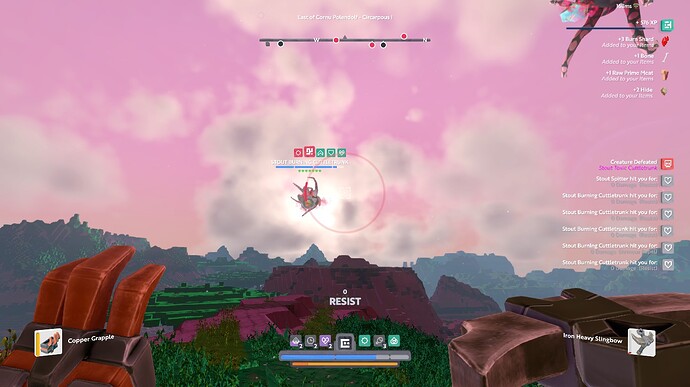 When I managed to hit then, I was doing, aproximatelly, 425 of damage. It was so disappointing, that I just went back through the portal and went to sleep. If it was a lvl 3 meteorite, or even a lvl 2, I could perfectly understand it, but it was a lvl 1. In that same day, in Delta Cancret, another T4 planet, I managed to make 3 lvl 1 meteorites with the same stats and equipment.

That’s it! Sorry for the gigantic post. Please say what you guys think about the meteorites and the things in this post.

I agree with the inconsistency. Solo hunting on T5 I have breezed through level 2s with no issues at all and then get destroyed by a level 1. Usually it’s a wave of buffed cuttletrunks that just wipe me in nothing flat.

I’ve learned to either build a fortress to fight from or go “meh” and move on. Dying isn’t that big of a deal. I’ve also learned to carry different types of slingbows due to resistances.

Yep same here… even sometimes a level 3 meteor on a tier 4 planet was easier than a level 2 meteor on tier 3 planet… was better before update.

Do you have pics of a layout for a fort? I just got the game last week and am struggling to get my first win on one and I’m level 20

Simple thing to do is get a grapple and hang from a tree outside spitter range. This allows you to pick off everything but cuttles at your leisure.

My forts are at least 10 blocks off the ground and are a sealed box with one opening in the floor to pick off ground traffic and one hole in the side facing away from the meteor for cuttles. Make sure you can move away from the openings and are out of bomb range.

(It is not uncommon for this to happen in the last wave of mobs in a meteorite event. All elemental creatures are ok to handle, but the cuttletrunks are just too much. They are the reason why I mostly do meteorites lvl 1/2 completely fine till the end, but die in the last wave really quickly).

Exactly that. This is why solo meteors for me are capped at level 3 worlds. It is just too inefficient to try to solo on level 4, If i lose 2 out of 3 meteors time investment is just meh and frustration is too much. Maybe with waaay better gear - like titanium forged slingbows, I will try again, but cost efficient gathering of oort is capped right now for me.
I don’t even want to think what i would have to get to solo meteor on level 5 or 6 planet.
What is unfortunate for me, even with max armor, shielding loaf didn’t make any difference.

I understand why each meteorite ( of the same level) is different from one another. But, maybe, some things could be fixed so that a lvl 1 will never be harder than a lvl 2. Or in a way that one can asses the risk of doing a lvl 1(ANY lvl 1in that Tier of planet). To do this, I thought of the following:

Or at least level 1 should never be harder than level 3. Cause this happen from time to time. Funny thing is right now meteorite difficultly looks like nicely balance with oort stones i get so this discrepancy between meteorite level and actual difficulty looks artificially added as a feature. Really would be nice if this would be tuned down a bit now with elemental mobs.
Edit:
Like level 1 meteor <10 oort stones.
Level 2 meteor < 15 oort stones
and so on every 5 oort stones.

Would be nice scaling and would actually show real scale of meteors across different planets.

Thank you very much I do appreciate it