So I’ve started working on the basic Hunter animations and thought you’d all like a sneeky peek.

This creature is a prime predator and will in a calculative fashion stalk and hunt you down!

The idle is aways a nice neutral characterful pose that the rest of the animations usually begin from. He’s tapping his claws in anticipation of the hunt as he’s strategising his next move!

In the Hunter’s case the walk needs to be super flexible to adapt to changes in speed. As the stalking phase in ai begins, he starts off slowly prowling the terrain… As the chase heats up, he will walk faster and faster, moving in a more energised and aggressive fashion.

My aim is for this walk to be able to work not only on the ground… but on walls and ceilings too!

Here’s some gifs to show how this walk looks simply as is, sped up on the ground and also on the ceiling.

More animations of course to come but only after I do a bit of missing character anims next sprint. Have a great weekend everyone.

73 Likes
Why is caving such a horror story?
New mob idea
Weekly Dev Update: 2016 October 21st - Slingbow, Grapple, Temple and more!
Hunter - Next Mob Confirmed?
Creature Devlog Special: 7. Ground Basher and Stone Thrower
New mob idea
Okay devs... Here's one of the reasons why some people can't stay invested into the game
Poll: Where does Boundless fall in your expectations? [Closed,Thank you to everyone who participated in the poll and the discussion!]
:spider: Halloween Fun...incoming
What are we owed?
Debug info - in Cave or not in cave
nevir October 21, 2016, 5:23pm #2

Caving is going to be terrifying. I can’t wait!

The base of the hunter’s “tail” feels a bit weird. Should it ripple more, to look more like energy, maybe? (or is it just pending shader work?)

I love the idle animation.

The claws seem to go pretty deep into the ground. Are there plans to let the hunter leave scratch marks on the floor for a period of time?
That would be really spook to see the marks and know he’s somewhere out there but you have no idea when he’ll attack you or from where.

Huh. From this image I sort of imagined them as floating, not using their arms to crawl. I know you’ve done some solid work on the animation already but personally it feels like some spooky flying/hovering (think stereotypically ghost “swoop”) would be scarier than claw crawing with a gravity-averse rear-end. 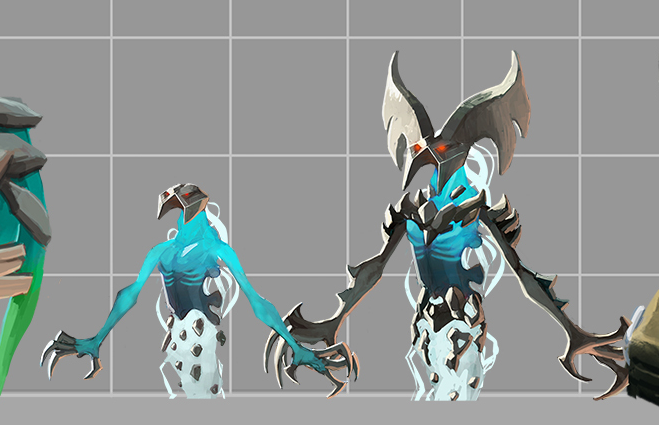 Maybe their just floating and have to pull themself around. Not every floating thing can also move in a direction^^

Are there plans to let the hunter leave scratch marks on the floor for a period of time?
That would be really spook to see the marks and know he’s somewhere out there but you have no idea when he’ll attack you or from where.

i had the same initial thought that they would be standing, but i actually think the crawling is far creepier, specially if they crawl on the ceilings that would be just terrifying in a cave.

OH MAN! This is going to be amazing!

My main problem with the crawling is the gravity-averse rear. I think if they had four legs and the rear lowered to be made a bit more ant-like it’d be a bit creepier. But with that tail thing hanging in the air, shaking around like it just don’t care, I’m just not feeling creeped out that much.

OMG!!! This is very scary i will never go out from my home lol
Great job!!!

So the ultimate plan is to have 3 ai/animation states for the hunter which encompasses a lot of the great ideas already on this post. His first state is ‘ethereal’ where - yes he’ll be flying and scouting for victims: see the pic below which was an exploration pose of this stage. The second is ‘hunting’ - which is the work you see above where he stalking the player and choosing when to attack. The final stage is ‘attacking’ where he’ll be chasing you down to launch his frenzied claw attack! Basically - he’ll be doing a lot of actions which together will make him a calculative predatory foe to be wary off.

I’ve taken notes of leaving the claws scratching on the blocks as ‘footsteps’ - that’s an awesome idea which I hope we could do at some point as polish later on!

Yup, Going to invest all skills into movement speed!!!

I really like the way it moves, (kind of like a prowling Leopard).
Although I agree that it should move a little more like a floating “ghost” every once in a while.
(Maybe float about, but crawl up and down walls etc.)

So the first task of 2017 after coming back from Christmas was to immerse myself into doing the Grappling Animations for the new release we’ve sent out of late. I hope you all find this a nice improvement - which (I can now tell you) will soon get better with new VFX from Dom and Michael showcased internally today!

I am now motoring on with the Hunter again (whom I love!) and I can show you all a few more animations in progress with the animation set done with this creature feature.

At the top of this post, I last shared the animation of the basic hunter traversal ‘Walk Forwards’. Now we have the full set going Left, Right and of course Backwards.

The other traversal state you’ll find the hunter in, is Ethereal where he fly’s in and ghosts out of the sandbox. In a dark cave while mining…maybe turn up the volume to hear if any of these guys are within the vicinity - he could otherwise take you a little by surprise!

Here we have a 3 part animation allowing him smooth transition from his Hunting Idle to Ethereal Flying Idle.

… sooooooo
once pieced together - it’ll hopefully look a little like this once integrated.

Have an awesome weekend guys.

So I’m very happy to share with you all, that the first line up of the Boundless Creature Family line up is now animation complete!

All our creatures in the creature devlog special from the Wildstock to the Ground Basher now have a good completed set of animations that can be integrated into the game. Below I’ll share the remaining animations I’ve done of late to complete the Hunter set.

Have an awesome bank holiday weekend

Continuing from my last post where I showcased the stages of animation in the ethereal flying state. He also in addition will occasionally stop to patrol and stalk his next prey in between roaming ethereally around the Boundless world.

From the flying loop this animation transitions characterfully into the Patrol state.

This ambient idle which will cycle with the breathe loop above, depicts him scouting for his next chosen prey - look out!

Not finding anything of interest, he can always casually sweep back into flying.

At any point if you are fortune to get a direct hit in, this animation will show he’s taken some damage… though this will likely make him mad…

After stalking you in a calculative manner (see his ‘walks’ at the top of this post) or if you’ve managed to get a good cheap shot in while he was caught unawares, at some point he will engage you in direct attack.

From walking he will transition into a full on gallop straight towards you till he is range to pounce.

This is another animation comprising of an in, loop and out - however to show the Hunter attack in full glory I’ve pieced them together. Beware all who venture into the Hunter’s lair!

Like all good fight or flight situations, if you do get on top of a Hunter and end up killing him, you can now reape the rewards from his fallen carcass… after all… fortune favours the bold as they say.