not sure if anyone else is experiencing this too but on PS4 If you use the Gleampops To walk on water the world effectively becomes invisible. I have tried every network and graphics setting I can think of but it seems my ps4 Pro just can’t handle rendering in the ice you create and the world at the same time. The second you come off water and back to land everything reappears but its making the gleampops effectively useless on console as you can’t see where meteors land, or anything else lol

It’s not just the water walking.

Yea they do that too, but thats not 100% of the time for me. The water is every time without fail

I think it’s just because you can move fast on flat terrain.

I get the same disappearing bug any time I run for a while on a flat road.

I have this same issue. Water walking is hurting me more than it helps. I assume it was due to the additional resource strain on the ps4. Not sure if it’s a bug, probably just because the servers and your ps4 are stressed (mine too)

Just makes the whole event utterly biased toward pc. They get the nice meteor mod and no disappearing screen… makes it super easy to compete and gets meteors. Honest

If they had addressed the long standing draw distance disparity it wouldn’t be an issue.

yea. I just did a side by side test with ps4 and pc. Pc was flawless on max settings etc. Ps4 Pro failed at the first hurdle

I think this is actually going to be the thing that causes me to walk away from boundless on ps4.

Seeing PC have such a huge advantage on this , plus many other things, first hand is actually saddening. I always knew pc was superior but playing it now just makes ps4 seem like it’s poor backwater distant cousin.

Does anyone know if GC is cross platform? E.g. my accounts GC Will work on my pc toon. If so RIP ghandy, pc master race here I come

They get the nice meteor mod and no disappearing screen… makes it super easy to compete and gets meteors. Honest

This is not true.

When you say your PC is “flawless at max graphics” it’s clear that you have a good PC, probably far superior to your PS4. 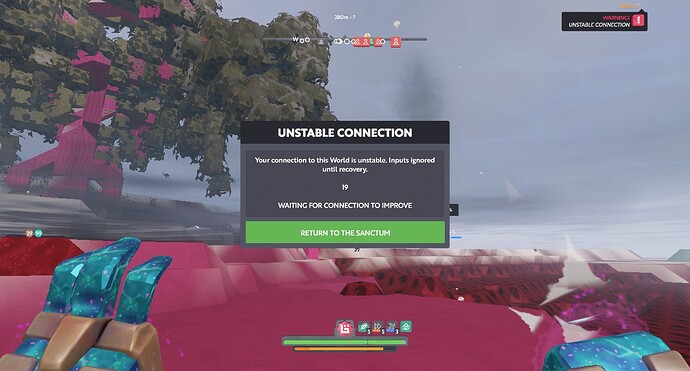 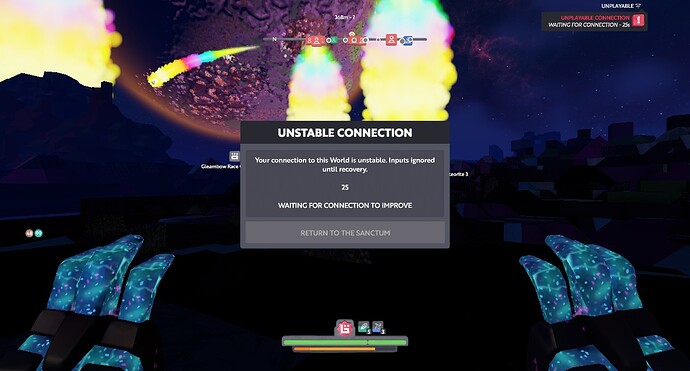 At the other end of PC playing this is all perfectly normal for me.

Since I started playing they’ve increased particle effects, increased grass, increased foliage (At least taken away settings) added graphical effects and made other changes (the farming/lighting change was HUGE) and done, it seems, tons of stuff to the game to take advantage of graphics capabilities that the PS4 and some computers just don’t have.

Now I can easily outrun my graphics card with good grapples and a speed brew. People on the same hunt as me were getting considerably more sacs than me yesterday just by being able to make it to the meteor while I’m lagged out unplayable waiting for the ice trails and the meteor landing effect to hopefully render before I drown too far away to generate corpses.

Now the whole point of this rant is not to minimize what PS4 players are feeling. It’s just to point out that it’s not automatically gravy for all PC players.

I’ve posted my hardware and sometimes I feel silly to complain about it TBH, however seeing post after post after post of “PC players have it so awesome” and knowing the downhill slope it’s been in the 16 months or whatever I’ve played I sometimes feel the need to say something.

There are PC players who are constantly de-rendering, go unplayable for a few seconds after using a portal, lag out in their workshops, have to lower setting, etc… as well.

I have a PC with no graphics card and 2gb of ram
On PC you can turn some settings way down, and it works well. PS4 don’t get the same options.

I think this is maybe more accurate in terms of the issue. The ability to adjust lots more depending on your pc spec rather than having a few options that make little difference .

I have a PC with no graphics card and 4GB of RAM.

Boundless manages to crush my CPU and GPU much of the time.

(Boundless isn’t running in the screenshot)

I play with every setting at minimum pretty much

I can see why that pc might struggle. Perhaps wrong of me to assume pc’s are all better than ps4, because without being offensive a ps4 might be an upgrade for you. Sadly a pc is most definitely an upgrade over ps4 in the majority of cases

without being offensive a ps4 might be an upgrade for you

Yeah and I don’t complain a lot, though I do joke about it sometimes or reference “the potato”.

It’s only when there’s an uproar and it seems like a bunch of people going on about “it’s only PS4” or similar that I bring it up. There’s a whole range of PCs between me and someone on last weeks hot gaming rig. And since release they have increased GPU intensiveness and decreased adjustability for PCs.

I play with every setting at minimum pretty much

Me too and for my normal gameplay, it’s tolerable. But as soon as I try to jump in a big group hunt or a busy area things can get really rough.

Did you turn the resolution down too?

Also what CPU do you have? Mine is an old core i3 laptop

My box is not upgradeable.

It has an N4200 CPU which is a low energy consumption CPU that came out around the time of the second or third gen Core family.

It is quad core, running Win10 64bit and the drive that steam/boundless are installed on is a 64GB SSD.

Your i3 probably has a more comprehensive set of media instructions. This box can stream HD and even 4K when the net is good but I think it honestly leans on a hardware codec for some of that.

My usual boundless resolution is the default windowed resolution so, it’s less than 1080P.

If you would like a taste if boundless at 7 - 10 FPS I’ve got you covered:

So I’ve been having some conversations regarding my boundless experience since I decided to post those videos last night. Since I had gone and configured Windows’ video capture I decided to gather a couple of short clips. I was tempted to post in @Huntsman’s thread but didn’t want to clutter it up with silliness. Running video capture seems to be costing me 2-3 FPS. And to be honest, at these framerates that’s pretty substantial. I decided to get on my hunter and go look for a fight. Gyos…