What happened to Titans?

Will we ever see Titans being added to the game? Personally, I would love that and it will definitely make the game more fun.

Now that you mentioned it they will be out tomorrow!!! Yay!

On a serious note, there is a new dev team being put together so that team should probably come together first then we’ll see what development is to come.

Fixing other things I would think take some priority though… like the new player experience and a new/updated TOS.

After a long time playing people need a break from Boundless. I think Titans have a long break too.

OR, Titans are afraid of us and are hiding…
OR, the DEVs never finetuned the buggy Titans and put them on the lowest priority.

Don’t ask about the other mobs that never made it into the version of Boundless we play today.

Personally, I find combat to be the least developed , most repetitive and boring system in the game. Whether they add Titans or some other form of combat event, I do think it needs work.

There were numerous concepts & prototypes that didn’t make it to Live after the official launch. At this point, we probably should let it go and look towards the future. If the upcoming new team wants to add Titans & if they think it would still benefit the game overall, that would be amazing.

I think everyone should be prepared for them to bring fresh, new ideas though. Personally, I’d be happy with Titans, temples, dungeons, new mobs, new natural resources, biomes, planet tiers, or anything else that they could add in. As they’ve said, it will be awhile though.

Have you seen the huge machines at @georgegroeg place? Those are the real titans!

Don’t ask about the other mobs that never made it into the version of Boundless we play today.

Or other features. Sometimes I still go onto the test servers just to load up my 350 367 point skill page and whack stuff with swords. 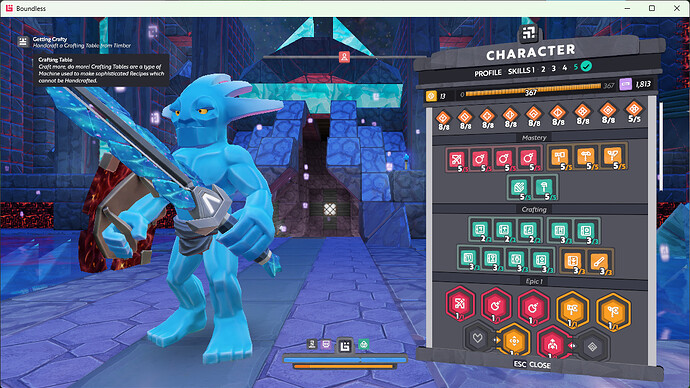