EDIT: It appears the issue is rather that guild prestige and settlement prestige rankings are both being listed under “Top Settlements,” rather than fragmenting cities as I discuss here. Thanks @boundmore for the clarifying screenshot. This is still an issue that needs to be addressed in my opinion.

The introduction of guild-aligned beacons has made on-world prestige rankings incorrect by fragmenting prestige that should belong to a single entry. Take the top 5 settlement list for Trior: 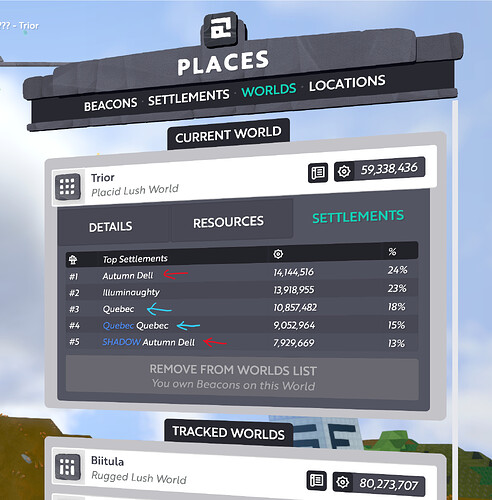 Both Autumn Dell and Quebec are split into 2 separate entries. Quebec’s total prestige if alignment was not considered is 19,910,446 - pushing them ahead of Illuminaughty.

There are bigger implications than competitive ranking, though. If Quebec theoretically had another 3 million prestige, it would be the capital city over Autumn Dell if alignment was not considered.

I am not personally involved with either entity, so I can’t speak as to whether or not this is just their error for not aligning all their beacons. But I certainly doubt it’s by choice, and either way, it makes everyone else’s world rank false.

The simplest solution that comes to mind is to simply ignore guild alignment when calculating world ranks. I don’t know if this would alter other beacon alignment features, however. Thoughts?

Quebec is hosting a mall with lots of shops owned by non-guild member, their beacons prestige add to the city prestige, but not to the guild prestige

The ranking system is supposed to reflect city prestige, though, not guild prestige. Mixing the 2 metrics in one list doesn’t make sense.

Perhaps a more complete solution that still displayed guild prestige information would be to create 2 lists: a settlement ranking list and a separate list for guild prestige rankings.

I have seen somewhere that a settlement made entirely of the same guild beacons was listed twice, just like in the screenshot above.
So, it listed SETTLEMENT and GUILD SETTLEMENT together with the same prestige. 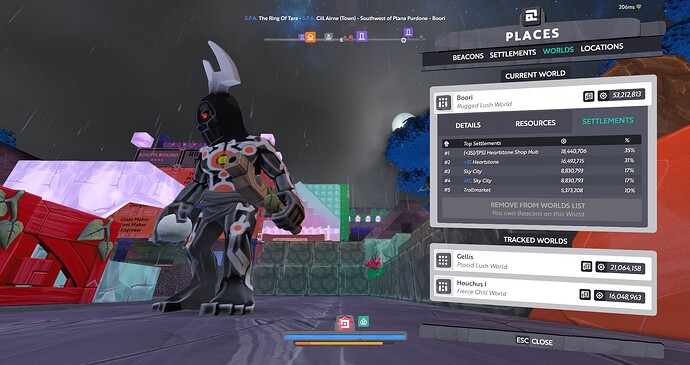 Yes, I don’t like that either. I think James explained it & mentioned they were thinking about hiding part of the info.

Oh wow, thanks for this. So indeed it appears the list currently includes guild prestige AND settlement prestige in the same list. And I said above,

Mixing the 2 metrics in one list doesn’t make sense.

Mixing the 2 metrics in one list doesn’t make sense.

would be better if the list showed only the large settlements (under LOCATED IN section in beacon info), me thinks

Quebec’s total prestige if alignment was not considered is 19,910,446 - pushing them ahead of Illuminaughty.

Which is incorrect, the total prestige if alignment is not considered is 10.8 million.

There was a post by James at one point where they were considering changing it to only listing the ‘greater settlement’ if the two names were exactly the same, so in this case the guild aligned parts would not be shown.

Yeah, rankings are a great idea but this current this system does need a rethink.
I have the top 3 rankings on soch I and that’s not fair
Did post this a long while back in a related thread.

Yea on Sorissi Order of Oortian is no longer in the top 5 because of the split settlements that show up push us down.

Yeah, as I edited at the top of the post, the theory I was using to calculate that is bunk. @majorvex also mentioned a post by James, does anyone have a link or info to find it?