Please please add some lava flamingos. I won’t buy another game for the rest of the year if I can chase a flamingo around my build while he sets fire to everything with his feet.
Please.

I agree the ecosystem could use some work. Lava and water need to have some life. Imagine lava mobs trying to drag you in. Weighted projectiles would become relevant for water fights.

Please please add some lava flamingos. I won’t buy another game for the rest of the year if I can chase a flamingo around my build while he sets fire to everything with his feet.
Please.

I know, right? Just take the existing T6 Road Runner model, change the name, alter the look a little, and program the ability so that anywhere it RUNS turns into lava. Then increase their drop rate of Oortstone, and you’ve got a hilarious new enemy to battle!

Imagine lava mobs trying to drag you in.

Reminds me of the Lava enemies in Mario. Like the dragon that jumps in and out of the water. Even some bone fish might be nice.

The point I’m trying to make is, while the Hunter mob that’s upcoming is going to be cool I’m sure, I feel like the game would benefit from simpler enemy additions and changes instead of focusing so much dev time on just one enemy.

Simple AI enemies to populate the world so it isn’t just endless Wildstock would go a long, long way for making the world feel alive.

Not suggesting that it’d be easy but you never see massive creatures that you aren’t supposed to kill in games, ya know?
I wanna build on a huge hill-sized turtle that walks around eating foliage and not being aggressive…
Foliage is so good.

T1-3 worlds should have non-aggressive enemies with simple skins and AI. Some simple birds that squawk, hop in and out of trees, some simple frogs in the marshes/mud areas, camels in the desert, lanky deer in forests, cows in the plains, etc. Give them ingredient drops and weaker food bonuses. Allow people with max stealth to approach them more easily.

Lol dum down hopers and give them the fleeing that road runners do. There are your frogs.

Birds are already in the game but they are hard to see. Its ear bleeding @ some times^^.
Hear them all the time but im not able to find them.

Just take the existing T6 Road Runner model, change the name, alter the look a little, and program the ability so that anywhere it RUNS turns into lava.

Roadrunners only have 3 tiers. The creatures abilities were explored at the concept stage and I still believe they will find their way into the game at some point.

You are way too hung up on your preconceived notion of what animals are and the fake placeholder names I used.

Sheep, pigs, chickens, for instance, all bare minimum programming, all just simple skins.
[…]
Some simple birds that squawk, hop in and out of trees, some simple frogs in the marshes/mud areas, camels in the desert, lanky deer in forests, cows in the plains, etc.
[…]
Some Cuttletrunks could be changed to “Pterodactyls”
Some Roadrunners could be changed to “Flamengos”

I mean, you tell me “pterodactyl”, I think “creature with wings”, at least. Is that being too hung-up on preconceived notions of what animals are?
Plus, you’re telling me this now, but you weren’t clear either in your OP…

In any case, I do NOT think this game needs more creatures… right now. Boundless not having more trash-creatures like sheep/frogs/deers/cows/flamengos isn’t the reason people leave the game. And it’s not by barely changing old enemies to make new ones that the players who are deep into the most PvE-challenging part of the game will want to stay more.

The Hunter creature which can fly and can apparently warp behind you is coming soon© so I wouldn’t worry about adding more creatures just now, anyway. Its art seems mostly done.
Plus, there’s been some work on parasite creatures which tend to sleep in blocks to be a problem when you’re mining.

But I do agree that it could be nice to have water-creatures and more variety… at one point. It’s just that, to my eyes, from the amount of work required to the actual benefits it would bring, it looks like something that should be explored WAAAAAAAY later when Titans and rental worlds are done.

If we’re really exploring the idea of more creatures, I think we just need time and more ideas like the Hunter and Parasite. Things that bring some actual gameplay.

Creativerse also uses standard block voxels, isn’t an MMO, and doesn’t need to program for PS4. You’re comparing apples and oranges. Boundless is far harder to program for than Creativerse, which is a Minecraft clone in every sense of the word.

Both games offer creative options the other doesn’t.

CV is a building game. Boundless also has a building aspect. That’s close enough of a comparison. What does it matter if CV is an MMO or not? What does the voxel thing matter? In CV, you have stairs and half-blocks too. Just not for every block, and they’re made differently. But still.
And I mean, you made lots of comparisons to Minecraft in the OP yourself. Is Minecraft any more comparable to Boundless that CV? Come on, creatures in MC are just cubes with primitive animations. It’s easy to pump-out new creatures for MC.
So don’t tell me I’m comparing apples to oranges.
Doesn’t make my point any less valid that this game could use more styles of blocks to play around. Tints don’t do everything.

What ever way you spin it, it’s easier to add more block textures to build with in the game than adding creatures, and I’m 100% sure that it would bring actual fun to more players than adding some pseudo-frogs/deers/cows or whatever.

I don’t have lag issues on any of the 50 servers for the game.

I am sure they most likely could bring a basic creature online into the game within a day or two if they focused on doing just that. After all, the Chrysominter was made in pretty much a day then implemented into test that same or next day.

Besides, we already have a meatshield creature already: the wildstock.

There’s concept art for some winged creatures and underwater stuff floating around on the forums. Along with worms and block parasites, So it isn’t like they don’t have their own ideas for what could be brought into the game. This is excluding Protectors that show up on Titans.

We could probably use some sort of dinosaur themed creatures like a raptor.

Give the wildstock a break and presto! We have a chicken.

What ever way you spin it, it’s easier to add more block textures to build with in the game than adding creatures, and I’m 100% sure that it would bring actual fun to more players than adding some pseudo-frogs/deers/cows or whatever.

You can’t be serious… that’s your come-back? Woah…
I mean, likes are meaningless in this context… you’re comparing the 1st post to the 19th post, which has far less chances to be seen.

Make a new thread with an actual poll to compare the two options of “would you prefer more variations of existing creatures or more blocks to build with”? Then you’ll see who’s right and who’s wrong…

I don’t have lag issues on any of the 50 servers for the game.

I mostly played back in September and October and November. The lag was horrendous back when each planet had 50 people on them.

I would rubberband into lava all the time as well as be defeated by enemies seconds after I escaped or killed them.

Has this improved in coding or is it simply improved because the playerbase is no longer so large?

Has this improved in coding or is it simply improved because the playerbase is no longer so large?

When the first exo-world was released not so long ago, it was full, people couldn’t get in. And if you managed to get in, it was unplayable. Otherwise, on normal worlds, it’s fine, no lag, because I’d say there’s usually an average of 5 to 10 players on each world, from what I’ve seen. Or at least on the worlds where there’s no big capital city like Eresho.

BUT they did change some changes server-wise with the Chrysominter update which apparently reduced the lag? Like, now, when you mine like crazy, the stone blocks that fall on the ground will clump together, reducing the number of blocks on the floor to render. That kind of things.

Metroid prime games had some serious lava baddies. If there’s a game that would dare inspire some boundless mobs, it’s this one. 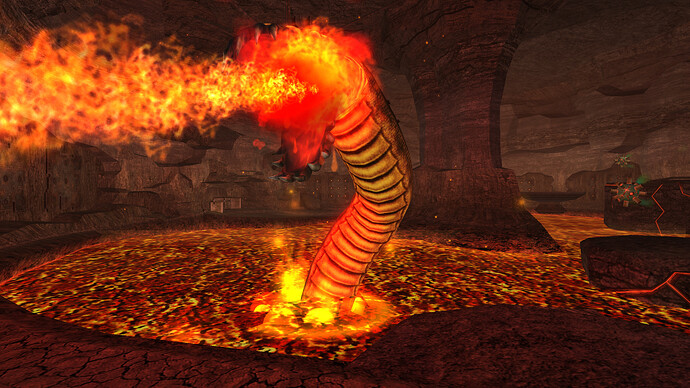 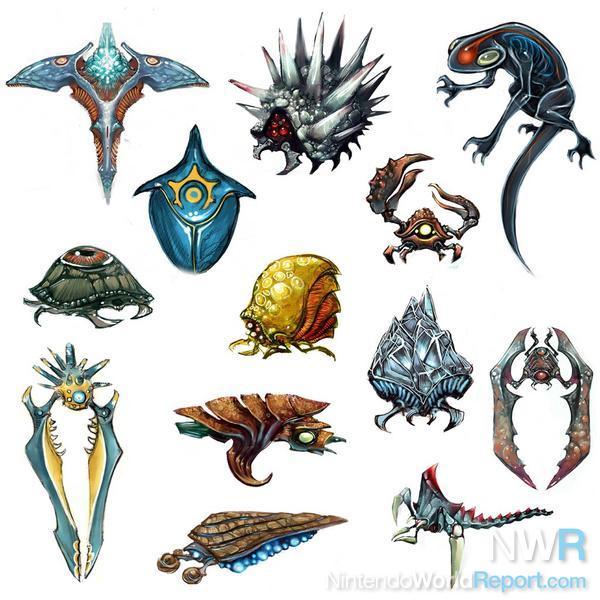 For sure some new creatures would be good. But I think they need to do whatever they need to do to work on gaining a larger stable player base. Theyre doing a great job already but like they say, Build it and they will come. More players = more money and if that meant they could expand their team then that would be awesome

Hmm now a lava creature would be very cool indeed i vote for that. And aquatic creatures. Would bring a new sense of exploration to oceans and lava lakes

the thing with minecraft is it just works cuz the combat and AI are both simple sword to the face or bow at range…not a arcing weapon that has a chance of jamming.

I’d like to know more about the npc in the sanctum. Why so quiet?

He’s probably got the best story, and therefore should be our king.

Tell us of your ways, silent observer…

I don’t build, I gather to make food and weapons. I hunt and gather, so to be honest, I could care less about more rocks. I’d like to see the leaves used for compound for fertilizer so they have a use, now they just take up room.

Pigs for meat and could be trained to dig up exotic yams out of the mud; level 4 and up. Turkeys for meat and feathers, They could be found on level 3 and up.

Bucks that could have antlers that could be used as horns in forging, replace one of the orbs for example.
Two, maybe three at most so it won’t strain the servers.

If we had clothes, armor, the skins could be turned into hard leather and used for armor.

Yes, we need more but This Is NOT Minecraft, and to be honest, I am sick and tired of it being compared. If I wanted Minecraft I would be playing that game, not this one. I don’t want Minecraft nor do I want a copy of it, and Minecraft isn’t the first type of game, there were others before it, but no one seems to remember that one, which should be receiving all the credit that Minecraft is getting.

But in the end what do we need even more food and brews for? How does that make the game more interesting for anyone except the players that like to craft? Is that not what all the recent releases have done? Farming, while it may turn out to be interesting certainly does nothing for the builder expect add some plants they can use to decorate a build. It does add another source of resources for the crafter. If the existing recipes are too complicated, require too many items or require items that are too rare, then maybe they should be simplified versus putting a lot of effort into introducing new items to help with the acquisition of those rare items.