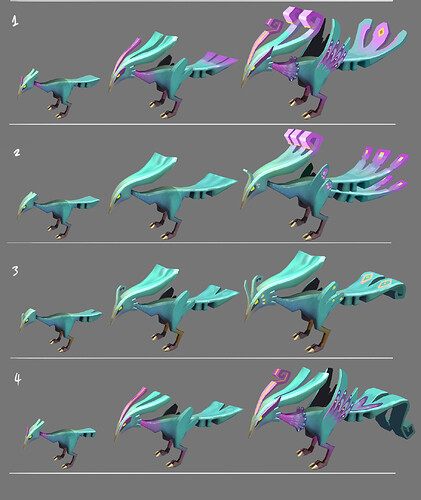 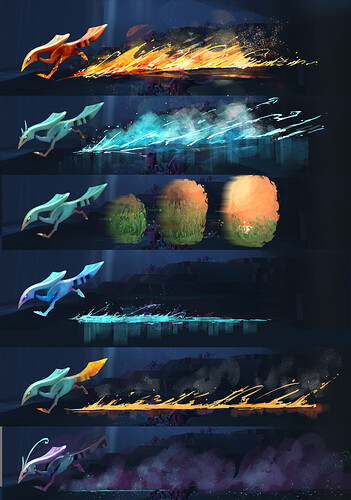 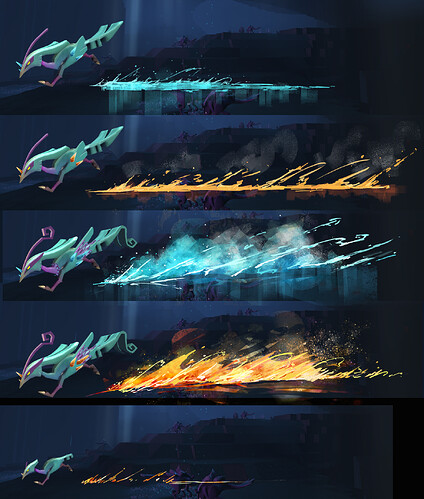 Wicked, the portal would be so cool. Trying to chase it down but instead ending up on an unexplored world with no way back

. the possibilities are boundless. (these puns aren’t ever gonna stop are they)

I love them all haha.

We’ve been focusing hard over the last 2 weeks to visually unite the creature progression design with it’s animation behaviour… so here’s a little more input so you all can have a wee glimpse into our minds!

The main consideration was how to show progression in difficulty for non-melee types. The hardest version of the Road Runner for example is harder to catch and therefore our progression is visually interpreted in ‘Flamboyancy’ and not ‘Armour’ like the Hopper which as a classic standard melee type.

In showing our creature progression plan to the wider team at ‘show and tell’ today - James’ summary to us in discussion afterwards perfectly depicted our thinking behind our work and what we aim to achieve.

PS. I hope he doesn’t mind this…but I couldn’t have explained it much better myself.

For me, it’s obvious that “power” progression of a creature should reflect the essence of the creature rather than simply be bolting on more armour. (We may still increase their armour in the creatures stats, but this doesn’t need to always be reflected visually.) Clearly the roadrunner can’t simply get faster and faster, but visually it’s “power” reflects the nature of it’s speed. The hopper reflects it’s toughness and armour. I think this is a good direction and something we should replicate across the different creatures we’ve designed. So progression progresses the nature of the creature.

our progression is visually interpreted in ‘Flamboyancy’ and not ‘Armour’

I think that the designs definitely reflect ‘flamboyancy’

4 looks great without being over designed, I guess I would call 4 the most elegantly fabulous one (~’.’)~

I’ll add the artwork to the collection.

These are so cool! The artwork to depict the different effects when the RoRu (

) is running are absolutely superb!

Out of all the creatures so far, I’m really looking forward to seeing these ones in game the most I think!

I see a new transportation system here:
Put skies on your feet, reins on your ice runner and ride on it’s trail!!!

Amazing! So so so original, nice! Haven’t been to the game in a while, has it had the C++ update people talked about? Not sure if it was the c++ but some “big” update in summer it was suppose to update the software of the game… something like that