This week we’ve released a Testing update that includes a 1st pass of the following features:

Full details of the Test 16 update are shared here.

Note: The update is currently available as a Steam beta under the name Testing.

“1st pass” basically means that it’s an initial version that we’re releasing early for players to checkout and offer feedback + complain about. These features are still in significant development, we ourselves are still working out how much we like a feature and how best to alter it. This means that your feedback is extremely valuable.

We have started to work on 2 huge features of the game:

When we have more visibility on when we might have the 1st pass ready for preview, we will let you know.

Whilst the World Builder and Generator have already been updated to support Wrapped Worlds, we’re now deep into updating the game to correctly support the Wrapped environments. This is more challenging that you might first imagine: projectiles, navigation, visibility queries, creature AI, physics, basically everything needs to respect the Wrapping. However, we’re making good progress and hope to release an update before the end of July. Watch this

Code
Dual wielding is nearing completion, with the radial menus for equipping left and right hand being added. The GUI has been fixing up issues and improving usability with the first version now on the testing branch. We have also worked on the storage and item placement on them. We have started work on the trading plinth so you can sell items to people.

We have started some of the groundwork for world wrapping, that will remove the edge of the world. The day / night cycle is being reimplemented with separate moon and sun configurations. We also added level of detail to some of the meshes, this will help performance when items are farther off. The engine work has continued with migrating the shaders and fixing up issues.

GUI
Now that the panel GUI is nearing completion, we’ve turned our focus to the HUD. We’ve been focusing on what information is going to be most important, and where to put it (avoiding obvious overlapping issues and using the same scaling logic we do with the panel GUI.

We’ve mocked up a bunch of different scenarios below so you can get an idea of how it’ll feel when you’re playing: 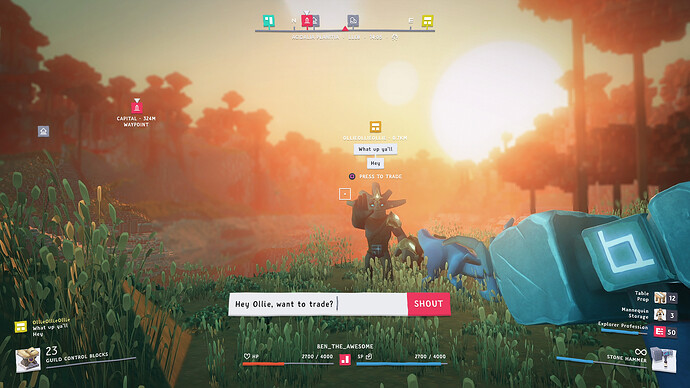 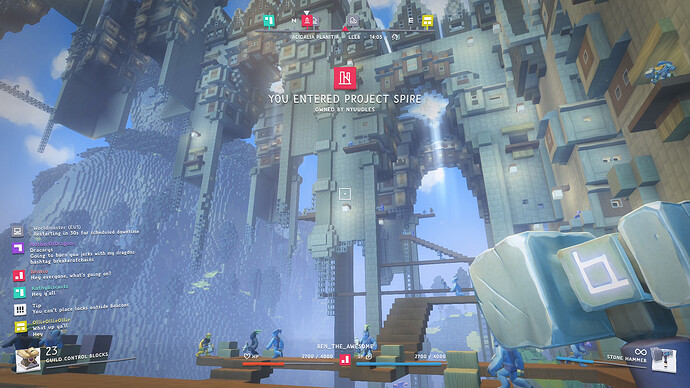 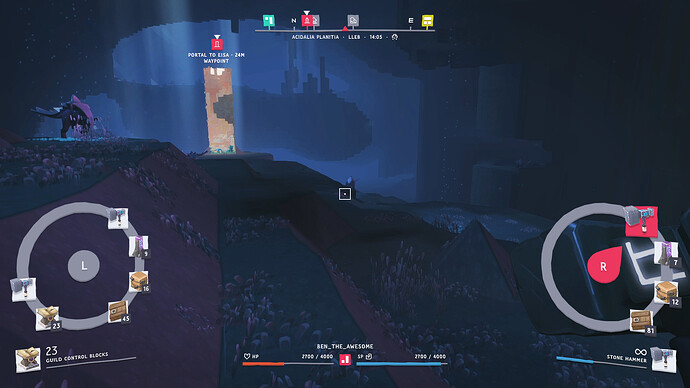 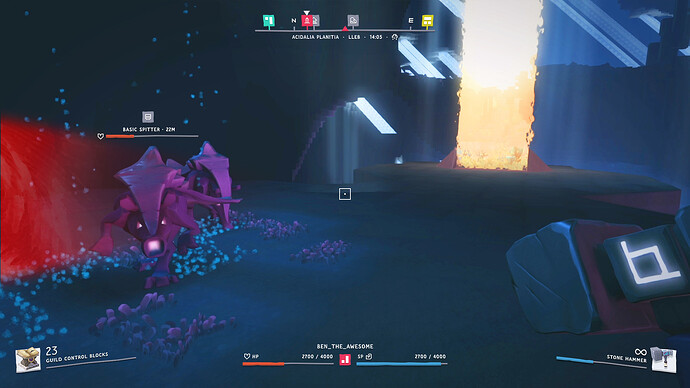 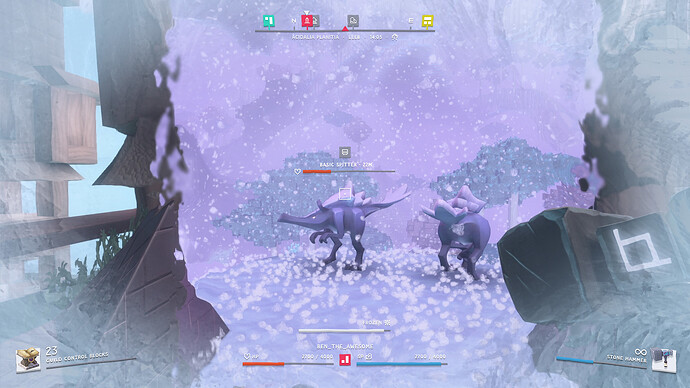 Finally, here’s a flat version that includes almost every element in one screen: 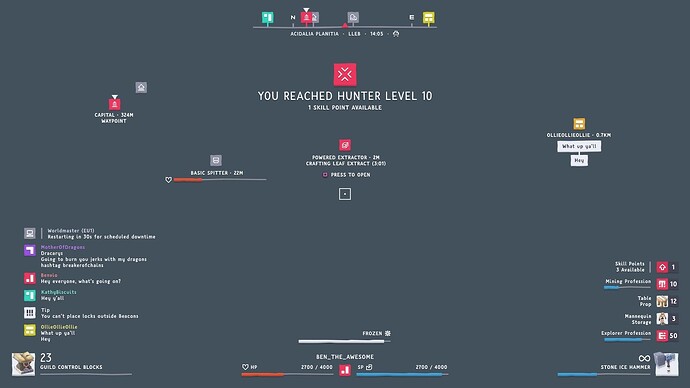 Art
The Art team’s main focus has been preparing for this week’s storage release. Other areas have seen good progress in character and creature pre-pro and creating tool benchmark assets.

Here’s our first character exploration concept. We’re very excited about the prospect of seeing some of these cool designs in action. We will make a character shortlist based on the community and team’s feedback. Whilst the Character Race concepts are all currently male there will be a full set of female variations that match the concept and design.

Creature work has continued apace. Here is our proposal for Roadrunner progression. The design gets more flamboyant and not armoured like most of the other creatures to show power status. The creatures progress will be inspired by the essence of the creature: toughness, speed, stealth, curiosity, etc. We like the idea of the elemental Roadrunner types leaving a trail of elemental ice or flame (or whatever) in their wake.

We first saw the Hopper in last year’s trailer sneaking to the world through a portal. Here’s the progression concepts for this creature. The Hopper is tough and temperamental. How will you destroy them? Or maybe they’re a handy tool if provoked and controlled skilfully. We’ll be prototyping the movement of this angry critter in game soon.

We also shared a post about the new Storage shelves. The Storage system is customisable allowing us to offer many different props that can act as storage. Here is the shelf storage concept: 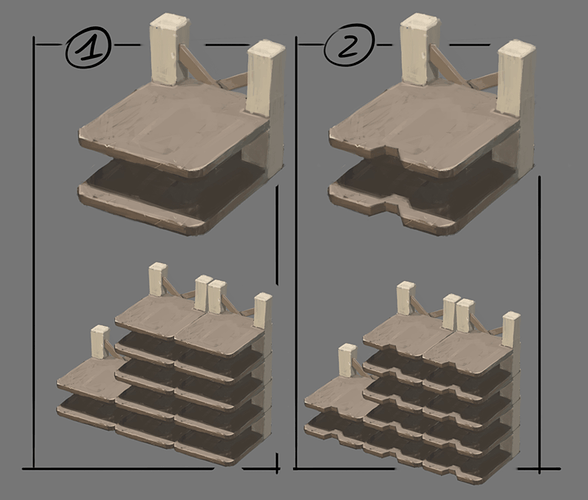 Now we’ve decided on the progression language for the Boundless tools and weapons we’ve completed a benchmark asset set for the hammer. We’ll use these assets as standards for all the other tools and weapons. 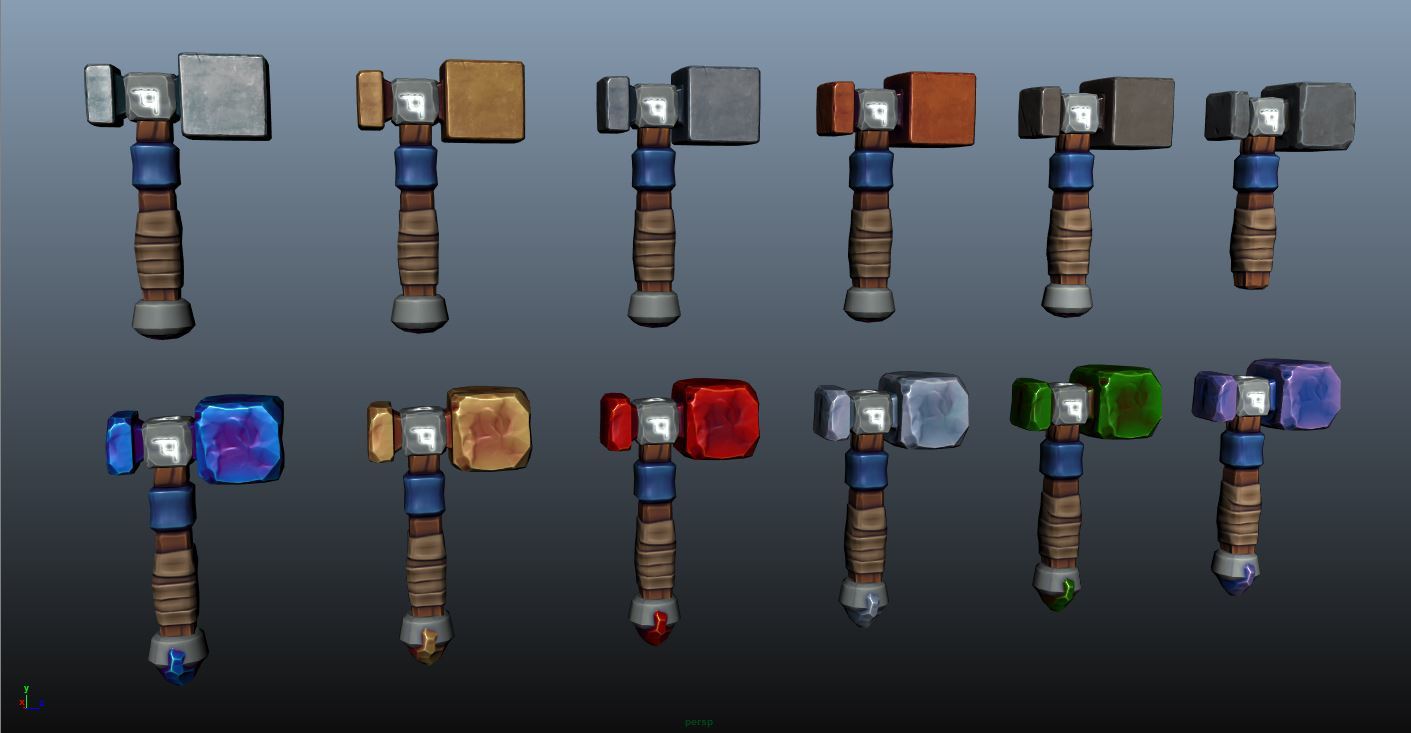 The Cuttletrunk has too many limbs

- everyone will love it.

We’ve also just started working with a new sound effects (SFX) designer who will begin fixing the shoddy state of the audio in the C++ version of Boundless. Hopefully we can catchup quickly and start filling the worlds with … wonder!!

Im so excited! Your progress has been amazing! Gj guys.

I’m wondering why the hammer is so low poly now? Tbh i prefered the more detailed one

Can we disable the UI? I think it would be a bit cluttered with lots of players in one area, could we move things around if we want?

This is really cool, here’s an idea, on anything including the blocks on tools with the ort glyph, could we customize that glyph to be the guild symbol or player icon?

Awesome devlog, can´t wait to get my hands on the dual wielding feature.
Though I have to say that I think that the status effect seems a bit “underdone”.
It would be cool if there was a more intense initial effect that wears off to the base effect within a short period of time.
Something like this for blast as example:

Oh man, the radial menus for weapon switching are going to be awesome on a steam controller!

yes this would be awesome! and the more you get frozen status the more the screen fills from ice and Vice Versa

. And @Vastar has a very cool idea! I’ll add all these things to the collection.

The HUD looks amazing. If the dualwielding is also properly implemented for keyboard and mouse I’m as happy as it can get^^

I’d also prefere the status effect @Vastar showed for more sudden things like a blast.
The one in @james’picture is good for steady things like the cold wind the character most likely feels when standing in front of the portal to a snowy world.

- everyone will love it.

if i made a song that would be potential track for the game (royalty free) is there possibility that you would use it in game? or you only work for “bigger studios” and use only those?

if i made a song that would be potential track for the game (royalty free) is there possibility that you would use it in game? or you only work for “bigger studios” and use only those?

We’re working with a young independent composer called Peter Gregson - not a bigger studio. He’s composing and playing all the music. Wait and see how the music sounds - as we need it to be really cohesive.

But if you wanted to create something that is inspired by Boundless - go ahead and share it with the community.

Did he also made the music for the old Oort Online trailer?

Did he also made the music for the old Oort Online trailer?

Yes - the trailer was the first piece he did for us. He’s been composing (part-time) since then.

Omg… YES!
The Oort Online trailer music was so good!

The guy has built up quite an impressive reputation. When they say that they like his new compositions even more, I doubt anyone will be terribly dissapointed!

I’ve been following the b< twitter for months, ACHING for a teaser track or 8 second clip.

13 posts were split to a new topic: Fan made music inspired by Oort/Boundless

speaking about weapons, would we get a two handed sword, hammer and axe, and hand to hand/fist weapons