This update is accessible via the Steam Beta “Testing” release.

Today we’re finally releasing the first version of Storage, Locks and an updated GUI. Have a play and let us know what you think. We’ve reimagined how storage works in a sandbox game. Instead of presenting a chest where everything is logically storage within the chest and hidden from view. We’re presenting an open storage solution, where items are visible on shelves or the Boundless version of chests. Remember that you need to include locks on the storage if you don’t want people to help themselves. But if you don’t want to lock each storage unit, consider locking the room that contains the storage instead! When you access a storage entity, the GUI will give you access to the storage units surrounding it so that you can quickly move items between the different units. We’ll be reusing this system to offer many more alternative storage props, for example, allowing item placement on tables. 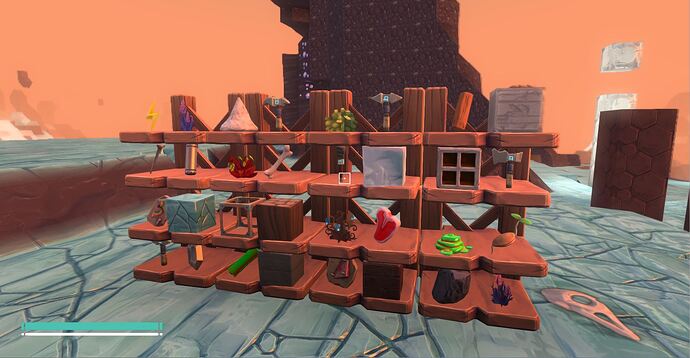 The GUI is the first release of a major update that prepares the GUI for all the functionality we have coming in Boundless: guilds, professions, titles, beacons, friends, wearables, maps, furnaces, power cores, forges, machines, trading, locks, selling, portals, warps, and citizen creation! A huge amount of work have gone into these foundations, it’s visually scaleable and still needs a lot of spit and polish.

The first stepping stones for crafting are also included, although it’s very early. There is a small set of recipes, all of which are currently using the hand crafting interface because the machines are not yet ready. It’s all a bit rough around the edges, but the rest of the crafting will be built on these foundations.

Please be aware that we’re going to start announcing known issues with each release. These are issues we discovered whilst testing the update but decided to fix after the release, rather then delay the release.

Breaking stone without a tool breaks the block, but nothing is dropped. Breaking it with tools works fine.

Shouldn’t that work just like that? Where is the issue in that? 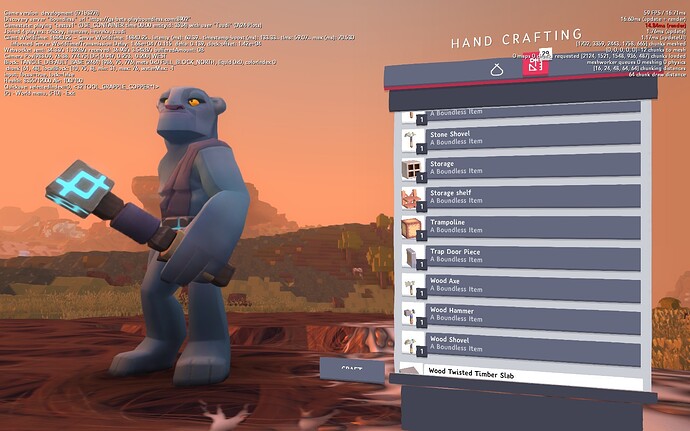 I can chop wood with bare hands but not with wood.

Can’t scroll down to the absolute bottom of storage window, so it cuts items off slightly… 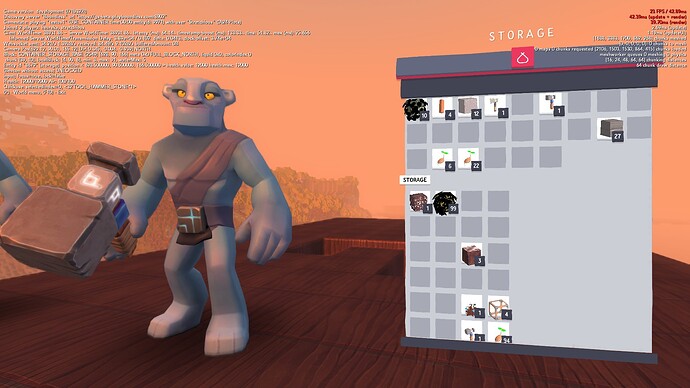 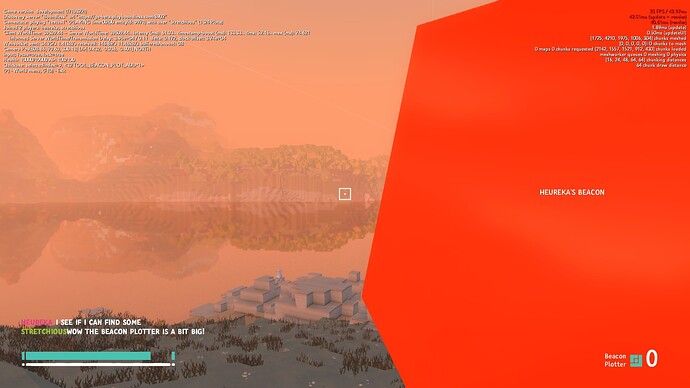 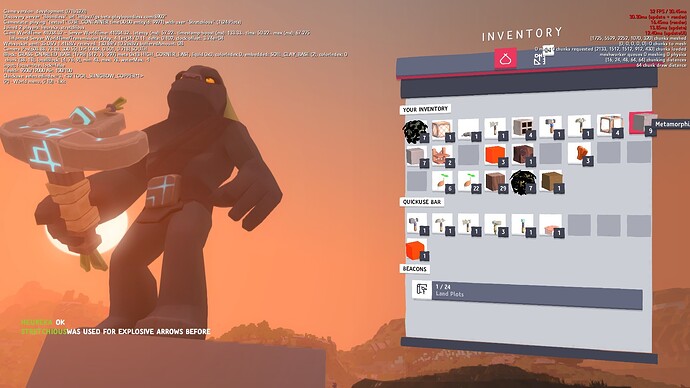 I’m guessing this is just lighting / texturing differences when held / placed? (This is the same block) 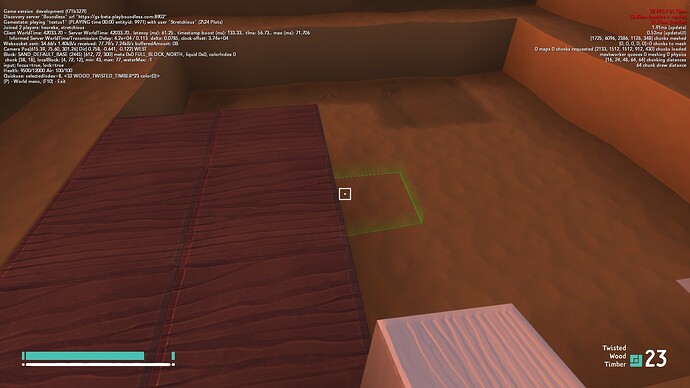 I can’t drop anything! Bwaaaaa! 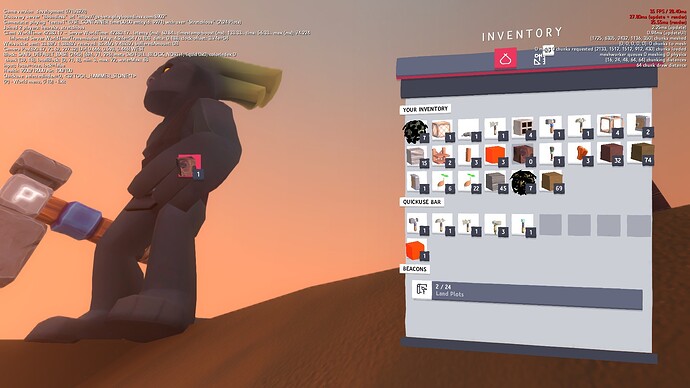 Also, an important one… a BUG!
I had a full inventory (as a result of the previous image!) and didn’t realise… I was still able to craft metamorphic bricks, which took my resources, but didn’t appear in inventory. Now when crafting more of the same brick, and actually having space in my inventory, the crafted items still don’t appear.

UPDATE: Logging out and back in again fixes the above issue, and allows me to craft the item into my inventory again now.

I crafted some cooked meat that disappeared, until i closed and reopened the inventory.
Some shaking and jumping in the background with the avatar, when inventory is open.

And same as above, started to craft things with a full inventory, the crafted items disappeared.
Only way to drop things is to put it in stores.

I like the moving inventory when clicking on it to be optional, make me a little seasick.
And a option for the chat window to stay open would be nice.

Well,expect a new video from @Squidgy probably,and me very soon!

Just hit a crash - where are the logs stored on OS X?

How do we scroll on the recipe list on a controller? 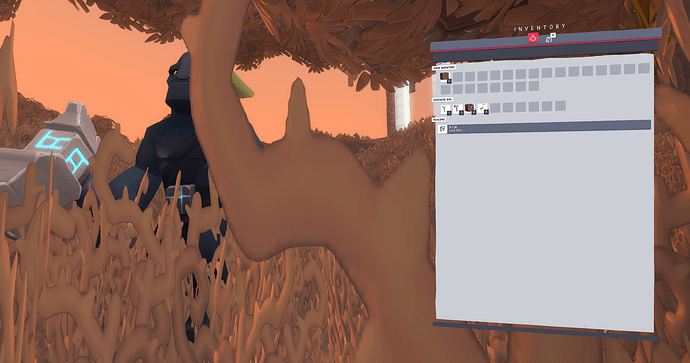 You can actually drop items by left clicking them and selecting drop.

We’re going to add an option to set the scale of the GUI e.g. you’ll be able to increase it’s scale on a high DPI screen so it doesn’t look so small[quote=“onebitknightly, post:11, topic:4634, full:true”]
How do we scroll on the recipe list on a controller?
[/quote]

Well spotted - again, as this is a very early version of the new GUI we’ve just not had time to handle all the special cases properly yet - we’ll get round to it soon though.[quote=“Stretchious, post:7, topic:4634”]
Can’t scroll down to the absolute bottom of storage window, so it cuts items off slightly…
[/quote]

Another good spot - the whole placement of the storage slots needs work - they need to be centered and aligned to the top of their section. I’ll make sure the bottom padding is done then too.

Thanks for your feedback (keep it coming), some of these issues are already fixed and you’ll see them in next weeks update!

When crafting, the “can make” list often reshuffles as you make more component items such as stones or planks. Quite frustrating! Can we please have the list of craft ables keep its order some how?

Improved rendering through portals and on reflections (normal textures are now rendered).

Seems that there is a small problem … 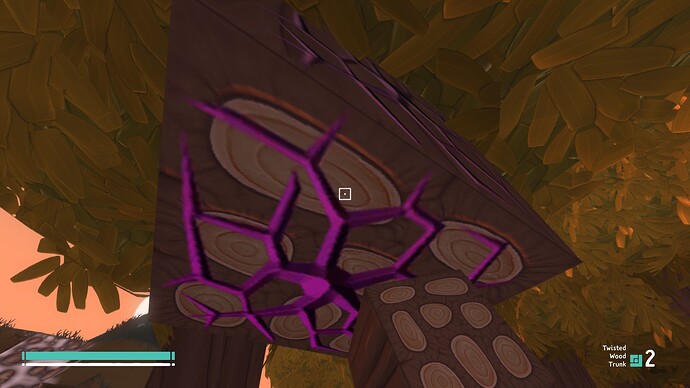 Depending on the angle you look on a block that is damaged, the “damage sign” looks “purple” and not “wood brown” like it should if you look directly on it.

Perhaps they could add different categories for craftables.

And if possible make categories collapsible.

Last but not least i like to say that i like that you released the update even if it’s not “perfect”. This is a good step into more frequent releases / updates.

PLEASE DON’T WAIT AN OTHER 3 MONTHS FOR THE NEXT PATCH.

Thanks for feedback. The crafting is a stepping stone to the final solution, it will be quite different when we release the machines.

Don’t worry, we are trying to do our best to keep our release schedule at its current high rate.

I crafted some torches today, but they never showed up in inventory.
Also got stuck in a door, when i closed it as i stand in it.