So as some know, I have a small army of alts… that now n then make their appearance to be +1 to make the spawned gleambow meteors larger :-p

I found that I could replicate the grapple / chest / menu or ( any interaction really… ) have the same out of sync swaps. the Grapple bounces between a place I was x time ago vs where I aimed. I did that on my main account running full screen on the pc without anything else running.

But only on AUS planets ( thinking anywhere I can hit 200ms or more in latency ) I play from the EU. Can add USW to the list also

but still easier to cause on AUS

Also if I go to Sanctum on that planet and come back, no issue. Not until I have been through some portals and come back.

I then started to boot up some virtual machines to try and log alts, and none of them showed the issue ( ran all the same spot on AUS )

then started to swap 2 of the alts out with my main account and my crafter account, which are the “oldest” I have with lots of guild memberships, beacons, friends etc etc… which none of the other accounts have.

And the only 2 accounts I can make the issue happen on is the first 2 mentioned, the grapple starts bouncing around, it was the easiest visual clue to replicate.

Alts of the main account + 2nd can also show the issue. ( but much much harder to replicate… some I hardly ever succeeded in making it show)

It can be reproduced 99% of the time on my main char and 2nd accounts main, the only diff I have seen towards it not occuring would be slow initial movement… but I think that is more random timing than anything.

The major difference between the accounts would be the age of them, the friends, beacons, guilds they are members of.

a gif snip of it: 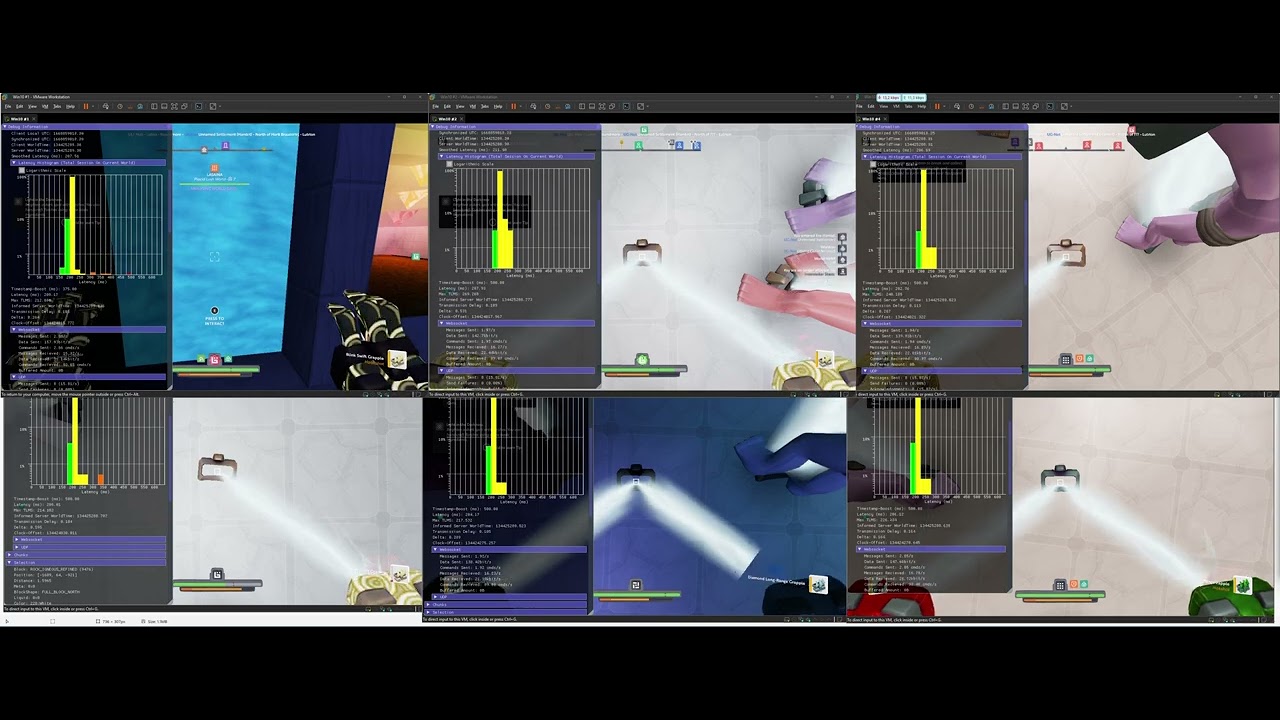 The 2 clients with the bouncing, also appear at the location where their grapple bounces to for other client

Random shot in the dark… too much information being synced on the side or trying to, which brings client / server out of sync…

Addon:
Found 1 alt on my main account with no guild afflictions… no issues so far… and loads a bit faster on portal transitions. 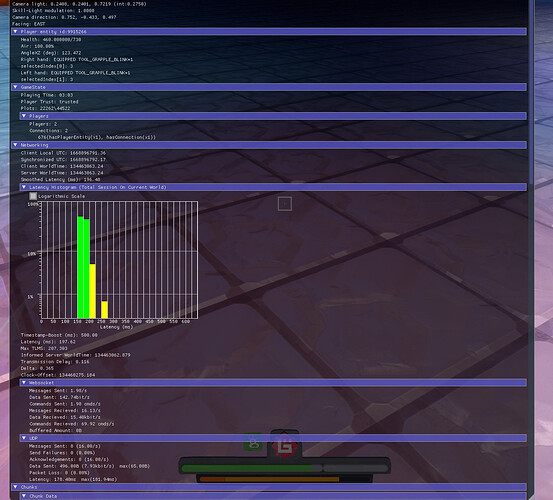 This is a nice post not many players could provide so much data. Hopefully it help point towards an eventual solution.

1 Account difference between 2 Characters my Main the “whale” and a newer char with nothing owned by it… (beacons, friends, guild etc) 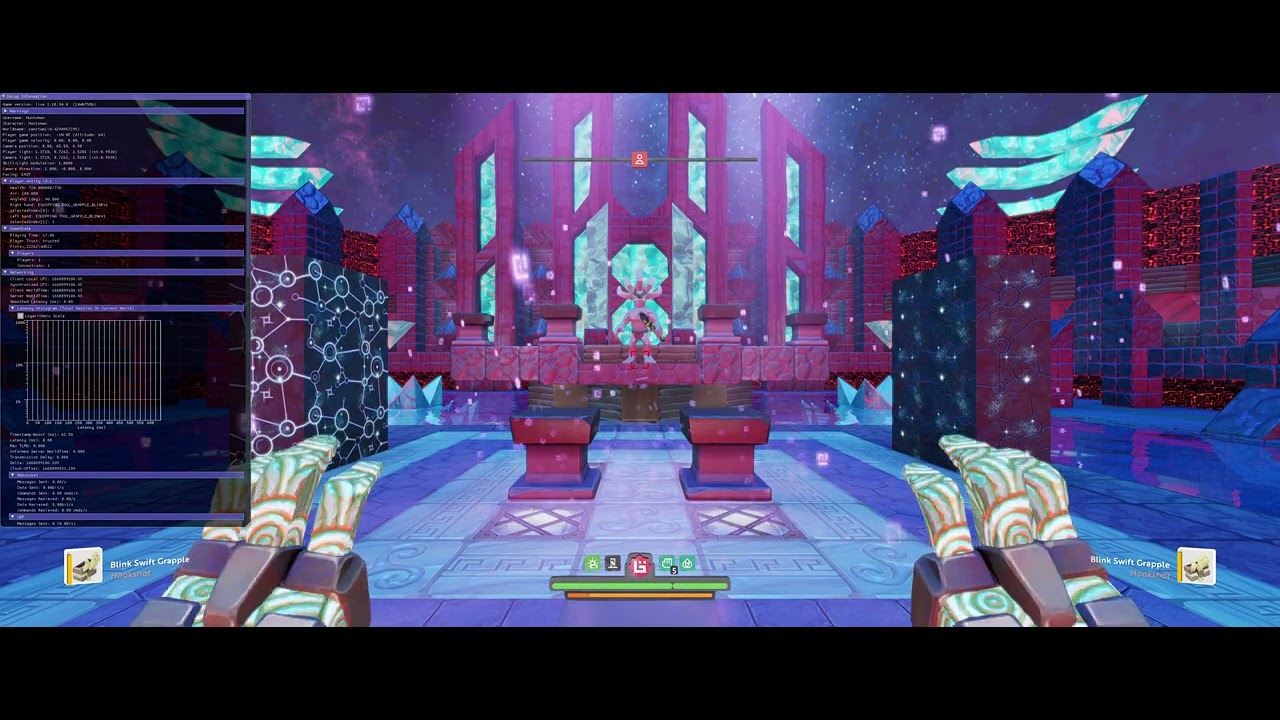 The first two minutes showing no issues with the “newer” alt, then at 2:11 swap to Huntsman on that account, and demo that if you enter on the planet from Sanctum ( not from another planet ) then it is fine, but once ( at 3:02 ) I come back from another planet… massively desynced

At least I am having a hard time saying it is caused by latency itself when 2 characters on the same account can have different experiences. But will say it seems 175ms+ seems to be at least part key to having it happen at all. As I have never seen it on EU ( playing from EU) yet

Someone flick on a checkbox for anything networking related at the cloud recently ?

Have been testing this issue on Lutrion with Minipower and Huntsman and we were watching each others Discord streams while doing the testing.
We can clearly see ourselves in different places on each others stream to where we see ourselves on our own screens. Furthermore, I ran for something like a 400 to 500 block distance out of the hub and yet could still see myself on Huntsmans stream as being inside the hub.
They were also able to grapple me at this distance through the hub walls ( as it appeared on my screen) so I obviously wasnt where the game was showing me on my screen.
When I continued to run directly away from the hub I eventually came to water and started to swim across it and got to a point in the water where I was stuck and the screen was no longer rendering everything (similar to the issue we got with using gleampops originally where we appeared to run out of land rendered ahead of us).
Also while trying to grapple either of the them while in this condition resulted in my grapple going through them and grappling whatever was behind them. Eventually Id be at a point where my grapple was constantly glitched out and continually pulsing the grapple line complete with sound etc.
Only going through a portal or returning to sanctum and back seemed to resync my character, which then began to get out of sync again.

Edit. Forgot to mention my region is EU so being on Lutrion gives me a ping of around 175 to 200 plus at times.

I’ve sent this on to the team; thanks for taking the time out to put together this detailed information.

Can you test again on the Australian world - Lutrion?

If the de-sync happens then please send us a game log from the session.

Actually just did few mins ago, still issue. But redoing and sending log then

it’s in your PM’s

Can you confirm you’re doing this test on a native machine - and not in a VM? 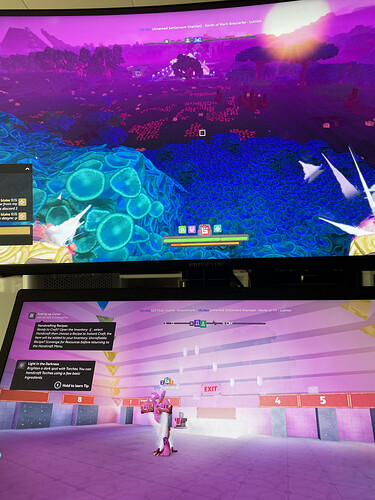 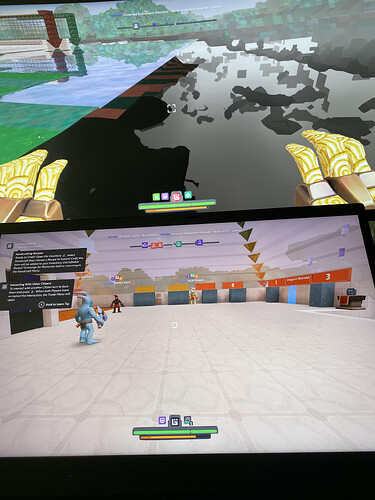 remember the old puzzles where you had a “ghost” or shadow of yourself in the left box with a labyrinth in, and you had yourself in a smaller box next to it… and by doing movements in that box you were to bring your other copy out of the labyrinth. kinda how it feels there is that shadow of yourself that just doesn’t quite keep up, and that is why it gets stuck on a corner and the client just happily runs ahead… while your server location is back there stuck on a corner

I think James said it doesn’t happen when coming from the sanctum but can happen from portals on other worlds. Can you reproduce it and list the specific portals you entered the world from when it happens.
Also I assume it’s immediately desync’d when it happens?
At the moment everything server side appears to be behaving normally and from our clients it’s also seemingly all correct, I need to find some way to reproduce it so I can debug the client to see what’s going wrong.
So I need specifics of how you entered the world, which world/portal it was from, what percentage of times does it happen etc

95% of the times coming from other portal to this hub, usually works best if I take a stroll past Eresho and then come back.

easiest way to test when through, look straight down… shoot grapples into ground, if the grapple head doesn’t jump around you are good, if it does… well desync

And to be fair, I think any portal where I have 150ms or more to can do this. Seen on USW worlds and AUS so far. ( So in this case ULT Eresho => Lasaina => Lutrion )

I can however swap to a different Character on this same account, and no issues what so ever.

random thoughts of the day… the old broken guilds or the 1-Way friends if that can cause any sync issues.

1-Way friends = my Friends list is full, they send a friends request, I accept, they see me as friend and have me added to their list, but I don’t get them added to my list and I can’t see them as friend ingame either

Broken guilds, guilds where characters randomly was pushed out for some reason ( aka there is no leader, and I am just a peon member… can’t disband as I am not leader of the guild, but I am the only member)

Other guilds appears okay beacon wise on some servers in the guild book, but on other servers the guild book is empty for the beacon list.

Not managing to cause it on Imdaari… so far at least…

Is it not obvious when you test even without the grappling though? since you come out the portal and you’re stood somewhere not in the actual hub?
i.e. I assume you’re saying you don’t come out where the portal actually is
Assuming that is the case before you even go through the portal when you look through it is the other end incorrect?