Can anyone help me figure out what paint mixes with:

I find it really hard to use the mixing excel sheet. I would appreciate any assitance.

I think you’re being summoned @wakeNbake

Lol, I love how wake is totally a summon

who dares summon me!

Cherry can not be mixed 1 to 1 with any of those pigments. Cherry is a mixture of Red and Rose. All of those colours you have listed are cherry mixed with some black pigments so they are all darker and also less saturated versions of cherry.

There are unfortunately no pigments lighter than cherry or as color saturated as cherry to mix with. So the best you can hope for is to use those colours as “fillers”.

For example, you can mix 36 Strong Cherry with 100 Cherry and you will still get Cherry paint. If you add 37 it will change the result to Hot Cherry.

So without a lot of pure Cherry (or Red or Rose or Fuchsia) pigment you will not be able to make Cherry I am afraid.

Lol, I love how wake is totally a summon

Haha, I was going to reply anyway… once I had finished my dinner!!

I think you’re being summoned @wakeNbake

And of course I cannot ignore a summons

I have a steady supply of rose, so if I mix rose with something else it will give cherry?

A visual should help here 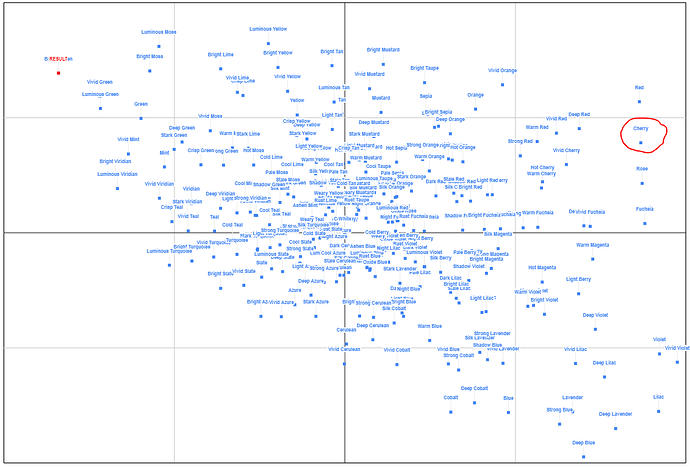 This chart shows all 255 colours, it does not show the lightness or luminance level of each colour but that’s another story altogether…

As you can see you would have to mix rose with red in order to make cherry.

Ah ok, so it has to be those 2 colors. Alrighty then. Thanks @wakeNbake

You can use other colours in the mix, but only so much before they will “water down” the colour too much.

My question on this, where did you get the chart that tells you the mixing results

The devs gave input on one of the topics about goo farming. I’ll try and find it. Tho @wakeNbake will probably beat me to it. As he’s been pretty invested in the goo farming from the get go and was trying to figure everything out down to a science

This is an awesome thread. As someone who was running a goo pigment shop selling everything possible, this’ll definitely be handy if people ever request stuff

[image] Hey friends! Based on the information I got in the Goo Color Wheel thread, as well as an insane amount of help from @lucadeltodecso, I’ve been able to put together a Color Mixing Utility to help predict what you will get when you mix certain pigments together. You can find the utility here. You’ll need to make a copy for yourself to be able to edit it, but it’s pretty straight forward. You put your first color in top, and then your second in the bottom. The utility calculates both wha…

Here is the post that shares the spreadsheet for mixing and other things goo related.

The mixing bit has always given me a headache. So hard to figure out and not entirely intuitive since it is based on a different color spread.

I just mass produce and hope for the best mostly. Target with gleam and not mixing 99% of the time.

based on a different color spread.

? what do you mean, its just a weighted average of the colour of the input dyes, then picking the closest

@lucadeltodecso yeah, but those values are not in the game or visible to the player. It would also not be intuitive to a lot of people I think. There are a lot of technical people (with programming/computer skills beyond a normal player) that play this game so I think it is easier for them to understand and deduce it.

But as an average player with no programming or technical understanding on the backside. If that exterior spreadsheet hadn’t been made, there would be no tool to know how to reach the color one wants to produce for an average player.

But I suppose I’m actually a sub-average player because I cant even figure out the spread sheet. Haha. Sad I know.

An in game tool for the average people (or sub-average person in my case) would be greatly appreciated to know how to reach colors I want and how much of specific colors I would need to grow in order to make that target color. Color mixing is the only part of this game I cannot get a handle on, so I just keep expanding my farm for more gleam colors instead.

Some way to say I want this color, then the game says okay you need this and this mixed together to get it, would at least be a basic gradient explained in simple terms in game for a player like me.

Edit: I know this is ironic because I sell paints in mass on angel 1. So call me weird I guess, I just kept growing my farm and at some point I was too far in to stop. So now i just produce paints as my second job. Haha

But if you could see if you could get something in game to help me out in mixing understanding it would be much appreciated.

Hopefully this update to the Boundless Information Station will be of some use to you, in your struggles with the paint mixing and goo mutations

Exactly! This is the type of tool that is needed in the game and that should have been implemented when paints was released, a 3d way to represent what is put in and what will come out, also if i were to click on a color would it tell me what the 2 closest colors are that could produce that color?

Since the color sheet or whatever it is called is a 3d model of colors, there needs to be a way to train people in game how to mix the colors they want.

Call it a “starchart” for paints if you want, that is how my brain is thinking of it. Like little dots connected with lines. And showing how to reach them. Obviously not the only way, but it would be like basic paints understanding at least.

@DreamEvil this will be fantastic for a resource, can you let me know when it is active and i’ll try it out?

Edit: the paint mixer tool that dreamevil has created is exactly what we need in game. The advanced view with the 3d grid and the ability to play around so that we know what is needed to get the desired outcome.