Simply; letting players craft a placeable ‘Taxidermied’ model of each enemy monster. I figure it’d require a different amount, depending on the tier of creature, but it would allow for some pretties-up builds without the price of creatures wandering about or possibly killing you.

Plus it’d open up the chance to let you upgrade them 1:1 (plus metals) into solid metal statues of the respective creatures.

A small foundation (possibly indicated in hue by stones/timber and 3x3x3 ‘block size’ of the placed statue, seems like an easy way to avoid clipping issues, and prevent a swarm of mighty wildstock statues from standing in a tiny space.

For instance, a mighty Cuttletrunk could require a set amount of every resource on the drop table, such as an elite Wildstock needing Horn Trophies, whereas a basic Wildstock wouldn’t need milk sacs nor Horn trophies.

An addition to taxidermy could be plushies, but I figure they’d use rice/cloth/leather instead, and would just be a 1 block placement, rather than a full scale model.
I remember there was some concept art recently that had a spitter plushie on a shelf, so the idea might not be too far-out.

I am pretty much for any additional decoration Furniture item excetera excetera. I think it’s a great idea

Hiding stuffed elite cuttles in every dark nook and cranny to scare the butts off of guild members.

But… I do want a hug emote for my fave runner plushie then!!!

I’d even like a huge resource sink recipe to place a 2-3 plot tall/wide creature sculpture.

I mean I’d prefer to have a blueprint made from other creators that I could buy from them and stimulate the creative/building side of the economy but if that’s not a possibility a recipe would work as well.

I thought this was already going to happen, sometime, soon, I hope. 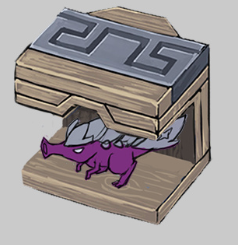 Okaay let’s see what I got here… [storage_closed_sets_01] [decorative_prop_proposal_03] Some stuff I’d been exploring the past few weeks.

I thought this was already going to happen, sometime, soon, I hope.

Just looked at the date on that post, I didn’t notice last time.

It’s ironic but whenever I see a post like that I just assume it’s 2-4 years old and bail out.

This forum keeps ya on your toes!

That’s what I was referring to in the post, yeah.
It’s adorable.

OH this is super cute and I would LOVE to have plushies of the mobs I kill as trophies that can be displayed on shelves, and placeable!!