Ok. Maybe not everyone. But most people seem to dislike it, and in fact I can’t remember ever seeing any for sale.

So I decided to test some. I had a go at using some affect Random adjacent hammers. They had about 7.8k dmg after all the skills and some damage boon and so can 1-shot normal blocks and 2-shot ore in T6.

I actually quite liked them. But they did feel too slow vs using a 3x3, with or without a brew. Not to mention, the hammer got used up a lot more than a 3x3 would have done for the amount of loot I mined… Currently I’d only use this for “casual” or “relaxed” mining, not for serious mining adventures.

A hammer like this is still technically better than an unforged hammer if you aren’t using it in building, but things aren’t always about technical details…

Now… The point of this topic is to discuss ideas that could make the AoE 5 boon actually be worthy of staying in that position.

Firstly, these are the two main issues that I personally had with this AoE boon:

I think that AoE 5 could be a fun boon, but it would need some changes… Here are my suggestions, they are not mutually inclusive and not mutually exclusive of each other either:

Please add your own suggestions on how to make the current AoE 5 boon more fun. Try to make your suggestion relevant for AoE 5 to remain as 5. Don’t worry too much about the balance of your idea, that’s for the game mechanic designers to figure out, after all.

I know you might prefer it didn’t exist at all, but it does, so let’s see if the devs would be happy making it better instead of the idea of simply removing it…

And finally, yes… I’d still rather have more content like farming than see a change like this. But it doesn’t hurt to throw some ideas around.

Hm, extra post in case there are enough ideas that it makes sense to consolidate them at the top.

I used to use the random ones as an off hand for getting those few ores I missed with my 3x3. But I no longer care about saving dura so I quit

Although i kinda oppose any change to forging now, improvements are excluded from this

. Maybe make reaching level 5 of the boon require waaaaay more points than normal boon levelling but make it a 5x5 hammer (instead of random). Maybe make it so hard to reach it (using typical forging methods) that you’d have to sacrifice levelling up a 3rd boon to any useful level in favor of getting a 5x5 boon? (just to avoid having OP hammers unless you really spend a fortune forging them to max levels)

Although i kinda oppose any change to forging now

This is only a discussion, after all.

I hate it too. It doesn’t make sense to me why the highest level of a boon would essentially ruin the gear. Why not just make level 5 cost more points, like stated above, and add a few more percentage of damage back, or give it a new effect, like making it 5X5, but only the outer edge is random.

Or swap it and move them all up and make current level 5 the level 1.

Or swap it and move them all up and make current level 5 the level 1.

Honestly if they did this, it’d go a long way to making strip mining less powerful. "perfect’ hammers would be more difficult/tedious/expensive to make and maybe we’d finally see a price in line with the damage they do and the time/power it should take to craft a tool so devastating.

But good god, can you imagine the moans and cries if that were to be the reality in a future patch? The game definitely begs for that balance but who knows with the chrysominter now. A lot of things arent out of reach of people as they might have been previously.

Actually, I often cut my forges short so that I don’t get AOE lvl 5. I also don’t use a 37 round method or shoot for a perfect damage 3x3 hammer.

I am a fan of the quirk mass craft production of tools. Good enough to farm t6’s at a reasonable pace/rate for a fraction of the cost of the single forges some people seem to spend time. 37 rounds seem low compared to some of the ‘perfect’ forge rotations ive seen.

I mostly just use pure boon with unstable or draining as a complement. I don’t craft quirks though, or defects. You are right 37 might be very low for some methods.

Edit: I am normally happy with a devastating 6 or 7 though and if i get durability, it is just a bonus.

My friends use their perfect forging methods and they do get very reliable results I suppose.

I have to wait longer if I want to make the 3x3s myself, as I tend to wait for the stars to align as you can see here: 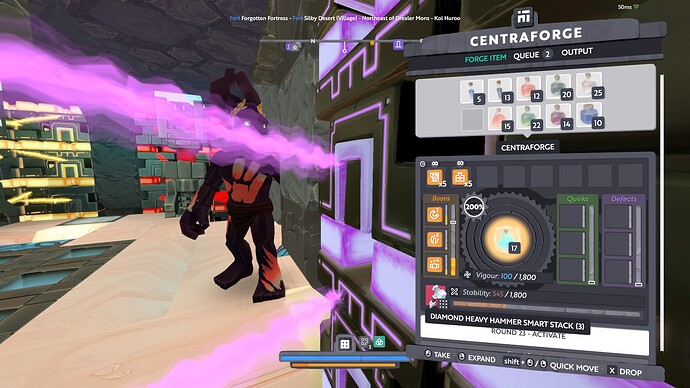 I have a very plain deck and haven’t even been using deconstruction resins until recently, so you can really discount them from the deck if you like.

Actually, I often cut my forges short so that I don’t get AOE lvl 5.

I normally do this too, but I have actually started to keep Random pattern AoE when I feel that it’s an overall decent forge.

Typically, I’ll only do 20-28 rounds on any given forge. I could probably adjust my methods but to be honest these are the components I’m happy making on my own without too much time invested into the gathering.

Actually, I often cut my forges short so that I don’t get AOE lvl 5. I also don’t use a 37 round method or shoot for a perfect damage 3x3 hammer.

Same as me, i typically end my forges with at least 300-500 stability without using a stab paste but don’t want to risk getting rank 5 aoe. I could probably push it further if aoe went to rank 5. That might be the point of them making rank 5 a boon that no one wants.

I usually get damage 8~, t5 durability, and aoe 4 pretty routinely.

The only thing that I don’t have control over is the quirks, and as of yet I havent had a quirk that has been too much of a pain in the rear. Sure Bouncy Feet but overall that’s missed pretty easily since the quirk deck is so large.

This is achieved doing masscrafts. If I had to put a cost on them then I guess mat cost would be close to 2000-2500 over all after gem/spark/forge mat costs. a mass forge of 9 quirky tools lets me get along really very well. The perfect tools are just so over rated if you ask me. I’ve paid for and used them a fair bit and I just dont see any real difference, not enough to justify the mat cost for the perfect rotations.

i hate the random aoe. it’s stupid. a reasonable level 5 would be3x3 @80% damage