@bucfanpaka great work as usual. Thanks a lot for the time and effort!

Hope it comes in handy for you all!

Did a few more for Boori and Xa Frant… got confused on Boori though, doubled up on names, forgot which was which… ended up scrapping some and renaming others, you’ll notice some gaps in the sequence on other planets as well.

But don’t think there are any duplicates unless you grab new ones and have some of the old ones.

General thoughts on the planets-

Biitula - Surprisingly to me, easiest going on the whole.
Boori - If you can handle the AUS connection, not acting up (sometimes trouble for me), also pretty easy going mostly.
Circ - Mix, some easy ones, some rough terrain, slightly tougher mobs of course.
Xa Frant - Roughest terrain IMO, from the areas I got. There were a couple easy ones… but also a lot of steep cliffs and other tough areas like ice. However, if you are good with your grapple, that might give you an advantage against other racers. Me, I’ll stick to the easier ones.

I did use the existing hunting platforms in a few cases, when I could reach them especially. For the most part though, either on the ground, or sometimes on natural tree platforms, on canopy or on top of a single tree, for the view.

Thought of using the forum again for announcements. Heading to Clanis in 14 mins from now. Meeting at PS Alnitans.

I think that might be enough for the permanents - I’ll see what demand looks like though, if there are a lot of people using the tokens and also a lot of hunts running, I’ll do more. But otherwise will switch focus on location saving to any new exos that might come up.

On one of my main characters, I actually saved some of my location list to tokens and deleted them to free up room for this. I figure between the special blocks, drops, and Oort (they said IIRC they’ll drop Oort now) putting focus here is worth it. I’ll still do mines and all during the event… but for taxis, might put more focus on doing Gleambow runs, advertising them as such.

Hint for any newer to this: I found Hookshot Grapples are REALLY valuable here. Just found some diamond ones, 57m range hookshots and bought them up.

(Well, there were only three but that should hold me!)

To me, definitely been worth the 100c to warp around to spots. Some other advice-

Kicking myself for not setting up a specific skill page for this sooner. HUGE difference.

Those better than me might be able to disregard this, but not messing with the “way over the horizon” ones. Still, dormants worth cleaning up!

Invest in a really good hookshot grapple! Also a forged speed/autoharvest/AoE totem if you can.

This advice courtesy of others here, but with ones you don’t want, consider waiting until the last few seconds to complete meteors with mats you’re “meh” about - and focus on the Cuttles for the sacs. However, the Oort from completing the meteor is a consideration still if you want to err on the side of caution!

If you use TNT, easy to check the citizens on each planet quickly, looking at the portals (and for Circ’s, TNT’s before you enter). Like right now, LOT more people on Boori than Xa Frant or Biitula. But then… seems to be one advantage to having lots of people around: ones in neighboring regions can spawn ones that might land right by you!

Had a good crowd show for taxi to newest exo! 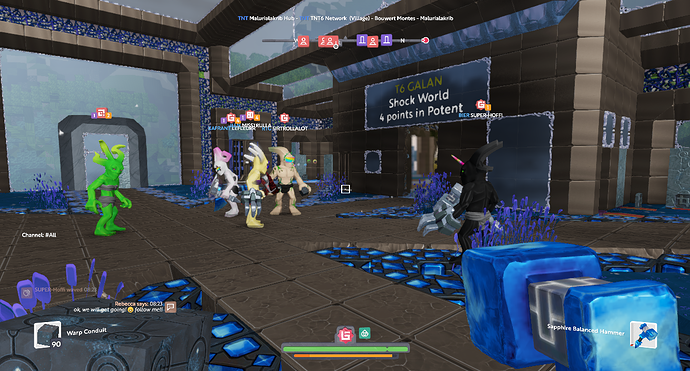 How do we find out about shuttles? I went to Firre yesterday, could have also hosted a shuttle but didn’t think about it!

What I’ve been doing with mine is posting them in the Community Chat channel.

I used to also do it on here, but figured everybody can see it if I put it there. Some who offer them plan in advance but I’ll usually just give a 10 min warning (often will wait a few minutes longer than that though as I know there is a chat delay sometimes). But, if I see anybody asking in chat and I’m available, I’ll sometimes go do one as soon as I reach a good stopping point with what I’m doing.

Illuminaughty has also started a service for them.

For anyone who may be interested - Illuminaughty (iLLn) has an “exo-info-shuttle” channel in discord now. This can be used to discuss exo locations, info, and questions, ride requests, ride offers/invites, etc. If you want to join the channel, you can join iLLn’s discord (I hope) with this link: ~ ~ ~ ~ ~ I will probably post this on each exo’s forum page (only once) for a while, just so people know about it. It’s not intended as any sort of “guild advertisement,” nor is it at all intended…

Unfortunately due to guild chat lag, the best current ways to get people for a shuttle are:

Post to forums with a time and place to meet, in advance (somewhat impractical)
Shout (in game) in populated areas

Yeah, the chat lag is exactly why I requested that we, in iLLn, start a chat channel dedicated to exo discussions and exo shuttle offers and requests.

I know it’s not the most convenient for everyone - but if you’re open to using discord you can avoid the chat delay/lag problems and also ping people directly (with something that actually notifies them. lol) or ping the whole channel - so for those who do use it, it can make offering or finding rides quite a bit simpler and less frustrating. <3

Is pii viii the newest exo?

Ow nevermind that then lol

New Blink exo up - and looking at the scanner numbers, good bit of ruby too!

On Blinks, I like to put the mines in Blink/Ruby overlap areas… will do some mines this morning, also will try to do a taxi within an hour or so here. Warp from Shedu Tier.

At TNT Serp for a few minutes, will do taxi if any who want get here quickly.

I’m at TNT Kol Huroo right now, I may have to bail but will try to wait here 5-10 min for any who want taxi!