The Idea:
So, the idea is not new but this time the aim is to make it more reliable and organized. Also, since exos are reached from different planets every time, the shuttle will always move from a known location (Exo Shuttle Station) then proceed to the closest planet to the exo. This way it’s easier to always know where to meet. Also, some sort of rule/routine can be set so people know what to expect. For example, shuttle will move within 24 hours of exo launch and will always be announced 2-3 hours before moving (just like hunts). This way, some reliability can be expected. A better routine can be set after trying the station for some time to know how things go.

Implementation:
A group of shuttle operators are to help run this service. No pressure but if you’re online and you can do it, go ahead :D. This is made for the fun of it and should remain fun for everyone.

Funding:
Ill start by putting some funds there for the first 10 trips or so (with warp augments/conduits/etc). If the project succeeds, other funding ways can be explored (such as footfall by cooperating with hunt masters to help by passing quickly by the shuttle station for easy footfall on their way to their hunts). Can be discussed in future if this succeeds.

Shuttle captains:
Drum Roll
Observing the forums (and who goes to exos), i think @bucfanpaka, @majorvex, @gorillastomp, and @dkpuncherello might be interested in helping with this? If this fails, blame them. Just kidding xD. I am hoping to get the aforementioned members help (if they’re interested) since I am not always online (or free) when the exos launch. No pressure again though. (If interested, details will be discussed privately as to give permissions to station and storages and what not). Know someone else who is trusted in the community and who may be interested in doing this? Mention them

Location of station:
Right next to the Hunt Hive. Hunt Hive can be reached from PS Biitula Hub > Iconicsberg City > (Portal to your right) Hunt Hive. 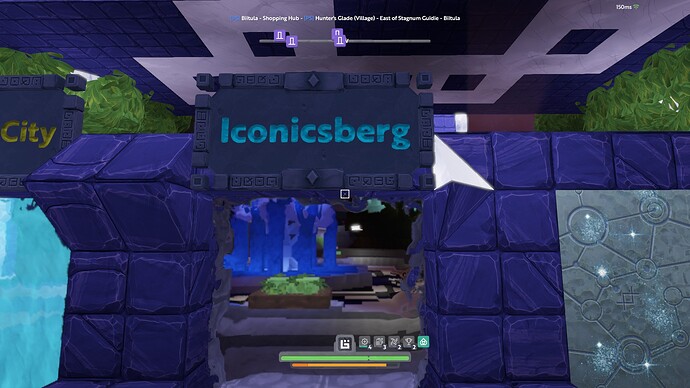 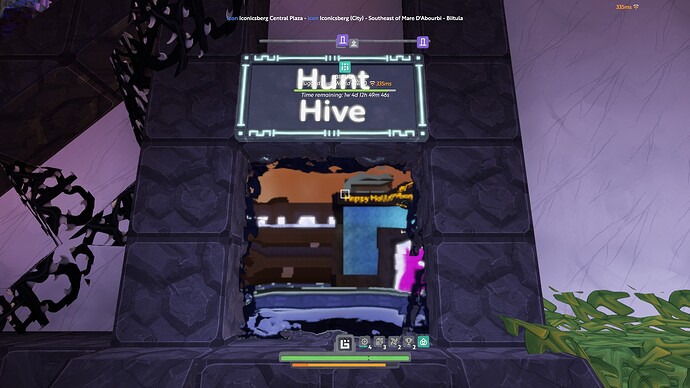 Little storage areas for each operator so they keep exo gear (if they wish) so they can quickly hop on to the exo. 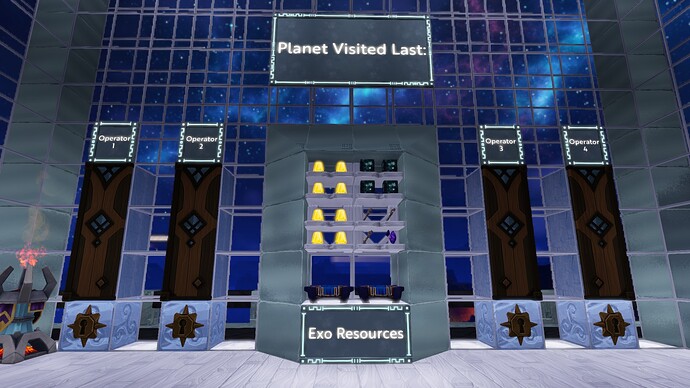 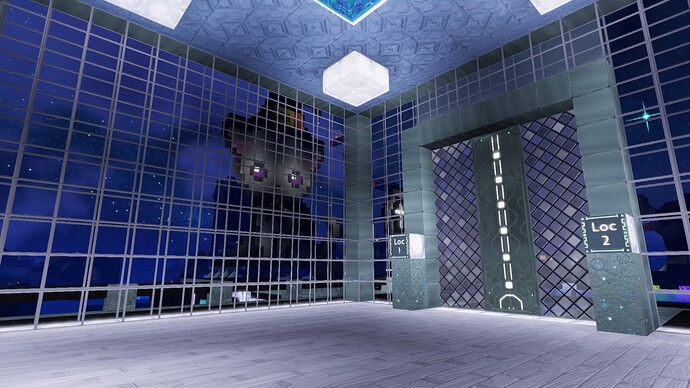 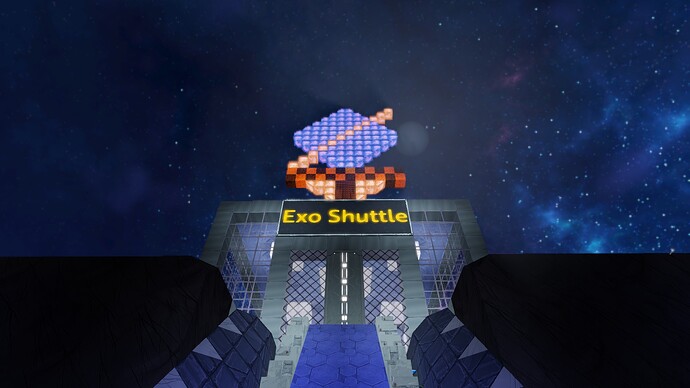 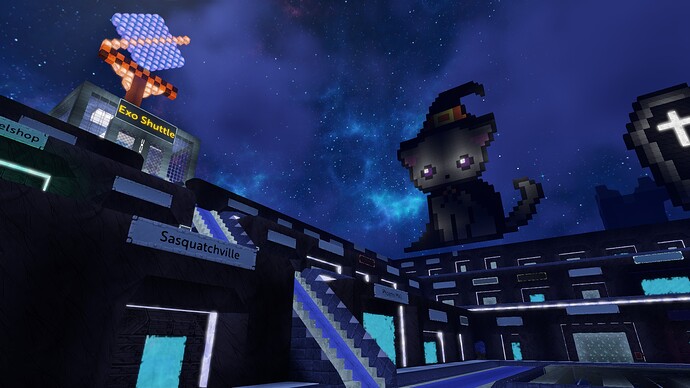 Other ideas:
If others are interested in launching their own trips to the exos every now and then, I think the station can be used as a starting point, so everyone becomes familiar with this station as a meeting point? Got any feedback or ideas that I might’ve missed? Share them with us here!

Last but not least, a huuuuuge thanks to the awesome @orrian for helping with giving me this great spot next to the Hunt Hive and helping in building it.

If others are game, I’m happy to help, and I’ll use all my own stuff when I do, the others can use the supplies!

My big, big issue here is advance commitment - in general on weekdays, my gaming window is about 5:30-9:00 pm EST or so, maybe an hour around 6:00 am sometimes, and on weekends often a lot more and at various times. But because of family stuff now, just can’t commit solidly to doing anything in a game until right before I’m ready (which is why I’ve been posting my taxi notices when I’m actually at the portal buildings, in some of these threads). Even then, I might be called away and have to immediately drop everything with no guarantee of time of return. I just have to put this out there since if I offer, just know there is a chance you could be “stood up” - sorry.

I’m not familiar with that location, so I’ll go check it out a little later and see what the best routes from there to the higher tier worlds are.

It is a good thing if we can get more folks to the exos, I know the coin is an issue for some, and if going anyways - which I often do - nice to share!

Anytime my friend. I do hope this can help everyone and I do like seeing new community things going on. I nominate @Taleyah for captain if you ever need one. Shhh she is filling most of the goods in the “Exo Xpo”.

@RedY3 To infinity and beyond!

Other ways to get to the Exo Shuttle at the Hunt Hive. Gyosha Mall, Hunter’s Courtyard, TNT, blah blah blah hate typing this list over and over.

This is a great idea!

Guess that’s the exact same thing there’s been at TNT for a little week or two now; Though getting someone to use it? Well everyone just uses their hunt areas instead, so the point is a little moot.

Even for listing hunt times, Hunt groups don’t seem to want to do even that.

Has anyone tried using a guild for this? Taxi operators and customers could use guild posting in-game; could put up a guild boom with autojoin

I’d need more info, but I don’t mind taxing people over to an Exo

The days/times I can be in-game are really random. Sometimes I’m in-game at 2am CDT, sometimes it’s 10am on a tuesday lol

I do not understand the concept here, Is it a place to meet up then go to the exos or giving tool to new exoplorers ?

Yeah, we’ve got both a guild for Exo hunts, and a guild for regular hunts at TNT. Though, we haven’t set up ready-stations like that, at least not yet.

Meet up to give free rides to exos

I think a taxi guild would be a convenient way to run something like this indeed; this way you could have a formal, announced taxi to new exos but also “ride share” announcements on the guild chanel when able oorts are going thru so newbs/non-warpers can join.

Passengers can just split the warp cost; i’d probably pay full fare just for the convenience of having those skill points free on my explorer.

Although one could join an exo hunt, I’m sure people go and want to go more often than hunts are announced

Though, we haven’t set up ready-stations like that, at least not yet.

Once upon a time there were Nova Golda Farm Hubs right at every TNT portal gate which had (or should have had in near future) exo spotting platforms which would have been perfect for this too.

Shame something fell through tho otherwise these would have been open still (and all exo platforms finished), ah well…

And here i was thinking of a way to notify everyone at once but many people dont use Discord or the forums (especially new players). Somehow i missed the guild idea. Thank you, ill add a guild book!

Commitment isn’t an issue and no one (of the shuttle leaders) is forced to do anything. If youre online and free when an exo launches, announce the trip and lead people to the exo - that’s it. If we have like 4-6 leaders, this would increase the chances that 1 or more of them are online a few hours after an exo shows up (so people are well aware of the exo by that time). I don’t have a list but thats a nice idea. I once forgot my liquid breaker. Ill add it thanks!

We could spread these guild books all around major hubs and malls pretty easily. I have no idea how factions works though.

Managed to lasso three others for a field trip to Char today! The color scheme is depression. Lol

No need splitting fare costs. It is affordable enough for the big players. True hunt times maybe inconvenient for many players or not frequent enough. As DK suggested, I am setting a guild book.

I am totally blank when it comes to guilds.

Updated! Thanks for the suggestions. Anyone is free to join the guild and tell others about it. Willing to hear feedback about whether it works or not. When enough people join it, we can start making announcements and seeing if they reach the players easily. 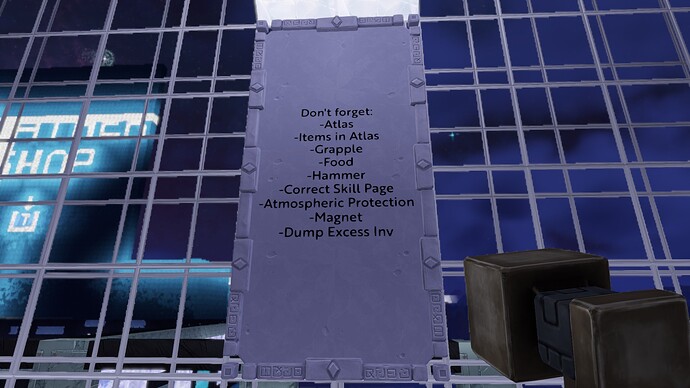 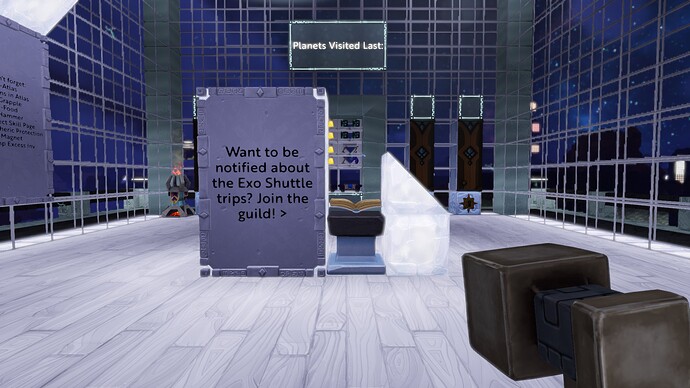