Hey guys i just reached lvl 50 with my main i was farming the peanut gleam ball for xp and money now im looking for a more efficient way to farm money since i want to provide my portal with oort shard , any suggestion on best eay to make profits ? Spots to farm , specific mineral or something ? Or is it more easy and fast to farm oort and transform it please give me some advice <3 ( we opened a portal from tnt to our sov ) its called Herbalia

come to the raxxian sanctuary on raxxa, and ill guide you how to become a millionaire in a few days

For mining, excluding the T7 (special exo) stuff, the most profitable I’ve found is T6 amethyst mining on Corrosive worlds. You get a lot of ore and fossils besides the gems. Can sell the fossils, or extract ancient essence and make a good bit off it by putting it in a fully coiled Chrysominter.

Going on big hunts is a good way to get Oort, and not hard.

Beans always sell, since not too many seem to want to collect them. Farming the trumpet roots and mushrooms on the tops of Island Tree biomes on high tier worlds can be pretty profitable, and also, for Bitter Beans, I set up some portals to glacier areas at Paka’s Palace for easy collecting. This isn’t huge money or very fast, but steady.

Solo hunting roadrunners and hoppers on the high tier hunting grounds I set up gives great profit per slingbow. Mining amethyst is faster coin, but if tight on coin or wanting to mix things up, can do good selling the drops and you’ll get some Oort.

For exos, the goo sells pretty well, if you get an exo loaded with it. The T7 lucent gems sell great, but the counts on recent ones haven’t been too good.

Craft or buy a Chrysominter, mine rocks fast with an AOE hammer, than build stone doors and sell them in the Chrysominter. That can be another way as well

Sell them in the chrysominter ? You can sell stuff in that machine ?

This tool can make you rich in several ways, if it still works

https://butt.boundless.mayumi.fi/ but everything they tell you here works

Sell them in the chrysominter ? You can sell stuff in that machine ?

u actually ‘‘mint’’ them see it as an automated buying NPC lol each item has a mint price labeled on it. 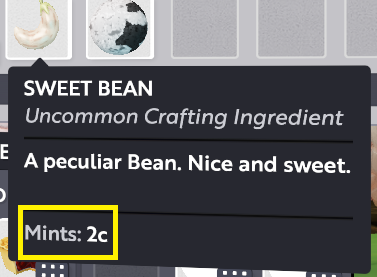 of course this is an example, once does not sell beans to a minter…that be silly

Ohh wow thanks ill try to setup on tonight at my place i guess it need to be spark powered ? I havent done my generator system yet

it requires no spark, but does require power, a total of 800 power is the maximum a fully coiled chrysominter gives a 40c coin bonus!

Im down if you are on tonight lets do this

whenever you’re on just let me know

come to the raxxian sanctuary on raxxa, and ill guide you how to become a millionaire in a few days

Be careful of his snake oil! If he asks you to sign on the dotted line in blood don’t fall for it… otherwise he is an angel!

would be nice to have some of them coils but unfortunately got no money to buy them and they are quite expensive for me.
https://butt.boundless.mayumi.fi/#item=MACHINE_ENGINE_COIN_MACHINE

But still, even without coils @JeJaYa, when you have stuff like leftovers that you don’t need or can’t sell to anyone, you can mint them for both cleanup and also making a little pocket money.

Btw there is a fully coiled public minter at Pharaos Kingdom, you can look up @Turrican2006 videos

Understood, cool, will check it out.