HELP! Give us your opinion on the balance of beacon compactness?

It seems the live universe suggests that some iteration could be useful. Are we certain that neighboring plots with high compactness are accurately reflecting to less compact ones? the gyosha mall layout for instance feels like it is rated more poorly than I would expect.

I really like the map tool! if it were possible to get it to auto update every couple of weeks/once a month that would be awesome. I like being able to scroll around the planets, which the only other site that has them listed is not quite as user friendly as the one @james has put up. I realize this was for transparency of the new system and solicitation of feedback, but I really like this tool of checking up on the area around where I have builds.

not saying anymore it would be detrimental

Yeah I had this idea too, supposedly James will fly out of the sky and delete them if we do this

Could I be able then, to place 100 different beacons in a line, make each 1x3 plots, and keep an acceptable compactness score?

I believe James said this was specifically not allowed and would be considered abuse.

Every game I have ever played has something like this in the TOS.

We reserve the right to delete any in game content without notice.

Im willing to remove my plots if I am reimbursed for the cost I paid to buy them. Otherwise if my plots get removed its breach of contract. Its legal its binding. 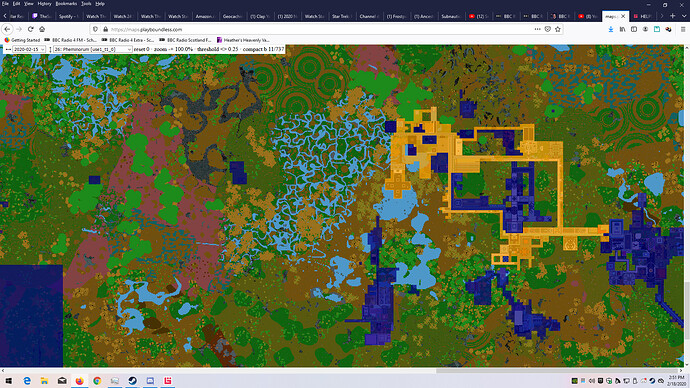 So the large yellow bit is my half of the City of Star Nation on Phem. As mentioned in many other comments, I plotted for many reasons that had nothing to do with plot hording… almost all of that is a single beacon (my home beacon), plotted to make footfall and fuel convenient and avoid having to fuel 100 beacons every couple of months (not gleam club). My friend and I began by making a single road between our two towns (his is the blue half), with a mini-mall in the middle, to connect up and become one large place. We added another road behind the mall to encourage growth in that direction, and plans are afoot for a third (top of plots). There are a few bits that are alt-builds, more that belong to other people who have joined our city and done builds of their own… end of the day the plot layout was determined more by just general flow and the landscape than anything else.

1 - everything is fine, the devs solution determines the beacon is not offending to cheat and reserve area. Best case scenario, but that is a lot of yellow for hope, and no offense to the Devs but I’ve seen too many “solutions to problems” only create more problems to feel confident.

2 - easy fix. I can see, I think, where the problems are coming from and it’s the three roads. Perhaps if my friend and I removed/remade the roads into a single, wider one the problem would fix itself? Not ideal, as it’s a ton of replotting and rebuilding, but it’s better than the other options.

3 - difficult fix, maybe even impossible because the place is so immense now. That means either tearing the entire city down and moving it, which hurts every other person with a build there unless they want to get dragged into a move too, leaving it as is which hurts me to no end because I cant take a penalty and if I could fix it and stay put it would be option 2 already, or just tearing it all down and instead of moving say to hell with the game and not play anymore.

As it seems that I need to make a decision fairly soon, I would appreciate any thoughts and suggestions from the devs or anyone who can look at that map and identify the problems with it and possible fixes, or likely outcomes of how this update will affect my place. Thanks in advance.

What do you guys say we just delete Biitula to make room for more exos.
Jkjk

Delete Biitula and replace it with an Aussie T4

I’m not deleting anything, nor changing anything im that guy that has a huge plot set under a few beacons across the entire planet so the roads are needed but its kinda making my entire place useless? xD but i don’t care i stil wil have fun and work on the roads

hmm, yeah your cities there seem to be some kind of edge case too. It kinda looks like perhaps just a few extra plots to fill in a couple gaps in the center might just turn it more blue? but then again it kinda looks like the compactness of other nearby beacons are not imposing their full values on the less compact ones.

I wouldn’t do anything too rash yet, the system is still being developed and your case could be fixed in a new pass over of the values. The feedback that you think the plotting case you highlight should not be punished (which I personally agree with) is what I think they are more or less fishing for.

The way I see it, Star Nation is a dead, better to just move. If we move stuff around there the possibility that it’s will still cause companess, our reservation ratio to the plots it’s to high, also I was looking at the phem map and I noticed that most of the beacons that could be. Affected have some sort of large.

I would hope that only one of the red areas is the real problem. 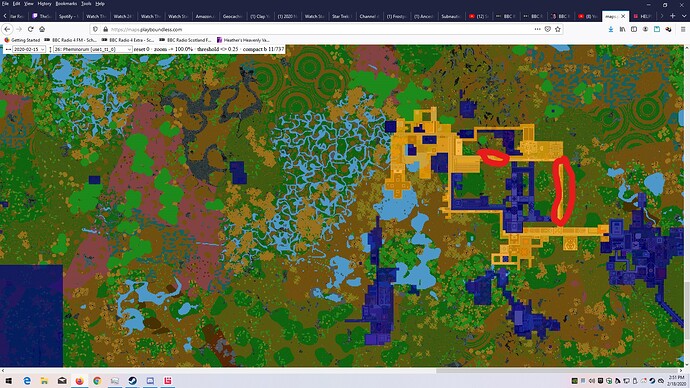 Hopefully if you can address those areas it will work out. We do need to understand how adjoining beacons belonging to someone else affects compactness.

if a “road” can be 16 long with no beacons next you, it could get to 32 long say [not tested] if one side is all filled in with neighbouring beacons or “infinitely long” if filled in on both sides (fully contained by neighbours).

Star Nation is a dead

Keep in mind there will be changes to the algorithm. I think most people agree roads like yours are “fair use” and I expect that they, along with other city road networks, will be deemed ok in the end.

I don’t always like everything James does. But I mostly trust him.

I think that these maps show that a beacon splitting tool is necessary before compactness takes effect, if we are to have any hope of becoming compliant.

I think that these maps show that a beacon splitting tool is necessary before compactness takes effect, if we are to have any hope of becoming compliant.

I am not sure how beacon splitting will help

Circumventing the system by using an extensive collection of smaller beacons is not allowed and also banned.

Since using multiple beacons is also an issue

I feel this really needs to consider vertical beacon placement as well then, that with a lower general compact rating, perhaps around 0.15 seems to still allow some roads as long as they are not extream

Maybe we need more people to join and help fill in our community’s gaps. Lots of roads and nobody living on them.

Could I be able then, to place 100 different beacons in a line, make each 1x3 plots, and keep an acceptable compactness score?

It’s already stated that this is forbidden behavior.