Hold on. To your butts.

I’ve been working on a concept for weapons crafting, related to my thread about world-specific materials…and at a certain point, I had a little flash of inspiration.

We’ve seen the magic-gems-that-fit-into-slots model many times before - Final Fantasy VII, Infinity Blade, and Child of Light to name a few.

So here’s what I’m thinking.

Different types of magic, each corresponding to a different type of shard that can be incorporated when crafting weapons/armor/items for discoverable effects. 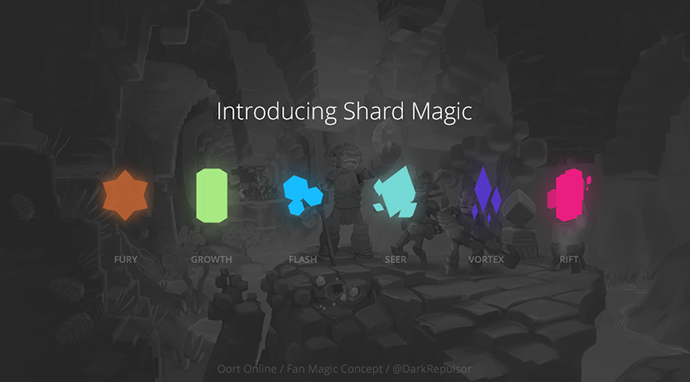 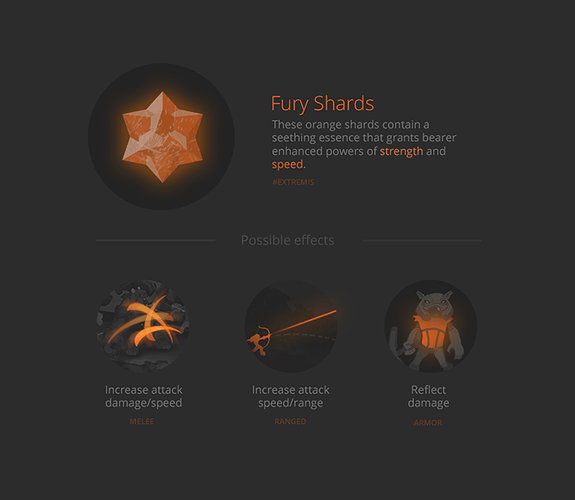 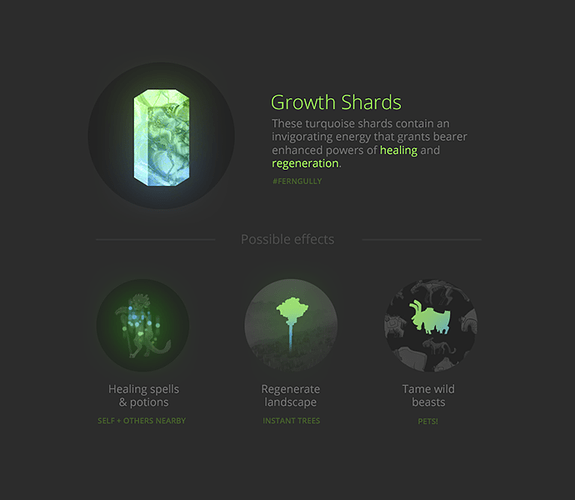 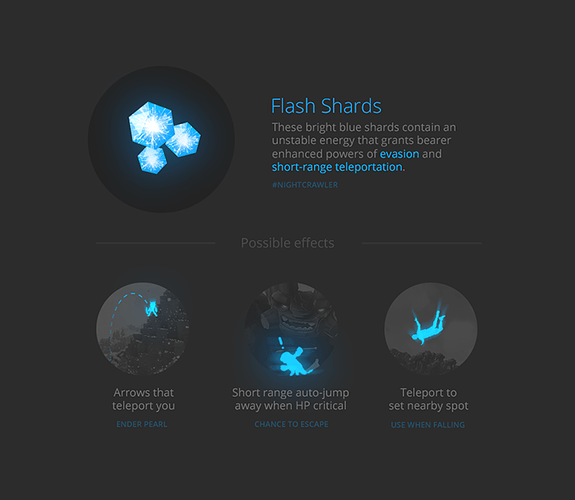 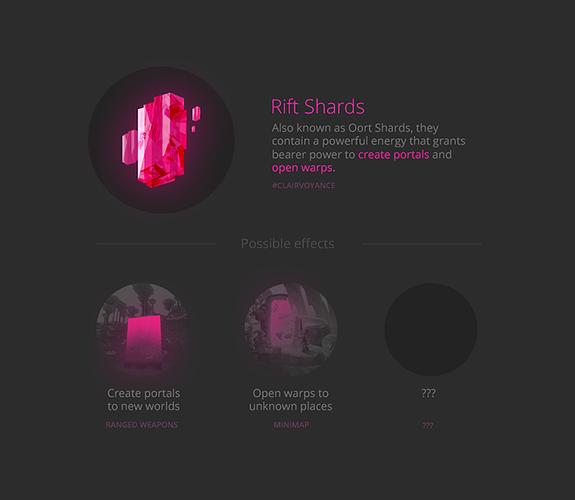 Edit: a few ideas I failed to mention:

• Shards come in different sizes – bigger shard, bigger effect. Some are tiny.
• Some shard types are rarer than others.

The concept and the graphics are well done!

…Of cause the effects are each only examples, but the idea how the can be used on items is cool. I think each Gem should have effects on all kinds of items (Melee/Ranged/Tool/Armor/Sight-item), but that’s something which comes when the thoughts are going deeper.

This is neat! Also the presentation of your concept just ROCKS, man! Good job!

What I propose is:
• Keep the Shard types, cause they are neat. Great job here, really.
• Bring all Shard types to the same level. This means buffing some of them and hitting others with a nerf bat, obviosly.
• I suggest bringing up a number of set number of activities, and how these Shards affect them. All Shards should have different effects on each activity. They could be, say, Offensive and Defensive (possibly can be just one category - Battle), Exploration, Miscellanious. This would help bringing all Shard types in line with each other.

What do you think?

If you combine this with the lore of magic and technology post I made a while ago, it’d be a perfect system. Well done!

YAS YAS YAS! I bet the devs could just use your magic presentation as is! It’s so professionally made! Great job!!

I do feel like the lack of building magic is bursting my bubble though. 1 more type for building though? It could be a “white” magic kinda deal to balance out the dark magic. I suppose different abilities in each of the categories would be useful for building though…
I love that it steps away from the classic elemental magics, while still being somewhat familiar. The ideas for each category are great! I wouldn’t even complain if this was the system that actually got implemented as is!

@TheBirne Yes, completely agree. Lots of potential for application, my lame examples are just to get the thoughts going!

@Lilem Awesome, great thoughts. You are absolutely right, there’s a lot of balancing that has to happen here. Some initial attempts at improvement:

Flash shards allow you to teleport, but only at a very short range, and with a loooong cooldown.
Seer shards might be more useful than you think, especially if you’re going for stealth. The early-warning perk would, in theory, save you from snipers and from people sneaking up on you.

I love the idea of doing a simple matrix of Offensive, Defensive, Exploration, Misc. Definitely going to start thinking about that.

Edit: Oh, and I added Beast Taming to Growth Magic.

Initially I thought the seer shards would be my first choice. zooming and warning would be great for builders and snipers.
On another note, would players have to pick one type of magic and stick with it, or could we interchange the different shard types… maybe Building them into tools, weapons etc. ?

Yet another question, What program did you use to create this awesome visual?

The question @Squaremunch asked is one that I have myself.

would players have to pick one type of magic and stick with it, or could we interchange the different shard types… maybe Building them into tools, weapons etc. ?

Exactly this. I used Final Fantasy 7, Infinity Blade, and Child of Light as examples of this kind of mechanic.

@Squaremunch Photoshop, Illustrator, and a day or two of sketching and planning.

This is coming out neat!

This is a very nice concept!
Great presentation, too

personally im split, i think that the idea is amazing but it also have some things that bothers me.

i think you should pick that either no skills or every skill is bound to a gem, if they should make this every skill should be bound to a gem, not just magic but also physical skills such as a greatswords cleave and an archers multishot, if not then i think every mage character would be somewhat forced to also use a physical weapon or they would be inferior to a warrior using teleport though.

remember all of this is personal opinion

assuming that this is the case i think more of this as a path of exile system, every skill was bound to gems which you could equip and level, with certain requirements (such as a specific amount of dexterity or intellect)

the biggest difference being that these gems were skill specific. so a ‘‘Cleave skill gem’’ ‘‘Leap skillgem’’

this being my biggest problem with the idea of the spell depends on where you equip, i love the fact that the different magic types are so different and i think that should be kept, but i think they should be specific skills that would stay the same no matter which piece you put it in to allow for more skillbuild freedom.

example instead of having a seer shard you would have

Allows the weared to detect nearby hostiles

Gives the wearer an aleart whenever an attack is incoming

this would allow for greater freedom in builds, but also allow a sort of scaling through levels so some gems might only be equipable in tier 2/3/4 armor etc…

then just have 1 available gem slot for each equipment piece and i think rather than crafting in it should be physical shards you can equip and unequip at any time, (in case you want to change builds for a boss or the likes)

again if you also combined skills to this which focused on different stats (Rage shard for strength, Nimble shards for agility… etc…) and then weapon skills it would be an epic system for oort.

ps i love the drawings mate

The one shard that really terrifies me is the flash shard. If a warrior-type class can have the ability to teleport towards a mage, then all ranged characters would be screwed over. Assuming that ranged classes die quickly to melee classes.

I think having shards give a different ability to different classes would balance that out. So instead of giving teleportation abilities to melee classes, they can have leap and dash abilities instead. That way we can still see them charging at us, giving ranged characters the chance to shoot them down.

The one shard that really terrifies me is the flash shard. If a warrior-type class can have the ability to teleport towards a mage, then all ranged characters would be screwed over.

I think the game is supposed to be [Or imo should be] balanced that it’s not so much class based, but more so skill based. Like in Skyrim, you choose what portions of yourself you level up and it actively levels multiple traits. I would hate to have to choose Warrior, archer, scholar, or mage in the beginning and be stuck with that…

I pretty much guessed that it would be class based. I played a lot of mmos that let you choose a class(aion,tera,perfect world, etc.) rather than being able to change your combat style like runescape(I never played skyrim

i think they are trying to stay away from locked classes, but rather you are what you use. kinda.

The devs im pretty sure they stated they are against the standard magic with the whole skills system but instead are looking at things like this as a form of Oort technology,

they are against the typical magic types (ice, earth, fire) yes, its written in my post about possible magic types, they never said anything about the skill system, just the elements.

How do skills, classes, and leveling work into this idea?

No idea. Some thoughts:

Final Fantasy VII - gain EXP by winning battles, Level Up to automatically increase base stats. Attach materia (magic gems that you find or buy) to equipment to unlock skills, abilities, and spells (the gems also level up - Lightning 2 is unlocked by leveling your Lightning gem).

Infinity Blade series - gain EXP by winning battles, leveling up gives you a small number of Points that you choose how to dump into base stats. Attach magic gems (found or bought) to weapons/armor to buff stats and unlock skills, abilities and spells.

Child of Light - gain EXP by winning battles, leveling up gives you one Point that lets you choose to unlock something - skills, abilities, spells, but also stat boosts. Attach gems to weapons/armor to buff stats and add elemental effects. 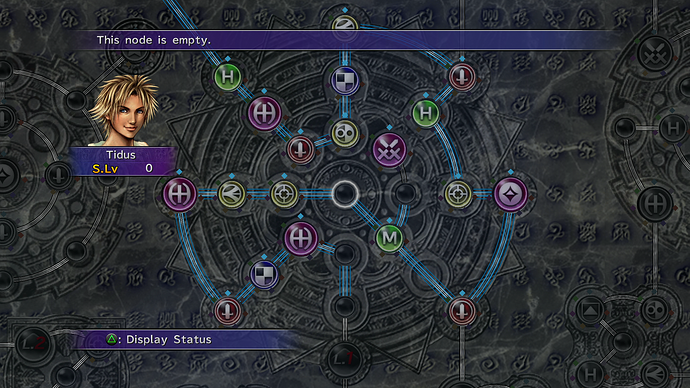 ffx-sphere-grid-guide-hd-max-stats.png1920×1080 2.57 MB
In FFX, leveling up earned you "sphere points," which you could spend on the "sphere grid." The grid was a [massive board of stat boosts, skills, abilities, and spells][4]. @Nyuudles Skyrim's "[perk" system][5] is very similar, but organized differently.

The Sphere Grid was daunting at first, but in a longform single-player RPG context, you had plenty of time to learn it - and once you did, it was crazy fun. It’s probably way too complicated for something like Oort, but I do wonder if there’s something about a point system that could be successful.

Edit: so, back to the Shard Magic system...

**I think you could have both**. A shard system for augmenting weapons, and a point system for leveling your character.
next page →