Is there a Development Roadmap

Is there a roadmap for the future updates?
If not, can we have one from the dev?
I’d like to know what they are planning for future

Don’t see that happening any time soon. James has said that previous ones have just caused issues. If something doesn’t work out, gets delayed or a new more pressing project comes up people basically whinge like hell as though the road map was a promise.

For a second, when I clicked on this thread, I was like “O M G they finally did one?!” before realizing that if they had, it would’ve been in the news-announcement section.

But they should have something that is almost certain or a something that could motivate the player base to go forward.
Usually, and i’m not saying that this is the case, no roadmap means no active development.

Usually, and i’m not saying that this is the case, no roadmap means no active development.

Why would you say that? Most games I’ve played didn’t have a roadmap.

Probably you are right but for me is the opposite, lot of games have a post launch roadmap to motivate players and to show where the game is going

Not used to seeing roadmaps that often either. They did used to do them fairly frequently but I think they stopped to prevent community rants about things that haven’t happened yet. Guess they figured we whinge less when we hear nothing than we do when things are announced as in development and not completed in a month or two.

The lack of news used to REALLY annoy me too, but tbh I just accepted they weren’t going to change and started just playing the game that we have now not wait for what might happen

I’m okay without a roadmap.

make it rain with updates instead

Usually, and i’m not saying that this is the case, no roadmap means no active development.

I work in product management and while I can’t speak for video games in particular, I can say that it’s VERY normal for companies/product management teams to not want to publish any kind of roadmap for the exact reasons listed thus far. Unfortunately, customers do hold companies to their roadmaps and this can result in a worse relationship with the customer than if they had said nothing or been really vague. Not saying it’s a great strategy, but it’s common.

Having been on the other side, I know that silence on upcoming development doesn’t in any way indicate that no development is happening.

What I would do to see this roadmap <3

Welcome to the forum @DarkSkies and good points. I too would like a roadmap.

James has said that previous ones have just caused issues.

no roadmap means no active development

There is definitely active development in this game. For example, testing for new creative/rental planets has been on-going.

They have posted roadmaps before. They usually end up adding a lot more content, QoL updates, etc than was mentioned.

Some things get moved around for various reasons & some people don’t take it so well. Sometimes things need to be pushed back, removed, pushed ahead of other things, sit in testing longer than other things, maybe they came up with a feature that will be better or replace one from the original roadmap, etc. 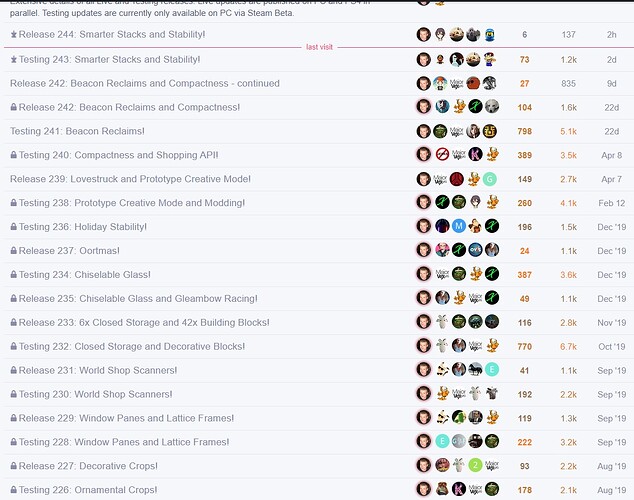 I used to really like having the updates, but now I’m glad we don’t have a solid road map. I’d say roadmaps can work well, but it depends on the game and (probably more so) the community that consumes them.

With a game like Factorio (where they get frequent smaller dev updates), the game is very defined and most of the items on a roadmap take it in a largely singular direction. The community there is also more receptive to things not happening when provided solid reasoning.

With Boundless, there’s just too much scope for people to be unhappy. It’s trying to be a lot of different things to a lot of different people (and some of those people have directly conflicting opinions on what is good) so almost anything on a roadmap causes drama. That, and because it’s so open ended and full of potential that this community spends a lot of time hyping what it could be and getting disappointed when it doesn’t meet that (I’ve been that person too). Even logical reasoning frequently falls on deaf ears.

TLDR; I’m sad that it’s come to this, but I’m glad that we don’t get roadmaps any more.

This is only a personal opinion but I’d rather see a roadmap filled with things I don’t care about than nothing. At least then I could have closure and stop checking the forums so often and just move on to a different game.

The community there is also more receptive to things not happening when provided solid reasoning.

I think making a comparison like this is difficult because as far as I can tell we’ve had very few occurrences of being told things aren’t happening.

There is definitely active development in this game. For example, testing for new creative/rental planets has been on-going.

Perfect and I can live with no roadmap but i’d like to know if new things will be added in the near future.

This is only a personal opinion but I’d rather see a roadmap filled with things I don’t care about than nothing. At least then I could have closure and stop checking the forums so often and just move on to a different game.

I agree with Clexarews mainly becouse i think this game has a lot of potential, it could be the main minecraft competitor in my mind.

This is only a personal opinion but I’d rather see a roadmap filled with things I don’t care about than nothing. At least then I could have closure and stop checking the forums so often and just move on to a different game

I just want to say this, is exactly what I have been wanting too. I want to know if the devs plan on adding stuff to the game that I’m looking forward to, or if I should just move on to higher ground(s)? The problem we have here though, from what I have seen,

With Boundless, there’s just too much scope for people to be unhappy. It’s trying to be a lot of different things to a lot of different people (and some of those people have directly conflicting opinions on what is good) so almost anything on a roadmap causes drama.

This, is so true as well. I see the game trying to cater to many, many different types of people, and because of this so many functions and features in the game just feel like they’re incomplete and not fully fleshed out.

Take spray painting for example. There’s only a small subset of natural blocks that can be affected by spray paints. I’ve brought up my disappointment with the system with James, and he’s mentioned to me that he wants to flesh out the system and allow it on a wider variety of blocks. While nice as it is that he’s told me this, the lack of any additional follow-up on this topic starts leading me to believe that such fleshing out has either taken a backseat for other features that have yet to be announced/released or the plans have changed, and they no longer wish to flesh it out more like I was originally told. This lack of communication is what’s bothering me at this time. Am I going to eventually be able to recolor what I want to recolor using the spray paint system while all of the other special snowflakes in this game gets to keep their color exclusivity black gleam to stupid time-limited highly competitive, high adrenaline events I cannot partake in due to my lack of good hand-eye coordination and skills to reach gleambows? We’ve had Exoworlds in the game for 13 months now, and the same general color schemes continue to rotate in and out. I thought Exoworlds were supposed to have a chance at ALL colors on ALL blocks, and not just a handpicked set of “palletes” which doesn’t include the block I want to see show up, (Yes, black gleam.) … So in all honesty, it all boils down to what I want to build being possible or not, and if I am going to have to continue waiting for years possibly (Its already been 13 months) for what I want to finally show its face in the Known Worlds, to know whether or not it can and WILL happen, or if it is NEVER going to happen because of the aforementioned snowflakes. All I want is a large supply (about 25~30 smart stacks) of plain black glass for all of my building needs, but because the current recipe doesn’t make any logical sense (A light-emitting block determining the color of a translucent non-light-emitting block) to me, … I’m at a loss here. So the reason I want more communication, a roadmap, is because I want to know if I too should stick around, or if I should just pack my bags and go someplace else. I’m tired of sitting here in the unknown. I want to know whats going on. What are the devs up to?!?!?

Basically, we don’t have a roadmap because the devs have failed to properly execute one in the past.

Are the pictures they were still doing in early 2019 counting as roadmaps?! Excuse me but these were only roadmaps in name. They were just pictures with 0 interaction. That doesn’t count.

If properly done, it would always be better than not having one.

Honestly, from the heart, I’ll say it, it’s unacceptable that Boundless is still so unfinished.
The devs have promised faaaaaar too many things they haven’t delivered.
I think it’s borderline malpractice to have a trailer (published in 2015) where you see a prototype of a Titan and the actual feature is still not there in the actual game in 2020!

Boundless is a game that puts a heavy importance on building (with all the prestige and stuff), and we still have one wooden chair and one wooden table.

There are some really bad players in the game who abuse the systems in place, so the devs spend litteral months making more systems to take care of them, whereas they should have a dedicated team of community managers to handle the reports in a case-by-case manner.
Spoiler-alert, these bad players barely got a slap on the wrist and are still there today, and other players have to hang around them pretending they’re not there.

“Oh but the devs are just not enough”
Well then recruit more people. Solved.

“Yeah but they don’t have enough money to pay for more people”
Well then add some non-intrusive micro-transactions into the game. Solved.
Yeah, some people are gonna complain, but you gotta decide what you want at some point.

I would rather not still be here in 2025 (heck, not even in 2021) waiting for Titans, Furniture, Rental Worlds, etc. Some of that stuff was promised in 2014!
No game should be in development for so long.