First of all, I have to say a massive thank you and well done to the awesome work the developers and the community have been building here together. I backed this game about a year ago when the game still had no sound in it

This is truely becoming what I once backed for and it is great to see this unfolding to us. However, after playing for 3 days, I feel like I have some suggestions to tweak some of the existing features. I know nothing is final yet, but I might have some ideas that might help.

I hope this was helpful to the devs and I would absolutely love to hear any suggestions or maybe why my idea can be bad or how it can be better. Thanks to this awesome community, so stay awesome guys

I know many voxel games have the same problem of creating coal, iron and silver blocks as the color are very similar. I have an idea that can help people distinguish them from afar. Keep the silver as it is right now, if possible lighten the darkness of the iron block and if possible change the texture a little bit, for the coal we can just make it pitch matte black. This will help realise them from far.

i agree with the coal and iron, its sometimes hard to tell which one is what from far distance.

Weapons. I know we have a slingshot, but i would rather have a sword that can be built early game, tools almost deal no damage to those spitters without the slingshot I feel vunreable near one. I think having a real melee weapon or atleast adding melee capabilities to axes and hammers would be a nice addon, especially for lower level people still starting in a world.

Fossils…okay I personally have an issue with this, and I am sure more people do. Fossils are tricky to find, and they are required for iron and copper tools which is too much in my opinion. For a time I had 200+ of iron and copper and couldn’t make any tools because I couldn’t find any fossils anywhere. I think fossil implementation for tools should be added maybe starting the silver tools, or maybe the platinum tools. They should feel valuable, even if you will decrease their spawn rate, but atleast keep the first few alloys free of fossils when creating tools.

@alexanderyou, @PharaohNai: I find fossils fairly easily in the upper levels of caves. Not deep by lava, but kind of right below the surface (about where you’d expect to find them).

I agree that coal could last a bit longer but it is soft coal and in low level crucibles. I imagine there’s already a plan for progression with this.

I heartily agree about increasing the rate of gold and other rare materials. Even if it’s just a 100% increase from like 0.00005 to 0.00010 or something (numbers are arbitrary, not a reflection of the rate in-game). Especially since they’re required materials for warping.

I heartily agree about increasing the rate of gold and other rare materials. Even if it’s just a 100% increase from like 0.00005 to 0.00010 or something (numbers are arbitrary, not a reflection of the rate in-game). Especially since they’re required materials for warping.

I think you want to be careful about adjusting gold. It’s already not too hard to find (dig in the desert mountains near silver) and will probably be less rare on non-starter planets. It’s only been a couple of days and I’ve found enough gold to warp already. I just need to find the tech components for a power core

I’m immensely jealous. I’ve been spending all of my time in game digging in the mountains looking for it. Haven’t found 1 so far, let alone 5.

Can you post a screenshot of what it looks like once you find some more? I’m guessing it looks like copper but copper already changes colors so much it’s hard for me to not get excited when I find a goldeny colored copper.

Edit: I have 1 component and I’m happy to give it to you if you let me tag along on your warp

It actually looks closer to silver. I don’t have a screenshot at the moment but if I find more I will take one. I will say that you really have to dig for a while and be persistent. I usually dig a 2x2 tunnel and mine out any and all resources that I find along the way. Gold is usually tucked behind medium coal or silver veins.

I’d be willing to toss some coin your way and let you tag along for the warp for the tech component.

hahahaa 20 fossils mean nothing when your tools keep breaking

I am on the EU server

its in the desert you say? And how deep you usually dig?

Yes. You don’t really have to dig down but you have to dig around in the sides of the mountains quite a bit.

For anyone who is wondering. Here is what silver looks like. Gold is pretty much the same but gold instead of silver XD 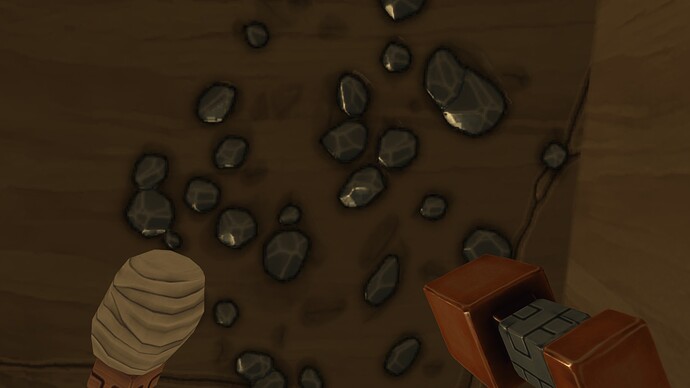 I came across a vein of almost 15 silvers an hour ago, all under my mountain base after i broke a stone by mistake, I was like

I have enough silver that I can afford to start making silver alloy tools. Might as well, I’m swimming in fossil and iron, too.

its actually more effective to use stone tools to gather resources and use copper/iron only to get rare materials like gold and silver, grappling hook and chisel last long enough and you can do only copper ones so only 1 fossil needed for every tool.

Found about 2*12 gold in two spots, less then 10 blocks from each other.
But still missing the second component. 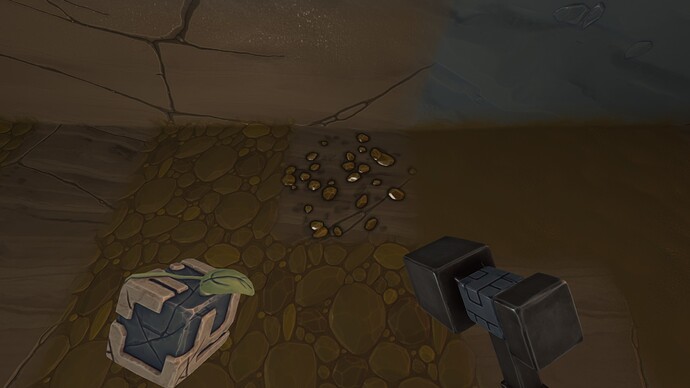