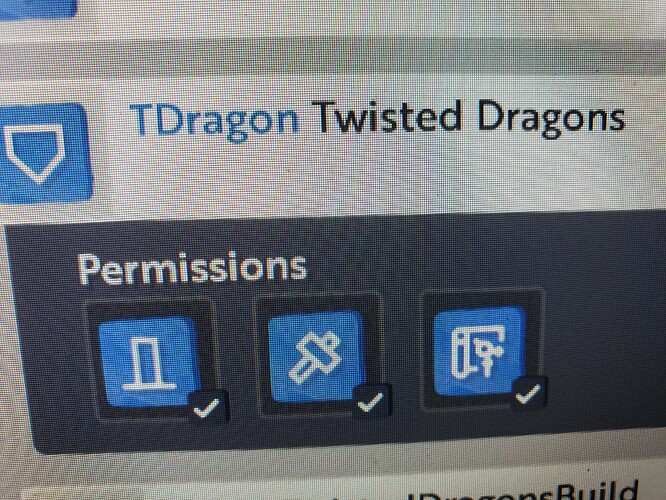 New guild members are not automatically given plot permission when they are approved to the guild.

For whatever reason, posts tagged with Reports are not showing up on the Support forum when set to ‘all’. Might need to get someone to look into the forum software.

Anyway, back to your post. Which GUI menu was this from?

@vdragon basically all our world control beacons are set for when someone joins the guild and is approved they should have those permissions, but the permissions never turn on at all. We have to go and give guild members permissions on each planet manually. Unless I am not understanding the guild setting on the World Control Beacon and assuming incorrectly about how they are meant to be used.

Was the screenshot taken after you had turned on those permissions manually?

Yes I turned them on manually for the world controller to auto set permissions for new guild members and tested. Then I took screenshot for this post. I even tried a faction and that did not work.

I’ll have to check with a designer on this. It could be to do with providing players with the choice of giving guild members permissions to plot on sovereign / creative worlds as well as settlements on the live worlds (as it they are happy to let guild members plot on those worlds and not on creative / sovereign worlds), but it’s just a guess on my part.

Just be clear this is with the world controller for sovs and not beacons themselves. The beacons work perfectly fine for permissions.

With a beacon, you can align one guild to it: 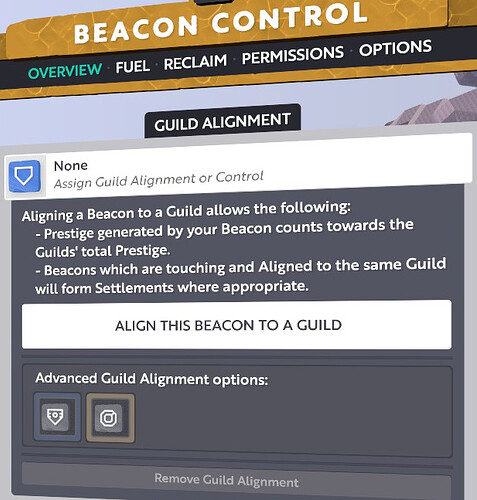 Whereas with the World Control, you can have more than one guild with permissions:

In this case, you have flexibility over how many guilds can have permissions on the world.

So is the world controller not ment to allow guild members automatic access to plotting, porting and mining after they have been approved to the guild or faction?

I’m not entirely sure, I think @rossstephens or @james can answer that.

Cool! Hopefully one of them can clarify.

It does, and testing it myself I cant see anything going wrong either…

thanks for the extra info.

– edit: sorry, it does work correctly! forgot to set permissions.

@DragonTamer I cannot see anything going wrong still on my side…

@DragonTamer the guild members do have the correct permissions in the guild itself too right?

If you read the text in the world-controller it does state that the “plot permission” is granted to “Workers” in the guild, and “edit permission” is granted to “Builders” in the guild. I suppose if you dont read the text you wouldnt realise that perhaps, but it is somewhat consistent with guilds themselves; if a beacon is controlled by a guild it is not every member that can edit the beacon, but only the builders.

So essentially after approving they have to be set to a worker?

Working on mats to pave the road before friday!

So essentially after approving they have to be set to a worker?

This is what I am trying to figure out as well. We are having the same exact issue and the only thing I could tell as a “member” who owns the world, was that the only person who wasn’t given instant access to all the guild permissions I’d checked off was the one who had a different rank than all other guild visitors.

The way the sovereign directions for guild use, to me at least, read as if once i checked off those options then anyone in the guild would be able to build/remove/edit/etc.

But according to what Luca is saying their rank has to actually be altered as well?

Indeed I would prefer it that way but I am with you Luca seems to be saying rank matters.