Release 112: Creatures and Characters (and a Q&A)

So you might have noticed update 112 has been a while in the making, and that’s because it’s our biggest update yet. We’ve made fundamental changes to almost every system in the game, added in a huge number of art assets and laid the foundation for many future updates. For every change you can see, there are loads you can’t (yay, game development!).

Whilst we’re chatting, now also feels like a great time to answer some common questions from the community. Settle in!

We’re fine, and sunny Guildford is also fine. In fact, we’re great! This release lays the groundwork for well over 12 months worth of new features and content. We appreciate and encourage your financial support of the game we aren’t going anywhere, we’ve just been knuckling down to get this big release out the door. In fact, the team is growing, so say hi to @jsouthworth, @olliepurkiss and @gerryjacobs!

This is a decision we’re always juggling: big, infrequent updates vs smaller more frequent updates. We don’t plan to leave multi-month gaps between updates, and we’ll certainly try to avoid them as much as possible in the future. Either way, if you think things are quiet be sure to check in on the Official Oort Online Forum (http://forum.oortonline.com), it’s where we’re most active and share early looks at upcoming features, art and releases.

Throughout early access we’re not planning on having a sale. Why? While the game is in pre-alpha we’re treating it much more as access to an exclusive development club rather than simply just the ability to play a game in early access. With your copy of the game you get access to chat with us directly on the Official Oort Online Forum (http://forum.oortonline.com), the ability to feedback directly to development with surveys, access to and exclusive items and in-game titles that 1.0 players won’t get (which differ depending on which edition of the game you have). We hope when you factor in those extras, you’ll agree it’s worth the current price of entry

We love [feature] as much as you, and we’re really excited to start working on [feature]! Right now we’re working on [other feature], but if you’re really passionate about seeing [feature] soon make sure to grab a copy of the game and join our development club as you’ll be able to vote for [feature] in our next survey. We read all of the feedback in every survey (we even have a quiz to guess your results!) and we really do listen. Your thoughts, ideas and opinions really do shape the development of Oort Online.

Technically, yes. We had expected to deliver what we considered a 1.0 for Oort Online towards the end of this year. We had such an amazing response to the announcement of Oort Online over the last 12 months we decided to go big, even bigger than we’d originally planned to. To support this, we’ve committed more resources and the whole of Wonderstruck and Turbulenz are now working on it (vs 50% of the team this time last year). In fact we’re growing the team still so if you’re a talented game developer/designer/artist, get in touch. So yes, we’d expected to launch a 1.0 this year, but we’re now planning for much more ambitious 1.0 next year. We’ll share more about this in the coming months.

Now we’ve laid the foundations, we’re planning for a release that will enable a big portion of the Oort Online core gameplay loop. This will include portions of the economy, crafting, Beacons and trading. We’ll post more in the coming weeks. As well as that, we’ve got a few other cool announcements to make before the end of the year.

There are obviously some things we can’t discuss, and this is one of them.

This release adds a lot, but there’s still much, much more to come (and I’m going to stop now because I’m so excited I might spill all our secrets). We haven’t even talked about our work on progression, Titans, Portals, Beacons and other super-top-secret features. Follow us on Twitter, Facebook or check out the forum to get the latest when we start teasing what’s next…

We hope you have fun with this update. As always we’re looking forward to your comments and thoughts.

Thanks from the dev team,

If you’re a total Oort nerd, here’s the complete changelog:

Awesome! Can’t wait to log in and poke around

Like dropping Burnt Bacon when you lob an exploding arrow at a mo’pig? 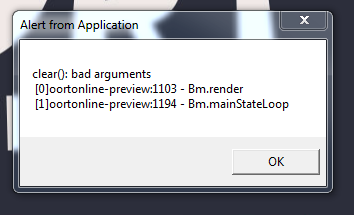 And this is the game version:

because steam seemed to not need to download or patch anything.

I get the exact same error

Delete and reinstall and it works fine. 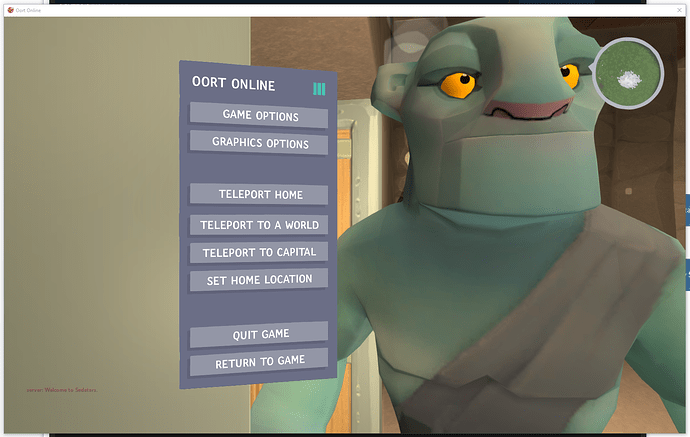 The grappling hook feels so akward to use because of the 1 sec delay you have added, removes a bit of the fun, but guess its just because we got used to the op version.

Steam still needs time to update, so give it a few minutes before trying again.

I understand it more like: You hit the tail of an animal so your chance of getting a drop related to the tail increases.
But your version would be cool too^^

It feels a little weird right now because the delay isn’t visualised, but when the grappling hook is complete it will be more of a:

we’re planning on doing dual weilding sooner rather than later (the code now supports it internally, but no UI for it alongside some other things that need updating internally first), at which point you can get back to a more powerful hook again by doing: ‘left shoot… right shoot, left release… repeat’

shoot; hook flies out not unlike a projectile, hits something and then you start swining.

You might want to change that to swinging xD

By the way, I think it is a bug that you an stand on a wall like that^^ 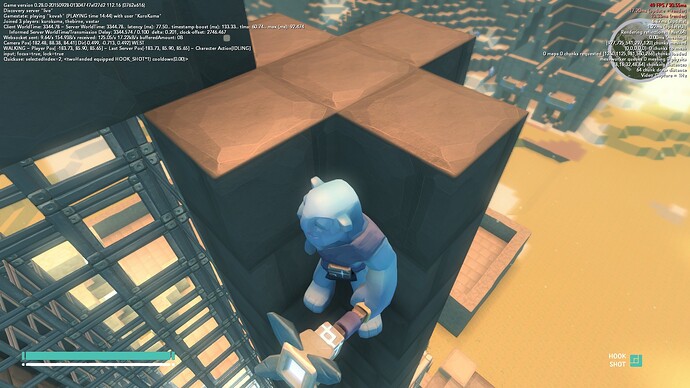 shoot; hook flies out not unlike a projectile, hits something and then you start swining.

You might want to change that to swinging xD

I dunno, I’m going to go with unintentional leak.

Did you change the quality one gets when all graphic settings are on extreme?
Before: 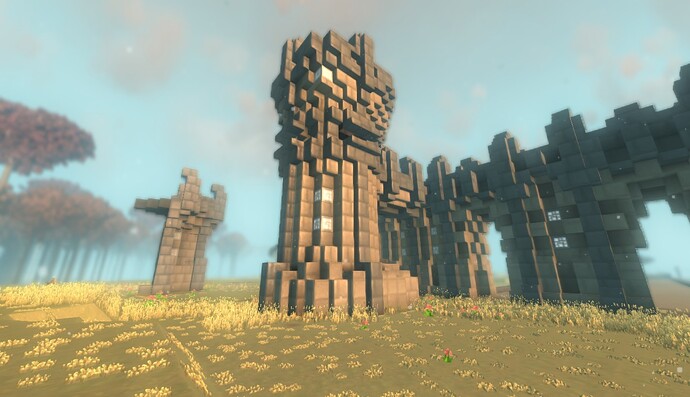 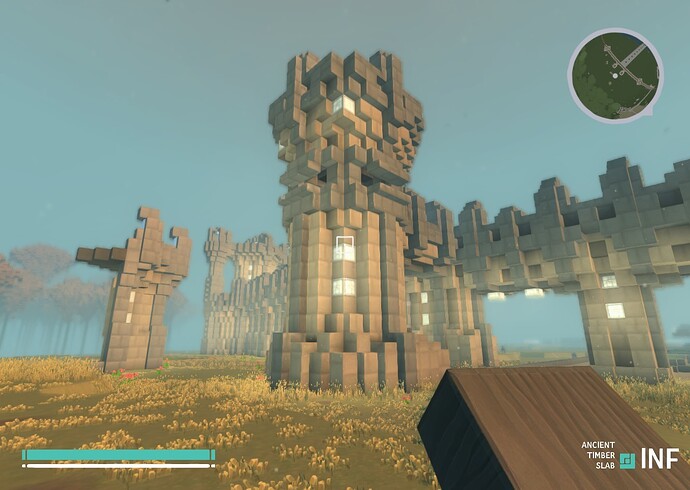 Especially if you look at the small wall piece on the left you can notice quite a lack of details.

Is it intentional that sticks do not stack when you craft them?^^

Game went major buggy when I broke a block. 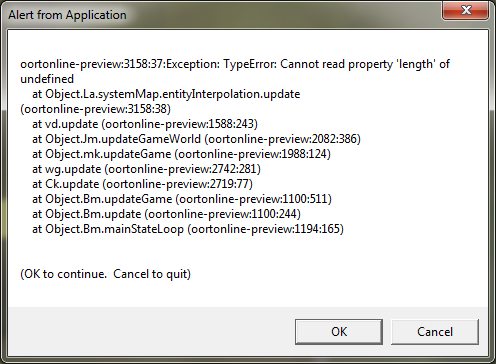 That looks more like you have some light settings tuned down. Is your per pixel lighting on? (Or whatever it is called)

Especially if you look at the small wall piece on the left you can notice quite a lack of details.

Can you compare the same time of day? Blocks will look more detailed when they’re getting a harsh angle on the sunlight and can look quite different at different times of day,

Did the game crash and did you have to restart the game? Also, what is the graphics card you are using?

Happened with the very first block that was added to my inventory. The game crashed and closed on it’s own. I had to open it again.

I made sure it is the same time in both screenshots.

You can also notice this when you approach tree foliage or gleam blocks. They look like you are on on the lowest graphic setting until you are right in front of them.