I get that, I just would like to try to have the best shot for my buck LOL

Well, the key with diamonds is they are found at alt up to alt 30, and they spawn 70+ blocks below the surface so you want as many biomes as possible with the surface land set at 100+. So Mountains, higher hills etc. If you pick biomes with standard ground level land (around alt 65) surfaces they will not have diamonds. Also avoid water masses, so biomes like gleam “spheres” should be avoided as well. Basically give the RNG as many chances at rolling your way as possible by reducing the non-potential diamond biomes, and pick the ones with alt 100 or higher land surfaces (tree tops don’t count, needs to be the land surface from what I understand)

I may test Blast again for diamonds at some point. I did well with my first Blast so I hadn’t tested it more, and I think it could be done better. If I can do so, will post the build.

As Soju-VB said above, you can roll the same build twice and get variation still. It will usually throw in a few biomes you didn’t pick, and sometimes seem to take one out that you did pick.

When it comes to “best” with gems, I want to see the hotspots, not just go off total number and/or %. Much better IMO to have a few large concentrated spots with little lava, than dilute hotspot everywhere with lots of lava. Though I’m not sure on this, I think it is good to choose as few biomes as possible in order to max the size of them, leading possibly to larger spots. If you have more than the minimum in high elevation biomes, go with the ones that seem broadest, least broken up. If you don’t have enough (lv 6 biomes on a T6), go with something to give you good farming for other stuff is my feeling - I like Island Trees on any T6 for the farming, for example.

Edit: Ok, testing this build, I’ll post results later (though may be a fair bit later since will be out a lot today) -

No Rivers
Standard Caves on all (Seems safest from what I’ve seen - Small Caves actually NOT good for low level mining, gives a lot of them filled with lava)

lv 8-
Crystal Mountain - This one, IIRC from exos with it, seems like it might be good, big mountains with lots of Gleam.

Ok, this one turned out pretty well really - since I got Alcyon, may have to swap this out for my current, though I’m going to have to see if any one single area is better than my current mine. Overall diamond count higher though and lots of hotspot around it looks like.

So this might be a decent build to go with.

I am seeing, on this and my other, that some of the largest spots seem to be under the floating mountain areas. They’re pretty broad.

A pain to traverse, though! 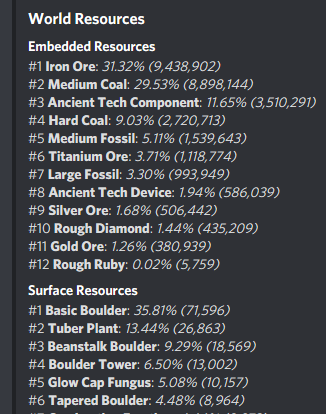 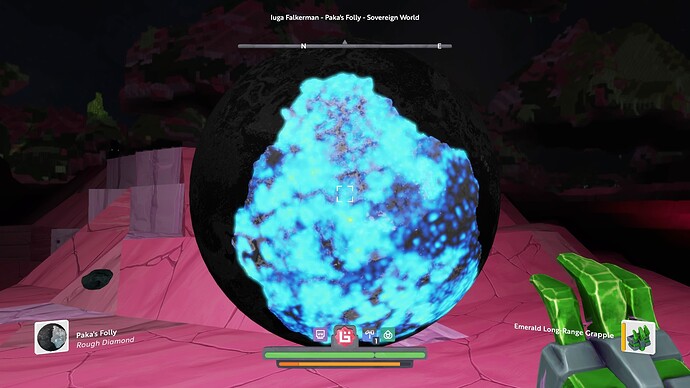 So basically little to no water and high hills and mountains?

Looking at my build some more there, wondering if for T8 Olympus might be the better pick… just can’t tell from the picture they have there how high those mountains are. But they look broad.

Edit again: Yep, trying one more… for science and all that.

Swapping in Olympus, but also, at lv 4, going to try Scenic Mountains instead. 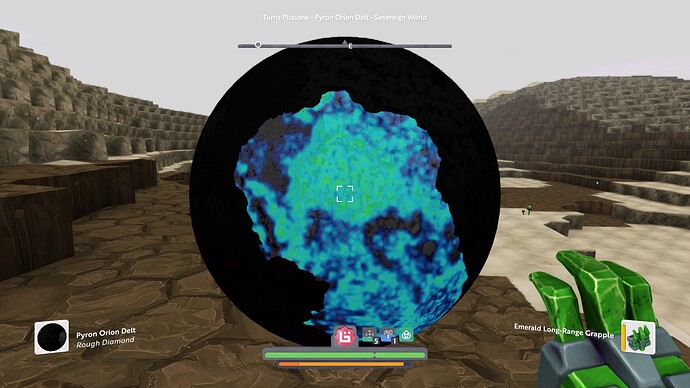 Sadly, this planet on Norkyna. Not sure I’m even going to finalize it since in a week or so it will go in the next clean-up list. But hey, I’m up to supporting WS some more.

I’ll just keep rolling til I get it on Alcyon. Worth rerolling for. Since this one biome along with floating mountains really the good ones, I might just sacrifice the lv 4 high elevation one this time and give myself a little gleam.

Edit: Sorry all, six planets in a row on Norkyna, I’m done with the renting. Wanted to optimize the resource hub more for everybody, and I’m up for supporting the game of course but I can’t do this anymore with not knowing how many I’m going to need to get it, in the case as it appears it might be that it isn’t pure RNG but based on what is where when or whatever… but, still have nice planets to use there!

Wow looks dense. Something i am confused on density to color correlation.

Though, I’ve sometimes found it to mean more there is a longer altitude area of it rather than thicker seams. Varies, but here I think it just means that the brighter spots might have diamond clear up to alt 30. See really bright spots with Topaz a lot as it can be so spread out.

I did keep one of my experiments - I’ll post pics later once I get it all mapped and the mine set up, but way larger hotspot than that even.

If I can get a portal at TNT Norkyna will try to link it there. Really nice planet, and hey, figure you all might as well get some use out of all the money I threw at the attempt.

Sometimes have to learn the hard way, needed a good slap in the face, lol.

I feel bad you got beat up a bit. You quest For Science!! has been admirable.

Really do appreciate it, so glad if it has been of use to you all! It really has been fun, and this wake-up call is probably for the best: I’ll be investing enough over time keeping what I’ve got going, throwing more money at optimizing it might not be the most prudent move.

Even then, if I knew it was a true 50-50 coin toss where the RNG just bit me - I know they are independent events if so, and bad luck happens - I’d still probably throw a little more money at. Problem is, and where I’ll admit I’m a little annoyed right now at not knowing WHAT exactly is the case here, is that it appears it might not be so, that it might be that the system “balances” out the planets somewhat - so if a whole bunch of Norkyna planets expired, I could easily throw hundreds at it without getting one on Alcyon, who knows.

Sorry for the OT vent there, but though I love this game so much and try to never go negative publicly, not knowing what the case is there leading me to possibly completely throw away a bunch of money thinking I had a 50-50 shot when I really didn’t and had no way to know the real odds has sort of left a bad taste in my mouth here.

… But, like I said, the ones I have now on Alcyon ARE still good, better I think than the public worlds, and will try to keep them going, minus any that might prove to be redundant.

It is weird how it rolls out. I did several attempts at tier 1. I was prepared to take any orbit but really wanted Sosorri. Of all, only one was. I opted to keep that one (and except for the magical tree I’m trying to create, it’s got much of what I wanted). I don’t know that I tested the ‘rolls’ enough though. Seemed like I got alot of Alder and Trior.

Yep, I got lucky on my T1, only took me a few tries to get the one I wanted.

USE is tricky, as there are six T1 planets - though clumped into two groups that can be 1x2 portaled to each other at least.

Just to clarify as I know I can get a little grumpy unfairly sometimes, haha… but, that said, unless we did receive clarification on the odds, if it is a random roll or skewed by the current rental planets’ positions (or even by our own, if our own being weighted towards one place alone can change it), I can’t justify to myself trying any more except if I really want to test a build and don’t care where it goes. My big thing was setting up a nice resource hub for everybody in one spot.

May I ask cause I’m ignorant of these things, what would be the cost in running a portal from A to N? I Bad, I imagine…!

Afraid not possible, only can portal to Norkyna from Houchus, with 10 conduits.

I suspect - if the odds are skewed as I mention - that it could be made worse not just by my hub but by the fact that Norkyna is end of the line for the hubs so could be others are doing the same, trying to get Alcyon and scrapping Norkyna rentals, since it is more legwork to get out there!

@bucfanpaka would limiting the selection of mountainous biomes increase density ?

I THINK keeping biome selections to the minimum keeps each one larger - and also, the more you have, the more they may merge into each other, in the case of high elevation biomes potentially lowering them perhaps? So my strategy has been, selections to a minimum with keeping in view, when I have to take a biome that isn’t good for what I’m after (like with lv 6 biomes on a T6) that it is at least something useful otherwise or one where merges with other biomes might not be too harmful (for example, with rubies, in that case avoiding anything high elevation so that the low elevation biomes that are good for it aren’t raised too high if they merge in on them).

@FireAngelDth - Yeah, I definitely found places where the blue is REALLY good, like where it is all squeezed into a narrow altitude range. For whatever reason, I’ve often found the edges of hotspots to be best.

@bucfanpaka have you experimented with any Amethyst builds?

Oh yeah, my Corrosive build here is really the one I feel most comfortable with - the results have been very consistent with it- World "Builds" thread

It is pretty safe bet you’ll get around 200k amethyst and 100k emerald with some pretty good hotspots - what I do with this build is mine right along the edge of the amethyst/emerald hotspot area. It is the most profitable mining I’ve found as you get so much else besides the gems.

But, on this build, if you really didn’t want the emerald, you might be best off taking out Ocean, keeping the water much more shallow and likely giving you much larger amethyst spots.