Although it was a figure of speech, good one.

The one thing I can perceive clearly from this thread is that the devs have failed to correctly judge the outcome of certain small details of an upcoming patch note, and not for the first time.

A lot of good stuff in upcoming patch but getting bogged down in drama from various sides over something that should have been known would cause an upset.

Would be nice to have a big patch (exo worlds!!) without maybe adding stuff that will upset the community.

I understand the need for refinement of game mechanics but I also see that we desperately need to retain as many players we can.
Which one is more important?

James mentioned a coin machine, why not a plot machine, and i will definetly stick around, even by a membership again. Recycling x amount of rock for a plot would work for me.

I’ll just leave this here. Speaks for itself. Although, I say the limits this nerf places on a legitimate, casual player is significant, indeed.

James mentioned a coin machine, why not a plot machine, and i will definetly stick around, even by a membership again. Recycling x amount of rock for a plot would work for me.

Well, I now stand officially corrected.
I say we take it one step further and burn all the witches that exploited this exploit, myself included. I am retiring from this discussion, my friends.

Shine on you crazy diamonds; see you in-game.

Hello and welcome to Elop Portas. The first city with flowing water. Hoping to incorporate water into your build? This is the city for you! Simply build next to the road and we will connect you with water. The theme for this city is Mystic, Ancient, Lost gardens and Ruins with an emphasis on medium and large builds. The word Elop Portas translates into the doors. We would like to see portals to truly interesting places threw out this city of doors. [image] [image] This spot is reserved for …

Probably my favorite group build ever, and I would say, probably the closest thing to the realization of this dream that you’re talking about…

… Except, it came into being back when changes were made to the plot system, and a bunch of people basically got “grandfathered” in and were given bonus plots because they had too many according to the new system. And nothing had a Spark cost, because Spark didn’t exist… and neither did Power… and let’s just say that the brick recipe wasn’t always this complicated…

“Those were professional builders,” and “That’s intended as an endgame, group activity.” TLDR: That’s not for you.

Wow. That’s like telling a kid they’ll never achieve their dreams and to just give up now and look at more mundane activities.
A single person can do great things. Never, ever squander someone’s dreams because the only person who can limit them is themself.

Wow. That’s like telling a kid they’ll never achieve their dreams and to just give up now and look at more mundane activities.
A single person can do great things . Never, ever squander someone’s dreams because the only person who can limit them is themself .

You most definelty upped the grind, and damn well meant to. The recipes tell us your intent clearly. You doubled and tripled the mat requirements on many recipes. You could have made recipes more complex but reduced the amounts to offset the complexity, but you didn’t. You just added the the additional requirements in and multiplied the input mats. Congrats you made the game even less fun to play. Players are understandably leaving because of it. Every time to up the grind you drive away more b…

Edit: Wrong point in the thread

“Those were professional builders,” and “That’s intended as an endgame, group activity.” TLDR: That’s not for you.

Who said this? It wasn’t anyone in the dev team.

I hope the implication here isn’t that the devs said this.

But I didn’t come here to indict them. Their diagnosis was unfortunate but not entirely untrue.

Consider this from the perspective of players not abusing the exploit.

Crafting something isn’t an exploit. If it is, then remove XP from all crafting because anyone that can acquire a large amount of anything that can be crafted into something else will just switch from rocks to that something else. All you’re doing is moving the goal post to the right or left more for someone.

I have over 3k plots on my main character.

I have a large build that I did solo. It is over 15x15 plots and growing. I think that the rocks update is fine. There are plenty of other ways to gain massive amounts of exp. I gain at least 1 - 2 levels each time I log on.

This was an exploit and needs to be nerfed.

There needs to be some background on that pic. That’s incitement.

To be clear, since this thread I for the first time filled all of my 108 table setup and ran it with a pie.

It took me 25 minutes just to fill the queues, and I received just over 500k experience from it. At this rate it would not be possible to fill more than 400 - 500 tables in the duration of a pie, and you wouldn’t get all of the resulting ~2m XP at once like that.

That pic is not from crafting stones only on a live server. I’m probably not even going to bother doing it another 4 times to push him to level 50 if this comes out on tuesday.

There is a lot of BS hype going on right now and it seems like a bunch of people being made to feel like they’ve been missing out on something that wasn’t happening. 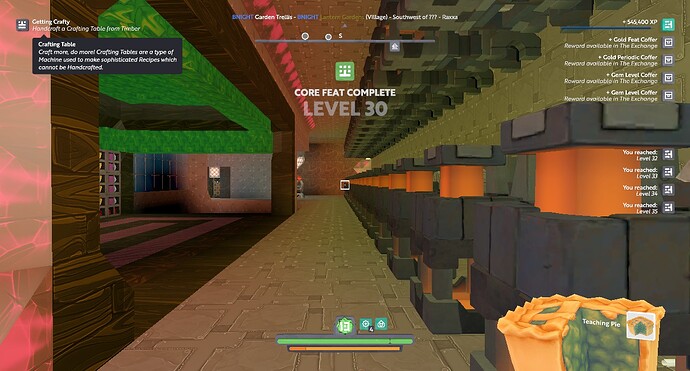 There’s cost associated with this, with keeping the rocks as well. Additional buffs, teleports, etc…

The sorting and handling of them.

The straight up RSI.

This is easy XP, but it’s not an exploit of this magnitude that a some are suddenly trying to make out…

you ahve to use your pie after filling up the tables

I still want a developer to explain to me how crafting rocks into stones is an exploit when you can do this with literately any other item in the game that can be acquired in stupid large amounts.

If you are filling a mass amount of tables you need to eat one before because the time it takes to queue all the stones the first tables are 5-6 batches deep before you log out.

I used a loaf to fill the tables, and a pie to wait. Just more cost.

you wont lose much

First off, why are the new planets bouncing around in the sky? That looks very silly to me and doesn’t make sense.

As for the stone XP nerf: I disagree with it. With $8 masks and $12 paints that are only usable on the character you purchase it on this was the only way I could justify getting new cosmetics for my characters. (Maybe Gleam Club could allow you to use any cosmetics bought on any character on any other character of yours)

This also felt like one of the only ways to get plots at a rate that didn’t feel super slow besides spending money.

Should all crafting stop giving XP at this point? If the rocks are going to stop giving tiny amounts of XP, why are we still learning from crafting other items?

Can we stop getting XP from rocks at lvl 50? That would make sense since at that point we would have crafted enough to know all there is to know about rocks.

It just seems like it is about money. This exploit is slowing people down from potentially buying Cubits which is a problem for sure if it is one of the ways to make money off of the game. To be fair, this game was not made as a work of charity, it was made to bring in profits. If this was being changed as a balance issue, the crafting time would of been balanced as well but it wasn’t. That makes it seem like its a reaction to seeing money flying out the window.

Regardless of the intent behind the change, the way it is being handled makes it seem like it is about money and not balance.

They could have just added another slot to allow 1800 shards in any portals over 9 conduits. Or something that made the longer portals be fueled every 8 days or so. Make those jumps to T6 from T5 a longer length in portals staying fueled.

Except allowing a compacted oort or something similar could work like long term beacon fuel that requires far more resources. I’m guessing that’s where this is heading and based on your previous comments you should be more happy with this solution than the one quotes here. We’d burn less oort/hour to power a portal for 1 week, but possibly double or triple that rate to power the portal for longer.