Planet seems to crash when it would return successfully some ingredients back. So there is higher chance to crash when using Deconstruction Resin 3.

To clarify problem I am able to get this window only in Creative.

I assume that this screen below can’t happen in Creative and when it would happen it forces me back to Sanctum. 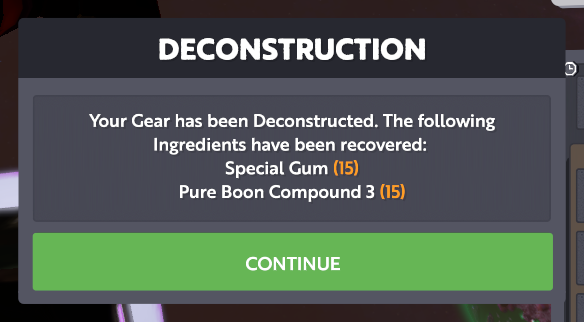 I can confirm this since he did it on my planet while I was on it. As soon as it happened I got:

But was able to reconnect immediately.

Edit: To clarify after talking with @almund , the first screenshot he sent was what he gets on the creative world, vs the second is what you normally get on a normal planet.

It appear to be something with it trying to return a certain amount of the ingredients back to you when they were put in as an infinite source.

Deconstructing really isnt needed on Creative, but he used it out of habit from forging on Live.

You guys deconstructed the entire planet!

We have had notifications of server crashes, so thanks for the reports @almund and @Soju-VB. A bug has been added to the database.

forge items into stacks of

Hi @Jiivita!
@almund has been having the same issue:
Testing 246 - Using deconstruction resin has chance to crash creative planet

@majorvex feel free to merge / delete / lock this thread as you see fit.

Merged in the above 3 posts