I’ve been testing on a local sandbox over the last couple of days using the 3 new default “mixed” worlds and I have to say that after some minor initial concerns (starting in a tier 2 biome, taking longer to break blocks whilst being attacked), I’m actually really liking it a lot.

The fact that some creatures will attack on this initial world, whilst others will just ignore you, adds a really nice element of “do I need to run/attack, or just carry on harvesting/building”. It keeps things interesting and varied in that respect.

This lower level world also has roadrunners, so it’s a nice little introduction to being able to collect a few Oortstones for a first portal.

One thing to note is that meteors will also fall on this lower tier world. I would assume they would only fall in the tier 2 metal and coal biomes, but haven’t confirmed this with the 2 dormant ones I found during my initial testing. A really nice addition to the meteors, is the large amount of gleam gained from them. Just for a couple of dormant meteors, I gained 22 of one gleam colour and 25 of another. I’ll need to see if a completed meteor grants more than this, but either way, this is a nice way to introduce some additional colours into the local sandbox universe without the need to create more planets.

I also took a peek at the debug menu and found a map which shows how the biome spread looks. Before playing, I had the impression that half (or a third of the world) would be dedicated to a particular tier, but seeing them all mixed up and spread out is actually much better for the variance it provides. Especially as the lower level mixed world provides tiers 1-2 of Lush, Coal and Metal world types.

Up to this point I have played through the tutorial and objectives normally, getting to level 12 and the early melee weapon and shield progression feels pretty good, although using a shield does make you feel somewhat invulnerable as long as you can raise it in time and in the right direction of an attack.

Then I cheated a little (ok, a lot) and gave myself a couple of teaching pies, just so I could get some protections and extra skills to go and see what the other 2 worlds were like (I’ll be going back to level 12 with another character just to continue with the progression later).

The biome variance on the middle and upper tier worlds seems really good at first glance too, with the middle level world consisting of tier 2-4 biomes from Lush, Coal, Metal, Shock and Blast worlds…

I’m also glad for the appearance of mineable Oortstone seams on the worlds (although I’ve yet to find a seam in the wild!), and the fact that compact Oortstone can also now be used as a portal fuel!

I’m curious - is the border between biomes clear? I’m especially wondering for when you don’t have the necessary protections?

Actually, that was something I forgot to mention in the post above… it’s actually not clear at all. You can essentially walk into an area needing protection without realizing and will start getting the status effects on screen and start running out of air.

Initially I thought that it would be better to have some sort of clear boundary or notification that an area was unsafe, but now think that it’s actually better without it as it adds a nice “watch-your-step” survival aspect to the higher level worlds. That said, however, maybe it just needs to have a clearer indication that you are running out of air when in an area requiring protection. 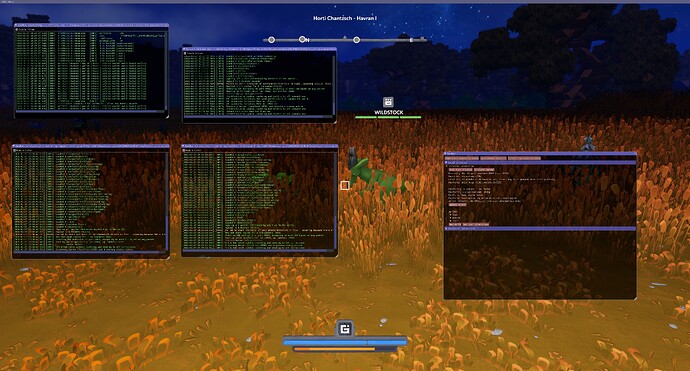 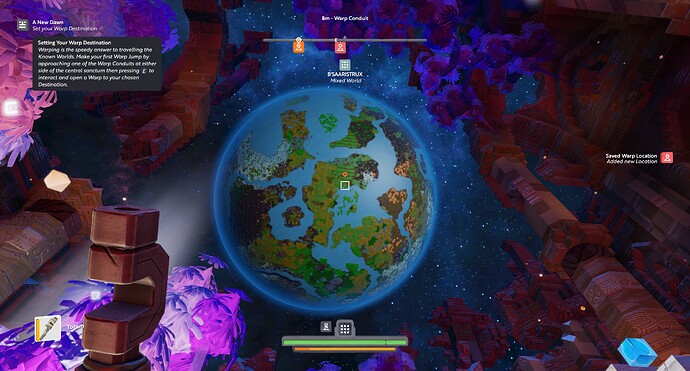 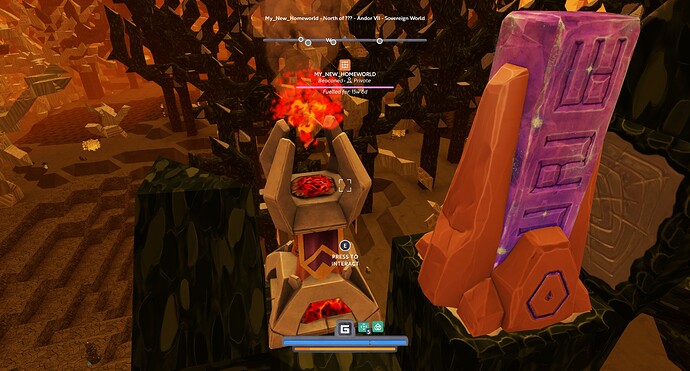 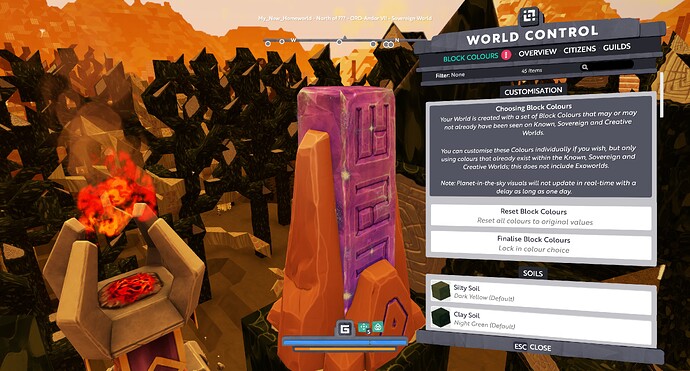 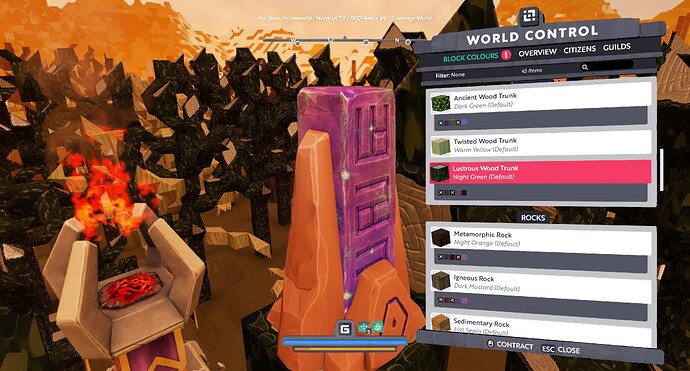 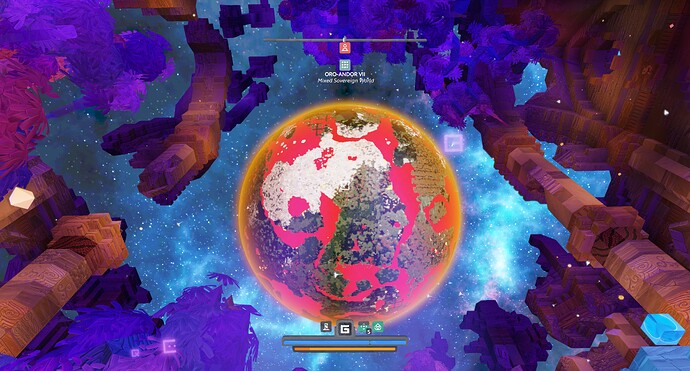 I have followed the route as indicated by DEV-HQ and started with a 3 planets multiverse.
On my second attempt, the script ran completely and the universe [OROtesting] was successfully created.
Now I could start with a new character on the lower tier world
And as @Stretchious has said before, playing the starter tutorial in a new multiverse world is a great experience.
I was immediately attacked from all sides by Stout Spitters and had no more than a totem to defend me … After, I made my first wooden sword it didn’t get much better. … But I did it.
I am simply not a hunter but a builder.

I want to be able to craft and stack and chisel blocks, in short, shape my world.

What immediately disappointed me, was the color palette of the materials with which I was sent out.
Create and host your own universe and immediately get a random dark color palette including colors as Dark Yellow and Silk Yellow.
That’s not exactly what I want as an experienced builder. And when I look as a fresh starting from the surface of my new Low tier planet to the coming Middle tier planet, I see that the outlook doesn’t seem to be much better, and then I have to play there first.

I thought to solve this immediately, by creating another planet, but it also had a random palette that was not much better.

Then I thought I had the solution, by creating a new Sovereign Planet. Then, as we all know, you can choose your color palette yourself.

Bummer … that was a bit disappointing,
saying again I could only choose from an average of 3 dark colors per material. (the full-color palette was not yet available/unlocked)

So for DEV-HQ or our community, I have the following questions?

So a free color choice for 1 planet.
The rest will come later in playing through this universe
Exploring new random EXO planets which I have to add on of course - goo color farming - etc.

Of course, I would like to thank the DEVs for their great work with this upcoming update.

The local universe runs great on my PC as far as I can test it now.
@james and the team Keep on

Hey Stretchious, where in the debug menu did you find that map? And were you an admin at that point in your universe? Thanks!

I’m not sure if it’s a mixed world sample only thing or not as it appears in the section labelled as “Mixed-World Sample”. I’d not noticed the map previously to installing the default mixed world profiles. 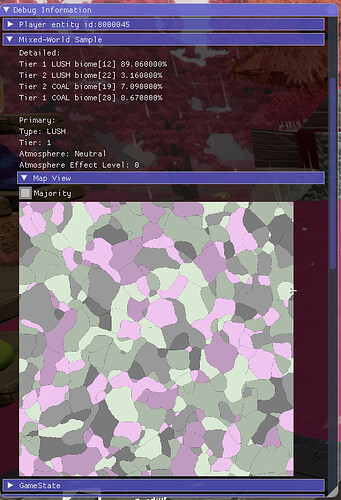