Making this as a general Q/A as well as tips or tricks people have found when using world builder.
I currently don’t have any finished creations myself and am focusing on small parts of the WB to understand how to make them work before smashing the smaller parts together into a larger part and watching the resulting chaos with amusing and sometimes infuriating results (looking at you 3D islands.)

Currently I’ve figured out how to increase the density of many of the islands, but I want fewer of them and with them to be larger as a cohesive whole.
I.e. Less this and more like the original test server floating isles. 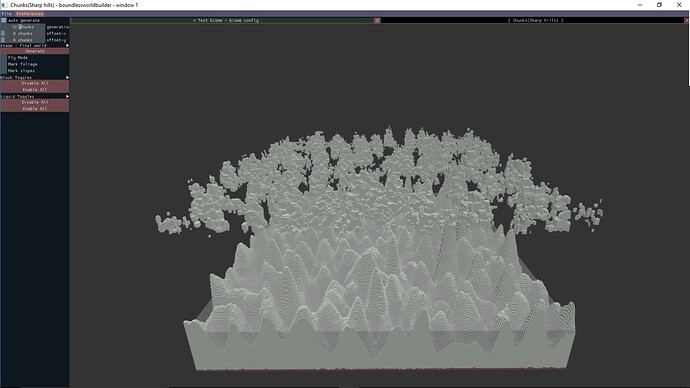 I’ve already started to get them larger than from what I was working with earlier, but its still rough going to get them to be sizable islands that I want.

that worked like a charm. Even better when I used fractal 3D on it. Smoothed the islands out so they aren’t huge broken up chunks of doom. 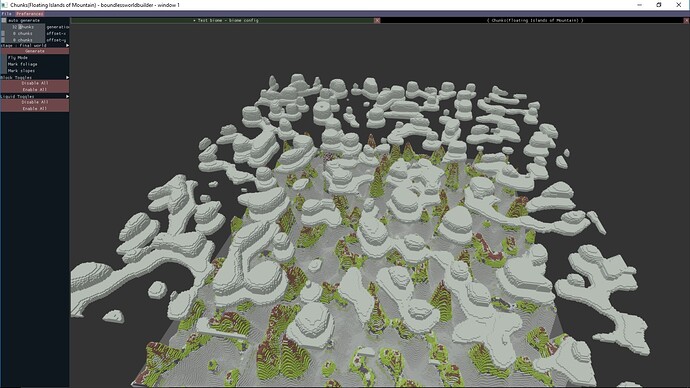 Success!.jpg1601×902 308 KB
Still not what I wanted, but compared to it before, this is a huge step forward, thanks!
And on wards to finding a way to fill it in with blocks and resources so its not a gray mass.
Now if there was a way to make it so they don’t mimic the underlying islands below so it creates some randomness to its layout.
Also remap takes anything above sea (lava) level, and remaps it above everything else if your using it on the 3D islands
Heureka June 29, 2016, 9:18pm #4

With the bias setting in 3d-islands, you can set how much, or little islands you want.
There is input in biome, under couloring in, for adding a substrata to the islands (as you get on the surface in the picture) for some surface.

I’m liking you Heureka. thanks for the info, I’ll put it to work soon 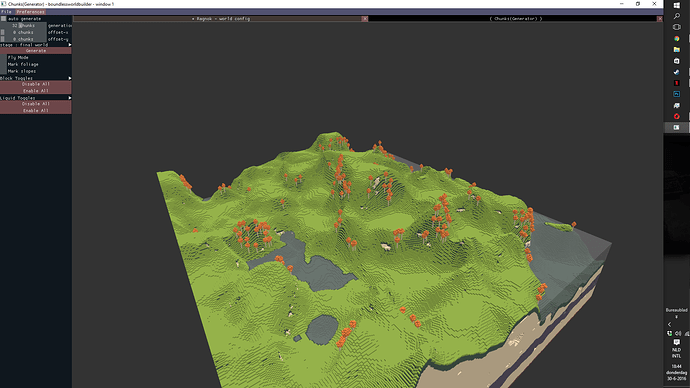 Is this even worth continuing? It is my first normal like world.

Is this even worth continuing?

Definitely! Keep playing and you’ll end up with something even cooler, for sure

Maybe try playing with the substrate layers - add some random patches of stone or dirt or something? Or maybe some sub biomes - add some plateaus! Lots of directions you could go

I recommend some sub biomes, I tend to go less rolling hills and more extreme to navigate myself.
Then again At least you’re able to get trees on your world

The trees are really tricky to get right

Product of today’s bored experimentation.
Gabor 2D trying to make an interesting height map with it and so far its leaning heavily towards making things thin and rather height extreme in my experience.
hills by themselves example before gabor+sum: 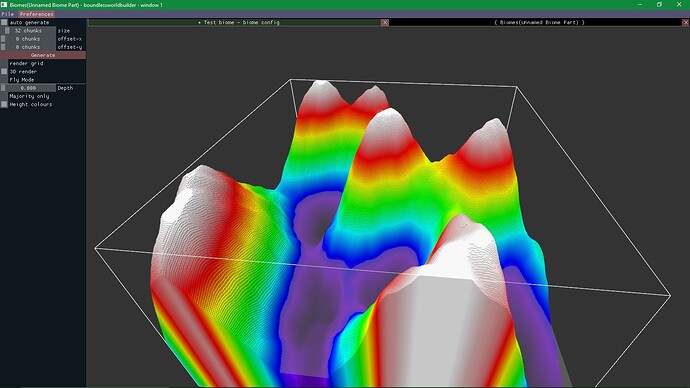 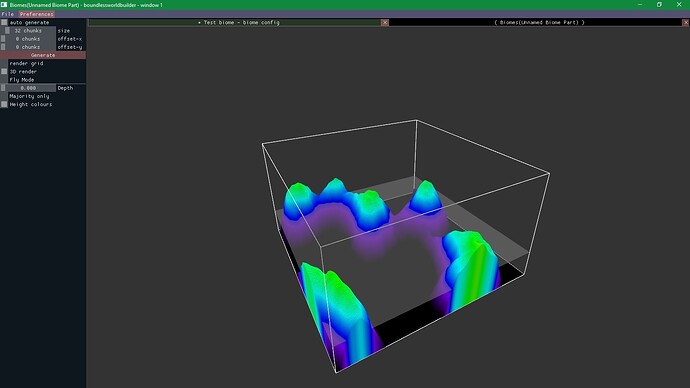 Not recommended for:
Anything that you want some actual land for. This by itself and a few components thrown can take it to the extremes of mountain peaks and crevices. It tends to get really ridiculous really fast.

Made it workable through Sum 2d With rolling hills heightmap thrown in the mix for the product.
Recommended for Islands. Created a lovely height map of sparse islands with gabor and rolling hills map. Just what I was looking for. would be perfect for say a water world or the middle of a large ocean biome. Or just a nice little niche lake biome with some forested islands.

Next Post:
How the I got the trees onto my world (hopefully).
Edit:
updated after tinkering around with the values a bit.Heureka was correct. 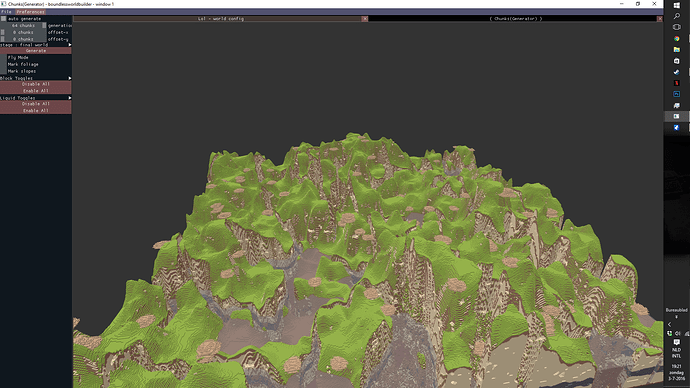 Still trying to getting some more trees on these hills…

Yea the tree addition is proving to be amazingly tricksey. I can copy/paste from the Pre-made hills biome and have it appear, but if I replicate it myself following the rough parameters that I’m able to scrap together from what the devs already have premade, I get… Nothing!
Its irking me since I want to add a few trees to that sparse island biome. Thinking a couple palm trees, but if I can’t get it working then it’ll keep driving me nuts. I’ll post a few pictures later of what I’m talking about.

Product 2D Doesn’t generate anything but a nice green screen

Product is not a generator, its a filter.
There are 2 kinds of nodes, generators that generate noise, and filter that take a noise and modify it.
A filter with no input to modify do not have a output (flat green).

Make sure you add constrain blocktype to the blocktype for the trees where you want them to grow, and maybe put up threeshould for more trees.

You can add more then one constrain types.

Here is a basic tree constrained to metamorphic rock, the default block in worldbuilder, and the threeshould up to max. 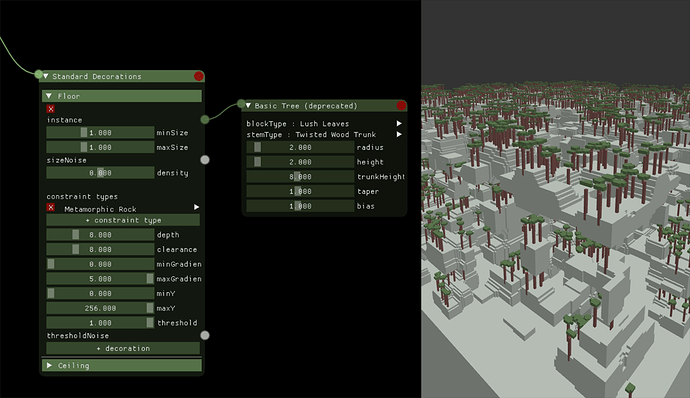 Reviewing what you posted, vs what I had I did every thing correct except I didn’t enable a threshold above 0.000. This actually solved my no tree problem.
Thanks for the pic and the information

That is correct. if you’ll have say a vast tracts of sand and some trees (not a lot) then you’ll add in another decoration and plug in the values you want it set at, so that trees will spawn on the sand. 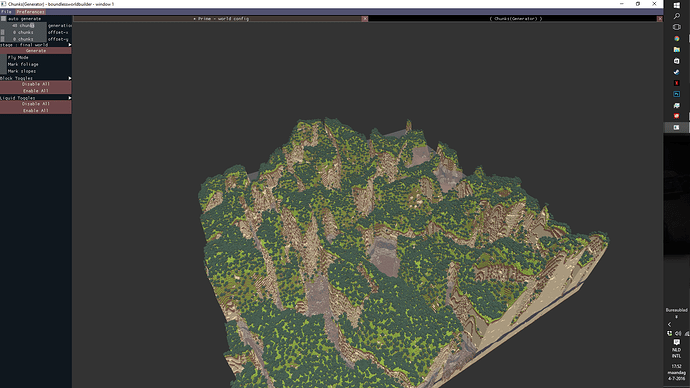 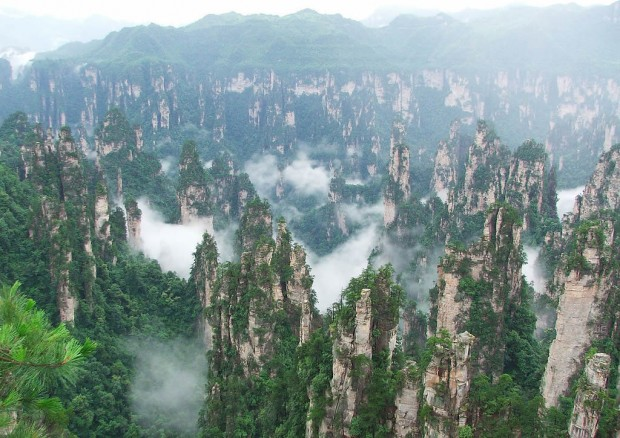 Would you guys like it to play on this world?

You can put a low frequent noise into threshold to get same variation, or spots in placement, and play with threshold-setting to get the amount you want.

Also a noise into sizeNoice let you set the variation off how how tall you you want the trees to variate, settings from 0,5 to 2 x original size, and play with the noise density slider.

With minY/maxY You set the altitude where trees start and stop grow, so you can have different plantation on different heights (or not grow under water).

I know how the Tree Node works

Just asking for your opinion…