Im super curious. i loved the caves on Tamakatos & Vaykaska. they are alive and still going btw. wish i knew what that cave biome was. i dont know how he got foliage and layered caves in the same one…

Yeah, I did end up trying to do it on one and couldn’t get it either.

I’ll try to get some more up today!

I’ll put the T5 ones at the hub just to avoid confusion. I really like the latest batch of T5s - the Burn in particular came out REALLY well. Biome selection for 5s really works well than 6s for it, and by adding in Salt Flats at lv. 3, it caused a merge with Lantern Field and Gleam Spiral to create a huge, excellent hunting ground in one spot.

Also, if you do a T5 or 6 Chill, you HAVE to add in Maze. It not only creates a perfect mining area, but ideal Stardrop gathering spot.

The ones I have on my PS account will probably be later in the day, others I can probably do earlier.

OT, but for those using my planets, probably won’t be around for a week or possibly more after next Monday. I say “probably” because there was a mess-up with some legal paperwork, causing a delay to where I still don’t know if I can travel for what I need (handling my mom’s estate), might be the week after… fyi, legal paperwork completely stinks. Anyways, I’ll try to get the portals all topped completely off right before I leave, and the keeper rentals all have a lot of time on them right now.

Ok, got a few more atlases up!

Unfortunately, Relthu is one of the ones I did on my PS character, so that one will probably be some time this evening.

A few others too.

Better hurry though if interested… all but two that I put up earlier are gone already!

If it starts looking more (as it does this afternoon since I haven’t heard anything back yet) that my travel will be delayed, might try a pure ruby T5 roll and post the build if I can top that last one.

I am new in this game but i love your created worlds!
Thanks for free opening to all Players.
Sorry for my bad english.
lg Black_Lumpi

Thank you so much!!

Feedback on them like this really makes my day.

I love this community so much, some of the finest people I’ve ever met here, and made friends who - along with the escape that the game itself provides - have truly helped and comforted me through some really rough times. I am so glad I can give back to you all in this way.

(OT, but just finished up with some good IRL Ruby mining!

@bucfanpaka should have the forum title of World Baron(ess) or something for simply knowing about everything about how to optimize worlds to get what you want (beautiful terrain, a private ruby planet, etc.

For any who like the Pakaverse, got a new Chill build experiment up that landed on Alcyon and is really good.

What I aimed to do is try to maximize Maze areas. Overall count ended up great, 743k - but I wasn’t going so much for that as for the concentration. I sacrificed Olympus at lv 8 since it takes up so much room and just gives sapphire rings. Instead, I used the one - I forget the name - that has the Corruption trees. I noticed from a previous experiment that biome likes to merge by Maze and gives some good results.

So, have two portals up to Stardrop/Sapphires areas - planet Ristas. (Mostly leaving default names now) If any want a Corruption farm I can open up a portal later, found one particularly good spot on an incline where a nice clump can be farmed.

Even without an atlas, sapphire mining in these Maze areas is easy. Go down 20-40 from the surface, put yourself in with the profitable fossils. Then just go back and forth through the area.

Doing some more playing around.

Beta Lyra Sup - Off Norkyna, Blast. Tried to do a combo Diamond/Ruby world. A few good diamond spots, but just seems like not worth going for rubies except on a dedicated Burn, I’ve got hotspot spread out here but count still pretty low.

Herculp Minn - T5 Burn, Serp. Another thing with rubies, seems T5 gives a much better choice of biomes for them than T6. Count IS lower, but rocks are easier to break, and you know where the planet will land. Can get a planet with hotspot almost over the whole thing, though the best going to be in Graveyard and Ancient Village. I didn’t open a portal to this since the other T5 Burn up is better (close though).

Oh, just rolled something for the first time - a Coal world!

Just put in for it, when it pops, thinking, a good temp large fossil mine in Olympus or Maze for some easy coin.

If any are interested let me know - if Alcyon I’ll open a portal but Norkyna might put out tokens.

The Topaz and Sapphire mines are good for fossils too.

Figured I’d try to top it with this Coal world, going to see if the increase in fossils offsets the loss of gems.

My recommendation would be the Stardrop/Sapphire portals I have up, right now. Reason is, the surface elevation is pretty consistent in the Maze areas, so you don’t even really need an atlas. Dig down 20-30 or 40 below the surface in those and just start digging around. That will put you in good fossil area, and lots of sapphires. Some topaz even too in at least one of them.

Yup okay I have just noticed fossils are money

Coal T6 up, on Alcyon, so have a portal open already!

Labelled Stardrops/Fossils - T6 Coal on the upper tier end. Found a huge Maze area, so some Stardrop collecting there, figured it would be a good portal spot!

Now, from a few test holes, I can’t say it is more profitable than using a Sapphire or Topaz mine for fossils. There are more fossils but losing the gems doesn’t appear at first glance to make up for it. But have fun with it while it’s up!

There is a nice Olympus area south of the portal that seems thick with hard coal.

Sure thing, happy if it helps you all!

I don’t have it mapped, but being a Maze area and the size, really not needed. For any who use it, take a look around to get the feel for it (runs a long way roughly east to west), then dig down 20-40 and tunnel around. There is a fair bit of iron too.

Is it by design that not all of your worlds can be claimed?

It was at first - when I first started doing them, I didn’t open them up on purpose, particularly the ones I knew I wasn’t keeping, as I didn’t want people to put a bunch of effort into them then me not renew. But because I had so many requests from people wanting to set up camp/dump spots, I started just opening most of them up as I do them.

I’ll try to remember to open up the older keepers before too long. 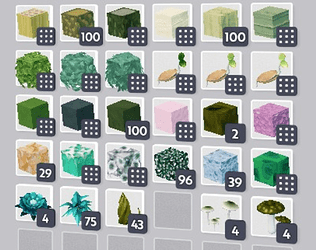