Looking to buy the above hammers. 3x3 is pretty much the only required boon but durability is always a plus.

It comes to about the same cost to make and forge titanium hammers vs gem hammers.

I just hate using gem hammers on lower tier worlds. If the cost is pretty much the same as far as forging I would take gem instead of titanium.

Also damage isn’t a necessity since they are for use on lower tier planets.

If the cost is pretty much the same as far as forging I would take gem instead of titanium.

Despite the common “forging costs are the same” mantra, they’re not.

It’s actually slightly harder (i.e. more costly) to achieve the same boon levels on titanium as on a gem.

That means that if someone doesn’t add damage to the titanium - it will have to hit more. And each hit multiplies your cost. If a tool is 40% cheaper but you have to double hit with it, you’re still paying more to use it than the single-hitting tool.

End of the day, there are plenty of snippets around here showing math but across the entire process it’s typically both cheaper and easier to produce an equal output using forged gem than titanium.

Still on the lookout? If so - what tier.

Yes still looking and tier 4 would be fine.

Are you ok with Topaz? It has higher durability and action speed. 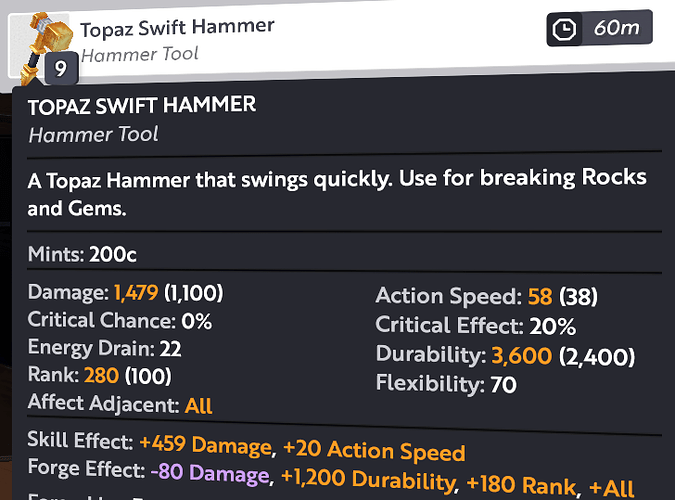 Topaz would be fine and my budget is 600k. Might be able to come up with a bit more

Will get it started

They are ready. When / where would you like to meet up

I just walked in the door and was going to load up now. I could meet you at gtg hub or tnt hub

This topic was automatically closed 60 minutes after the last reply. New replies are no longer allowed.