Looking for around 100 pieces so 500k coin, I will not be on until Sunday, but pm me here and we can hand trade if you are interested☺️ Happy hunting!

I will put up baskets on Sunday at MT Olympus, portal through Pheminorum at TNT mega hub

That’s one of my fav colors in the game

I was still a newbie during the gleambow last year and I had no idea how nice any of the shadow colors were going to look, But shadow cerulean takes the take it’s definitely my favorite

If I have some leftover at the end of this I’ll let you know but one of my favorites, too. Hopefully others save you some, this is one of the most sought after colors in the game.

That’s pretty good coin, if I see any blue, I’ll smashy-grab for ya! =D

Definitely my pick of all the colours. I only did a handful of meteors during the first gleambow event as I found it more of a nuisance than it was worth as I had no idea how much I would want all those blocks in the future, however I was lucky enough to end up with 5 pieces of shadow cerulean… since then I have done everything I can to collect as much of it as possible, I have begged, borrowed, cheated and stolen, lol (mostly I have just paid whatever price anyone has demanded for it) 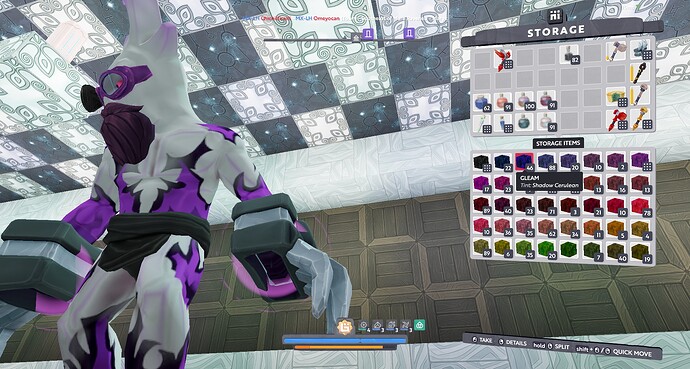 Oh you had those for sale last gleambow? I would have given you my first born for the lot

I hope to get close to 100 lol I haven’t been able to game due to work, but hopefully I can grind on Sunday for some gleam ■■■■■

I have about 3 ss of night azure kernels but only 8 shadow cerulean gleam so my goo production is extremely slow. I wish to build more with that color without having to buy goo or paint

Oh you just want it to make Shadow Cerulean paint! A hint and a tease for you… Night Azure goo will mutate to Shadow Cerulean on around about 30 different colours of gleam.