Something’s up … the game is saying that my main character only has 1 of 1 plots already plotted wherever I try to add plots.

I had used nearly 1000 of 1124 or something last I remember looking … either way I was a way off ‘full’ … and even when I’ve used all my plots it says the total at least.

Have I broken Boundless?

Here’s ( what also seems incorrect ) my character total, which has an odd ‘Unused Plots’ value since I still more to go.

I’m reticent to add more, given this oddity.

It also wouldn’t let me adjust some permissions properly, either … which was also weird.

what in the name of zeus is that?

i’ve never heard of that

btw - you talking about pop up message when trying to place a plot? is it really a message about your total plots available vs. already used or about this particular area already plotted? (just checking - sometime we all go blind and misread)

I’m talking about the literal message.

I’ll edit in a screen shot or two into the main thing.

I’m not a complete idiot, however appearances might seem.

what in the name of zeus is that?

i’ve never heard of that

I’m not a complete idiot, however appearances might seem.

I had my suspicions but now I see you are wise

that’s a weird one indeed - you’ve been reduced to homeless status almost now;

No offence, mate, but if you’re not going to be helpful could you take the hint and let someone that is post?

could you take the hint and let someone that is post?

It’s a known bug. When you get to your last available plots. Message will change according to how many you had before you started plotting during that session.

Just get more plots and the amount will fix itself

Doesn’t mean your plots have disappeared.

Cheers, Maude … thing is, I’ve reached my last plot before, and it didn’t do this … plus … I wasn’t at my last plot … for sure.

I was actually keeping an eye on it.

Could it ACTUALLY be something weird about that 10% thing that boundmore mentioned?

your guess is as good as mine.

I’ve gotten the same kind of line of text before when I’ve been plotting, it would say like 7/8 and the 8/8 even though I have a lot more plots than that, i had just simply run out of the plots i had redeemed.

You can always ping the devs, see if they will respond

Interesting. You guys make me want to use all of my plots to try and trigger this bug.

if you need plotters, let me know, i have a bunch XD

Is this only happening on your main character or does it also happen on your alts & other characters (if applicable)?

What does your inventory say about your plot usage? 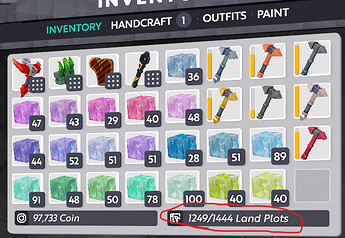 Good shouts, @majorvex + @Rydralain … yeah, it now says i’m full up … thing is, I wasn’t, and I was actively looking at it …

Will log in as hunter and see what’s what there. 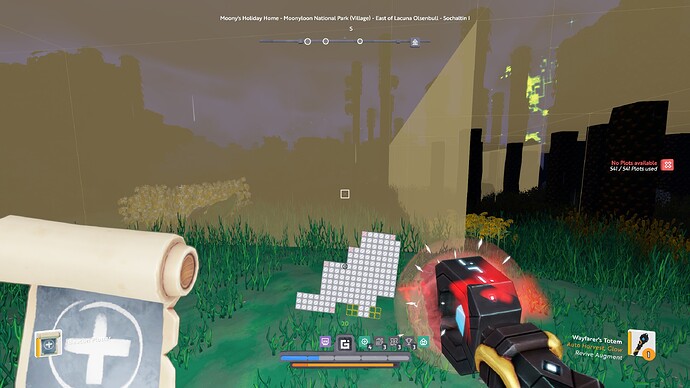 Also, thanks for this, good to know … I’d forgotten about that!

Interesting. You guys make me want to use all of my plots to try and trigger this bug.