One of the main things that attracted me to this game was the idea that we could grappling hook up to a giant floating island-monster and have an epic battle with monsters that live on it, and then bring the titan down and take its core. The core would allow you to build your own floating island thing. It seems there hasn’t been much of a discussion on this, and I haven’t posted in about 2 years.

Are titans in the game yet?

It seems nobody wants to be the one to answer this question, so I will…
No. There are no Titans in the game yet. And why is a bit of an interesting paradox, I guess. You see, Titans are huge, mobile, destructive entities of unfathomable power. A literal unstoppable force. Beacons on the other hand… are an immovable object of sorts- invulnerable to damage, protected from harm of any sort. These two game play mechanics together though… that presents a bit of a game design challenge. The plot system is a core part of Boundless. Yet the Titans are the big promised boss of the game. I think we will see them introduced to the game… but I doubt they will make it in time for the launch of the game. Unless Wonderstruck has been keeping some titanic secrets that even the data miners have not yet leaked… I’ll keep my fingers crossed and grapple hooks ready.

Why do they have to be destructible? Could just make em float around, that’ll solve the problem.

I hardly imagine such fights with current battle system and monster abilities, that are insane in my opinion. When every monster ragdolls you around the place, it’s hard to fight atop of anything. Adding a huge AOE effects, that monsterrs “strong” and above have and we see that its impossible. Even now if you go solo taking meteor cores, it takes a lot of time and nervs cause there’s no way you can avoid damage and being kicked from one corner to another all the time. Yes, armor saves and reduces damage, but doesnt allow to survive even when core is lvl1 (only trees around can help). So first of all current battle mechanics and monster abilities (cluster bombs? Srsly? Who made it?) must be remade and balanced with player abilities.

because a player or group of players could potentially wall in a titan with plots and immobilize it or isolate it for themselves, preventing other players from gaining access to it. I imagine Titans will need to exist on a world without beacons. Or perhaps a more elegant solution is found. Either way, to drop them into the existing game environment would be a costly mistake.

if fighting titan is an event, just like meteorite, plotting and other things that can affect fair fight can be disabled for players for the duration of the event

Probably the simplest thing they could do would be to block off part of a planet against settlement. Make the terrain all nice and pretty, maybe throw in some prefabs, and now you’ve got an “arena” or battlefield of sorts, just like you’d expect a spawn location for a unique creature in any other MMO.

They aren’t in the game yet, so they don’t necessarily need to be clearly defined. Especially since as you say, it presents a big of a game design challenge the way they are currently described.

I agree with Ingvar that they don’t necessary have to be mobile. Make them tethered to a certain point that doesn’t have a beacon area. Come up with reasons for why they would appear on the planet. Maybe they’re alien visitors that appear and will siphon the energy from the planet, create a literal vacuum of magma that they consume. If not killed in a certain amount of time, they eventually fly back up into space and disappear.

Adding a huge AOE effects, that monsterrs “strong” and above have and we see that its impossible.

This, to me, sounds like it could be an incredibly fun aspect to the battle. If it were easy, it wouldn’t really be epic. The thought of getting flung off of a titan is exciting to me. You have to have some risk and sense of danger in a game, otherwise it’ll just be a cake walk.

Either way, to drop them into the existing game environment would be a costly mistake.

I don’t think so. They advertise the game to feature titans, so doing otherwise would be costly imo. Granted, I was more excited about PvE aspects to this game than I was building, although I do like the building already. From what I’ve seen, they should really be fleshing out the PvE in this game more as the building is already really good.

they should really be fleshing out the PvE in this game more as the building is already really good.

No, we should get both.

Pretty sure they’ve been fleshing out pve… that includes the custom item system (centraforge) the skill revamp, wearables, mob balance, planet difficulty, etc. It’s way more than just Titans. And it’s not as if they can’t work on several things at once, various devs specialize in various skills and areas of the game after all.

I’d be okay with just large monsters that are difficult to kill as well. Even if titans don’t make it in the game, if we have some difficult monsters I’d be cool with it.

There are art assets for 3 (?) Large creatures with Ai presumably being developed for them as well. These should be a sort of progression boss or challenge mob. There is the stone thrower, the ground basher, and the Giant Worm. I’ll have to dig up their concept art around here somewhere…

These things are amazing!! And holy ■■■■ the big ones are... well, BIG! I can just imagine the bigger ones slinking across a vast desert or maybe even an arctic tundra. Do they actually displace block, and how fast do they displace them?

Oh nice! That is definitely encouraging for me. I thought all we were going to have were those stone shooters.

I believe the worms are after launch, but still the giant stone throwers and ground bashers will be awesome!

… and don’t forget about the Hunters

Hunter Master Sheet [image] Key Visual Features: Melee Creature Classic Progression\Power (5 tiers) Elemental Progression Exotic Progression Hunter General Description: The Hunter is an ethereal, dangerous creature who stalks players before attacking then disappearing ethereally. It is a mysterious and fearsome creature that spells trouble for players mainly on middle and high threat worlds. They can be found alone or in small groups. They do not have an idle state, and spawn in an agitat…

And also don’t forget the concept for the Protectors 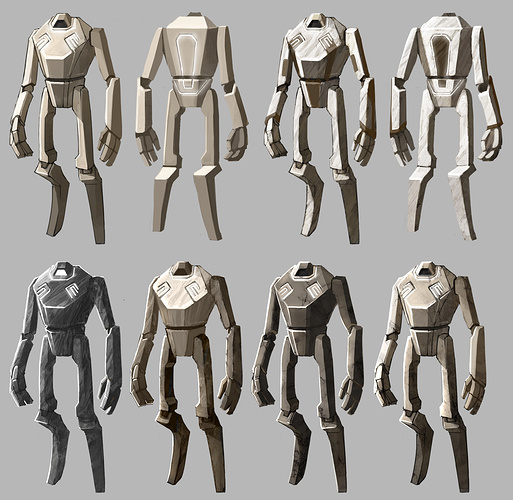 I think the Protectors will be introduced in game at the same time as Titans, so not likely for 1.0 release.

Yeah, I’m really ready to start adding those beams and columns that I know have been in the works.