I’ve been thinking about this issue for a while, based on a handful of observations in-game:

I don’t think I’m alone – here’s a comment from @pseudonym84 that sums up the situation pretty well:

There’s this odd feeling once you finish something that all you really created was an empty space.

And one more observation:

So I submit to you all that,

Because builder-types are gonna build regardless; we can’t not. But without reasons to occupy the spaces we’ve made, we’ll just move on, or out, or up, and keep building more empty shells, which makes the world feel deserted instead of alive. And then everybody’s sad.

So that’s the problem.

As for solutions, well, I can come up with ideas all day long… Disclaimer, though, I’m still newish and I dunno what, if any, plans the devs may have on this front. Speaking of which, is there some sort of overall roadmap? But anyway, sorry if this is all obvious and will be implemented next patch and has been in the works forever.

Right, ideas. Here are a handful of irl building concepts/“purposes” that I think we could adapt to Boundless world and mechanics:

SHELTER
…from the elements. Only matters if the elements actually hurt you. I have great hopes for the toxic atmospheres, whenever those go live.

ZONING
By which I don’t mean the boring sim city kind but rather some sort of effect granted at the level of a single plot that would change some aspect of game-mechanics within that plot. I’d expect the costs of applying these things to be fairly steep and require maintenance, much like portals.

INTERACTIVITY
As in, more objects that can do things in response to some trigger, either automated or player-given.

SUPER-CUSTOMIZABLE THINGS
As in, those decals @Minyi was showing us. MOAR. ALL OF THEM.

27 Likes
Feedback & Suggestions from a new player
What turns you off playing Boundless?
Healing Chamber and Pay per use locks
Coin Sink, End-Game Goals, and Everything Nice
Cookviper August 15, 2017, 9:11pm #2

I couldn’t agree more. So many good ideas there I can’t even pick one. But I would like to bring out the importance of this because at the moment I am waiting for one of my favorite games to release an update that adds this exact type of content to the game. Instead of creating an empty hull of a ship, players are gonna need to build living quarters, engine room, kitchen, medical bay, and many other rooms each with their own unique items and purposes. Each room is not only required to handle a crew, they are also used and useful. It’s going to add an enormous amount of depth to the game. If boundless had this type of thing implemented I would fart a brick of pure concentrated joy.

that sounds…painful? BUT WORTH IT!

I build the majority of my builds with exactly this in mind. I would love additional props to help fill my builds and better communicate the reason for my builds existence. Often my builds are planned on a room-by-room basis with each room having a pre-determined role to justify it’s existence, even if it’s a role-play prop in nature. Examples of this I have previously built in boundless include my Tavern on Sedatars, complete with bar, mead cellar, kitchen, freezer, and rooms for weary adventures. This build was made back when the only “prop” in game… was doors and torches. Imagine what a re-make with props under development and more would look like!

Now open for business! The Tavern of the Setting Sun Creations

Are you out for a brew, or perhaps looking for a place to rest after a long day of battling Titans and Protectors? Settle down for the night with a brew from the Tavern of the Setting Sun! Found in the city Helios Landing on planet Sedatars, our tavern has accommodations for the weary adventurer or even your whole guild party! Found right across from the Helios Guild Embassy. [image] Plenty of space to celebrate or unwind after a long day. [image] Over a dozen brews on tap, every day! [im…

Great post!! I really like the idea of the training arena so that we can test all sorts of things. I would especially like if inside these you could due to test certain skills with no effect on the world and your items outside of the area too. The zoning in general is an awesome idea

Voice over IP would also be a cool idea, as well as having voice chats in parties (which would be another cool thing)

Adding VoIP is not a trivial thing- especially when you consider how much bandwidth the game is already occupying. More to the point, when you consider that 3rd party services like discord are both free and we’ll developed, there really is little need for it. Idk, PS4 will likely need it’s own solution for voice if it is included at all.

Props will certainly help make things more homely, though nothing makes me happier than creating something that actually serves a purpose.

Shelters on seemingly uninhabitable planets is something I’m aching for in Boundless. Scorching hot magma planets and frozen ice worlds have to be a thing - not just aesthetically hot or cold, but actually hot or actually cold. Make some planets too hot or cold to live on without the rights skills or structures.

For the underwater thing I think you could as easily change the behavior of the water as the glass – you’d have to make it so a side-to-side interface between water & nonwater was transparent, the way the top and bottom interfaces already are. …uh that was quite the sentence. I mean, right now you can look vertically through glass and into water, but not horizontally. (No idea if that’s any easier/harder than changing glass.)

Edit: Anyway, my worry with just adding props is that we’ll have the same situation as now, only…prettier. What will keep us from just becoming innumerable planetsful of dollhouses?

Well if there are enough kinetic block types, and perhaps some simple switches, I could spend hours making more courses along the lines of Spitter’s Maw;

Two weeks ago @Jeffrotheswell had this idea; Having absolutely no experience building such things, I figured I was perfect for the job! And so I present; 'Spitter's Maw'! (cue terrifying music) To avoid spoiling the experience for people who have yet to venture inside, I'll save the screenshots for the bottom of the post, and hide them behind a spoiler tag. Location: Elop Portas, at the crevasse beside the dragon's head. The entrance to the trials is located here; (you jump down the well…

I’d still like more than that though. If I had a magic wand that’d give me any feature I wanted, I’d have harsh environments, and a practical need to construct shelters from monsters, weather conditions, and other environmental hazards.

Logic gates a-la Redstone would also be very nice, and add endless longevity to the game.

Oh Nooooo! The wonderful frustration that would ensue!

Also had another idea. What if you could trap/tame monsters and create your own fighting dungeon! Or, if you could put specific monsters in specific places that wouldnt disappear or could be pretty cool. Like @Pseudonym84’s shop spitter cage! 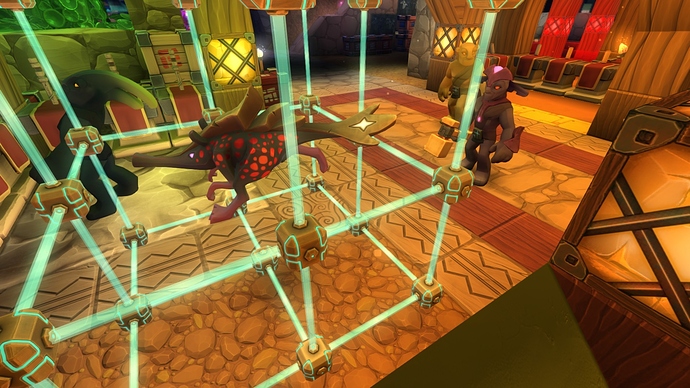 Agreed, a redstone-esque feature would be great fun and add a huge amount of longevity to the game. There could be a whole new skillset etc… to specialise as an engineer or something to do these things.

The topic appears frozen and i didn’t find any dev response so far. I’d like to wake it up.

I am engineer, so basically i love to create moving objects with use, i.e. an elevator. I know in voxel environmemt those dynamic items create a huge amount of problems and bugs, messing with the physical engine.

But though, do we have any hint that there will be objects able to move via interactive systems?

Let me give you an idea how to solve problems like “lifting a mountain” with a hydraulic system:

You could implement player made blocks which follow gravity, think of a plate. Connect 9 plates (3 x 3) to have a platform.
The whole platform without being lifted by a device will always drop until one of its elements hit on a fix block below.

Above the center plate of the platform there will be a device. The device has a rope going down straight. The rope can be up to i.e. 10 blocks long. So the device (including the rope) can lift the platform up to 10 blocks, in case there is no fix block stopping the platform from moving upwards.

Another idea is a cannon shooting a player from one place to another. Makinging him able to basically fly pretty fast over a planet. The cannon could have limitted range and you can extent the range by placing it on higher elevation. Shooting the player i.e. into a lake so you are not diying on impact.

I like all kind of “minecraft redstone” dynamics and would really miss them in case of not being part of boundless. It was one of my personal creativity drivers and long term motivations to invent new “machinery” with purpose.

So will we see it in boundless @james?
I didn’t see it on the feature implementations for 1.0. So i guess definetly not in 1.0?