UPDATE Since we’ve seen some awesome screenshots already, and with the editor going into the live game today, we’ve extended the deadline for this competition to give even more citizens their chance to enter. We will now consider entries up until the end of Sunday the 10th March - give it your best shot folks!

As you’ve possibly seen on James’ Testing release notes, we’re putting out a cool new prototype feature on Testing which we think you’ll all really like. You can now edit the sanctum in Boundless! Of course, this is the very early days of the feature, but it lays the groundwork - you could say, the blueprint - for future updates that we’re really excited about.

We’re also about to release Gleambow Racing (as seen on the roadmap post) and would like a nice new sanctum to commemorate the event - this is where our awesome community comes in! 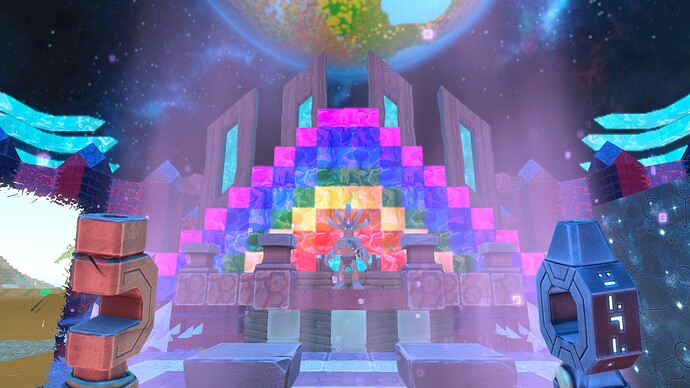 We’d like you to make your attempt at decorating the Sanctum - we’ll choose our favourite, and it’ll appear in-game to commemorate the Gleambow Racing event. Your attempt will be seen by everyone who enters Boundless during the event - you’ll be famous throughout the known worlds!

To enter, put some screenshots in this thread, then send us the file (you can export this in the editor) to boundless@turbulenz.com. We’ll judge the entries and make our decision next week - the deadline for entries will be Sunday the 10th March.

Clearly, the Sanctum is an important part of the game’s opening, and so we can’t have anything interfere with that for new players. As such, there are some limitations to the edits we’d like to see. Anything which doesn’t follow these we simply won’t be able to use.

Put simply, please do not make any edits to the initial corridor, the portals, the elder, the plinths, or obstruct the view of the planet in any way.

It’s best to focus on decorating, rather than rebuilding - there’s plenty of scope to be super creative, so we can’t wait to see your entries!

Good luck all - your one week starts NOW!

Yay for a building competition and fun time!

You can now edit the sanctum in Boundless!

This is SO COOL!!
haha awesome idea guys!

Put simply, please do not make any edits to the initial corridor, the portals, the elder, the plinths, or obstruct the view of the planet in any way.

ohhhh ok. I was going to make it bigger and change out the blocks in the corridor heh.

It’s best to focus on decorating, rather than rebuilding

still, this will be fun! looking forward to seeing all the entries!

Will there eventually be plans to add a testing feature to the PS4 for PS4 players to participate?

The hint to the blueprint system is quite nice

Can we get a bit more info on gleambow racing do I need a bow do I need a grapple is it going to be colorful is it for A certain holiday is it a gleam event. Just to help feed some ideas for the sanctum build.

Also when we we get access to those gleam colors

The hint to the blueprint system is quite nice

My guess, gleambow racing will reward those color gleam blocks.

I believe testing is accessible only for steam users

its just placeing props no color changeing the blocks

its just placeing props no color changeing the blocks

With the F9 debug interface you can access all colours of all blocks.

so we are allowed to change fx the current floor with another color? Or can I change any block just not the layout? is that what is means with no edits

This game’s devs are awesome. I’ve always said it!