Does it need a buff? Thoughts

Fuel is any item that can be put into a Furnace or a Spark Generator to generate Heat or Spark respectively. Any of the following can be burned as fuel. 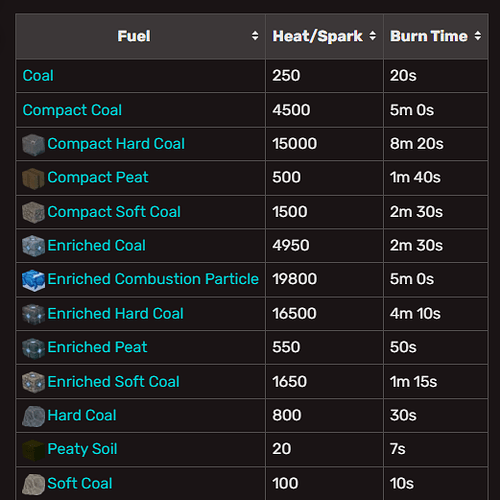 I never did feel like it was worth it. I remember just burning the compact stuff, as it was the most efficient I thought at the time

It doesn’t look like it’s worth using enriched coal especially when you have to factor in buying the Kindling Shred.

I can only speak for Compact Hard Coal vs Enriched Combustion Particle.

It depends, If you grow you own fuel products like I do and want to get the absolute most out of the hard coal you have, then I would say I think it is worth using Enriched Combustion Particle, I did some fuzzy maths somewhere

Does it need a buff?

I think it might considering very few people use it.

After reading the post about crafting timers in another thread and then seeing this, I had a pretty hearty laugh.

Cook times are the crafting times of the furnace right? I guess in a “post-spark” boundless if there are no furnace timers coal is just bigger and bigger blocks of peat.

I’m pretty sure that being twice as fast was the selling point for this one. Is it even as much additional spark as you would get from directly burning the additional ingredients?

Always thought they did to make them more worth it yup.

I also looked at the special compacted fuels again the other day and remembered why I never bothered with them in the first place. For a casual solo player like myself, it’s just not worth the time/mental effort of preparing these advanced fuels.

At the time of the addition of these fuels, this was what was announced about them:

For the time they’d take me, I could spend that time mining for gems and more coal anyway, and although I’ll use a few hundreds of compact coals every so often, I would think I probably use little coal compared to what other people might be using.

I’m pretty sure that being twice as fast was the selling point for this one. Is it even as much additional spark as you would get from directly burning the additional ingredients?

I just need more spark for the spark generator. Not more heat. So that’s why the quicker burn time doesn’t matter to me.

I get you. That’s what I’m saying.

If you just want spark then if the pieces give more than the block, it’s no good to make the block.

It’s not that the block is bad, it’s just not the one you need.

I have done some pretty deep research into the advanced fuels to see what was more worth it. I do think those types of fuels need some values tweaking for sure

Someone woke up the latest crafting times spectacle today lol.

I’m not sure how that reflects in a hard fuel/spark to cost comparison but I do know they were very welcome by some. My point here definitely isn’t “right or wrong” just “not all things for all players”. In overall balance though it still has to be considered.

The sum of the whole is greater than the parts, spark wise…

Additionally you get extra fuels for each step along the way if you mass craft.

Still, I was bummed that the returns weren’t higher for how much work is involved, even counting the bonus fuels and experience gained.
(And it definitely wasn’t worth the effort for trying to sell the spark, selling the individual components netted way more profit)

The big thing for me is I believe combustion crops should not be an actual 3D model. Not sure if I’m the only one that has an issue with 3x3 hit box on them with harvesting but it’s a pain in the toilet cushion for me.

I use combustion in my furnaces. I’d never turn down a buff on any of the fuels.

Wait Peaty Soil is Fuel I can turn that into spark?

compact peaty soil into spark generators, when you break the generators you get x amount of spark.

Wait Peaty Soil is Fuel I can turn that into spark?

Yes, compact for more spark as @Eneitgranny mentioned. Also, since you mentioned fuel, you can also use it in a furnace.

Also don’t forget trunk is spark/fuel. I think a lot of players don’t realize that.

The sum of the whole is greater than the parts, spark wise…

Thanks for clarifying, I figured it was due to the dev philosophy here. If it had resulted in break-even or even a tiny net loss of spark, it would make it perfectly clear that the speed was the intended bonus.

So with the enriched compacted etc … you’re getting each level roughly (with some rounding) 18 hours faster.

I pulled those numbers from the GUI, right now boundlesscrafting is giving me some 500 errors on bar lookups. The numbers might shift a bit based on buffs and etcetera (I don’t have spark and wear on this machine right now) but the ration of halving the time to level will be there whatever the time is.

For some folks, halving those times is worth it. But I will say I have only ever spoken to three or four people that were actually excited about it. Late game players who were already growing all of the additional materials, anyways.

and mine with starberry and speed hammers.

this is my desktop wallpaper

It grants a really nice boost, and a boost that can be farmed.

One downside to the way they did the display is that you get:
More Coal and More Spark/heat

So because of that the number looks smaller.

If you have hard coal > Compact it > Enrich it - best outcome for the coal.

Assuming you have a farm for Kindling shards, this is an constant improvement you can make to Hard Coal (for example)

I think it would be better to see the growth you get, if instead of it giving you More Coal AND more Spark, it just gave you more spark.

The numbers would be higher and it would be a more obvious improvement. I think it is a clarity issue, not a balance issue (personally)

In terms of the original question, yes I think it’s worth it, if you have the kindling to spend. Though, for my own kindling I’d jam it into hard coal instead.

The trick here is in the mass crafting, where 36 compact gives out 50 enriched, adding 14 blocks of pure bonus spark:

Something like a 50% increase in total spark ought to be considered worth it, in my opinion

EDIT: Closer to 40%, when accounting for the spark cost for the mass craft, and kindling shred spark value. Still pretty good.

IT dont but hey! Its prety right ?