Foom new sport in the universe

At first it was said it would be work for 2v2.
But in the post where they announced the first tournament they said 1v1

@spoodle and I are in

Yep. Let’s get some practice in

I’d love to join but that’s 12am for me! Hope you all have lots of fun and hopefully someone will film all the action

Well, I am interested, and would also be interested if it’s 2x2. I can probably find someone to be in team with me lol

@PixelatedTwix will be streaming it, I am not sure if the boss (Digby) will be recording this time, probably not.

The arena at this size is perfectly capable of handling 2x2, maybe even a FFA depending on the amount of people, but the boss decided 1x1 for this tourney, but if to many show up way to many it may be turned into a 2x2
Keep in mind that this is our first tournament so we are noobs at this.

I’d choose one or the other ahead of time

2x2 is just is incase to many show up, way to many to the point it would take to long to finish the tourney, that won’t happen yet, who knows in the future if Foom catches on.
Unless the boss says otherwise it’s 1v1

Ooh I just had another dodge bombs idea

What if there were multiple levels? So when you fall the first time you’re below but alive

The ppl who fall would be a losers bracket, and the survivor from “the pit” gets to 1v1 whoever survived above

I actually suggested something similar to Digby, could be possible Foom arena design if done right.

Multiple levels of the ice platform, people start on the top, they don’t want to fall to the next lvl down but eventually they have to as the ice in the first level starts to disappear, this is most of an advanced pro level Foom.

Added signs highlighting the portal with date and time

A guild mate bloodraven has forged 3 low tier aoe shovels to give to 1st place winner plus the 900 shard, and as well to 2nd and 3rd,

I wanna make my own foom arena. so 4x4 plots?

the playing field requires only 16 plots (4x4), with the center 2x2 over unplotted water more than two blocks deep, a few hundred trampoline blocks, and a copper chisel. That’s it. The stadium built around it can be as big or as small as anyone wants, and is entirely up to the builder’s imagination

4x4 Is what seems that Digby put for the measurements. 16 plots in total. 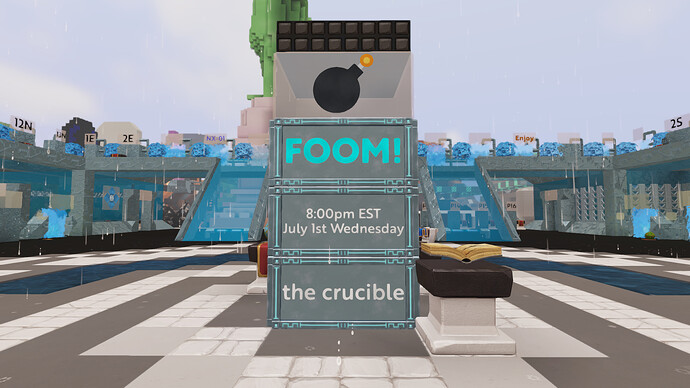 Okay, catching back up - yes, I had it down as hoping for 2v2 but went for 1v1 for the opener, as 2v2 matches end REALLY fast. The arena design was engineered, and trust me I spent HOURS doing the math and tests, to offer the nicest balance for even a new player to be able to compete and have just as good a chance as a 50+ player. So much of Boundless, and even the brilliant sports we’ve come up with like Dodge bomb and the Ninja Challenge, is geared more towards advanced players with advanced skills and gear. When Lance asked me to invent a sport, I went into it thinking that I wanted a sport that negated almost all of that, something even a guy on his first week playing would have a fair chance of winning. Foom is where I ended up. It’s fast, hectic, explosive fun that anyone can play but which, with a ton of practice, a player could actually master and get stupidly good at. 30 different angled surfaces to play bombs off of, it’s got the mad math of snooker or pool. Extra damage hunter specs mean nothing, the ice you did extra damage to is probably the ice you will be standing on in a second. Foom is an everybody sport. No death penalty, and even a level 10-ish player can make a simple arena and some bombs and play with friends. 16 plots, 300 trampoline blocks, a spot over water and a copper chisel, thats all anyone needs for a sandlot Foom arena. And YES, by all means, feel free to expand on the idea by adding your own spin on it. I am fine with people cranking it up to 11. Make bigger arenas, add multiple levels, I encourage the hell out of the idea and I cannot wait to see where you all go with it! I just want Foom to catch on, we all love interactive builds (me more so than most as some of you know), and Boundless sports are the ultimate interactive builds. I have honestly been blown completely away by the reaction we have gotten so far, and I thank you all for the interest in Foom! I knew, the minute we completed the crucible and started playing, that it was fun as hell. I hope to see lots of you tomorrow night for your first time (for most of you), getting to have a go, and this is gonna be fun! Also, I have had a busy week so far, but as soon as I get a chance I will spend a bit of time in photoshop and do a proper blueprint of the Foom arena as a reference work for those of you who want to build your own.

Everytime I see “foom” it makes me think of “floam”