Free portals within beacon, and/or other modes of transportation

I was thinking about the design of super structures, large complexes and disjointed structures, and while those usually are impressive, they can be a bit tedious to explore.

So I started to ponder, how to transport a player around these things? Trampolines and slides are already in the game, but their use is pretty limited. Portals are in the game aswell, but as is it can be a bit expensive to keep up a hub-like amount of portals that are just going to the same beacon. I thought it could be nice if portals upkeep could be free or severely reduced if they were connected within the same beacon.

But then again, it might become a bit trite to have portals everywhere for this purpose. So maybe something else, like

What do you guys think?

A side effect of portals being expensive is that it discourages portal spamming. This is needed because portals are quite resources intensive on the servers. Allowing free portals within any region would simply encourage portal abuse, deliberate or otherwise. 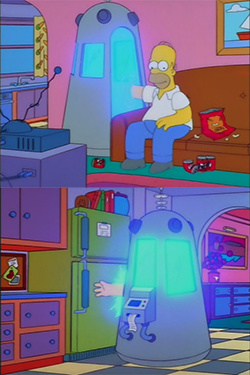 A side effect of portals being expensive is that it discourages portal spamming. This is needed because portals are quite resources intensive on the servers. Allowing free portals within any region would simply encourage portal abuse, deliberate or otherwise.

Yeah, it could have been neat, but when you put it like that it sounds like a terrible idea

Certainly want to be kind to the server, so anyone got any thoughts on the other things I mentioned?

How about a compactor item block like 1 Slide block + 1 Compact Clay block = some kinda tarmac block that increases movement speed by ‘x’ amount?

Ah, now you’re starting to get into the old roads conversation. Generally paving blocks that increase movement speed like that are a bad idea because they tend to become the block to pave cities with, resulting in boring and uninspired builds.

I’d rather see things with a tradeoff that can be activated at will by the player. Running shoes, or mounts for example may let a player move faster at the cost of other shoe choices, or may daze a player that is struck while sprinting in them. A beacon movement speed effect could be powered at the expense of some hourly fuel. There are pleanty of possibilities.

Maybe just permanent warp conduits? Something like mix of portals and warps: they can have destination, but can’t be open constantly, only on demand for a short time.

We can already do this kinda, it’s only annoying to craft all those warp conduits and pay 100c for each warp.

Staying up late makes brain lazy. Anyway, just make em permanent and let them keep destination even when they close…

Like portal doors? I guess you could limit range to like max 10 plots away or something…within the same plot!

Yeah, something in that sense

Also price can be calculated as such: if 100c can get you anywhere on the planet, why not pay only partial price for partial trip. Current world size is about 4k iirc so traveling 40 blocks would cost 1c, 80 blocks 2c… 400 blocks 10 c, etc

I would much rather see a buff potion or wearable that allows you to run faster across the place. While having warps or portals will allow for a faster going from point a to point b, realistically, offering an instant way of getting across will just take away from the city and it’s beauty.

Having faster, yet not instant transportation methods will allow for people to explore the city, yet not take ages to do it. Maybe some implementation of slides or water ways could make it more fun, but that seems of more of a choice for experienced city builders who will be up for the challenge.

Also dedicated cities and guilds. Could easily consider setting up a few portals around. With the importance of it being a few. It would allow for instant transportation across the corners of the city. Without taking a heavy toll on performance and oort shards

I would much rather see a buff potion or wearable that allows you to run faster across the place.

Isn’t that already available with attributes? Or you mean even faster? The issue with running too fast is that will also put stress on server (sending more requests for chunks) and also on players machine.
As for personal preference, it might be interesting to run around a few times, but after some time you might want to get faster to locations.

I meant it as an option, for characters that may not skill the attribute. Yet they may want to move faster.

Haha, yeah, didn’t think of that

It would be neat to have different portals that didn’t necessarily show the other side like the existing portals. These portals could be made to only work within a single beaconed area. The game Creativerse has some simple teleporters that would be cool to have something like them. That way they aren’t such a drain on system resources.

I’d actually rather keep away from using instant teleportation as a general purpose transport system. When people don’t travel past the environment, they don’t care as much about what it looks like, and in turn don’t put as much effort into making it spectacular.

I know it’s minecraft-esque, but some sort of on-rails fast transport. Obviously it doesn’t have to be a minecart or on literal rails, and in fact doesn’t have to be limited to only being stuck to the ground (think Futurama’s Tube Transport System). In theory, that should be better for a chunked map game, because it can know where a person is going to before they get there, and intelligently prioritize loading distant required chunks into memory if they’re not already there. Even more so if you can’t manually exit the transport until you hit your destination.

Alternatively, taking your Jump-pads/directional acceleration blocks idea we could set up ‘Mechanical Oortian Firing Systems’ (a catapult or cannon or something physical). Fire someone into the air to move them long distances quickly. I guess you’d have to hope the person who set it up had the foresight to put down a bed of leaves at the landing point…

As an extension, people wearing different weighted gear (probably not backpack contents) could travel slightly different distances, hilariously causing people in really heavy gear not to make it to the landing point, or people with nothing on to overshoot (something maze-builder could use to great effect).

An alternative extension. Add a portable glider. Then someone can be fired into the air, activate the glider and travel round the city with a bit more control and distance. This concept wouldn’t have to be much faster than walking (so adds less server strain), because you’re inherently increasing travel speed by not having to navigate around buildings. Plus you get awesome views.

Contemplating getting Boundless: Some stuff I'd like to know

Boundless is a physical sandbox, this means that blocks have variable friction and bounciness. New blocks in the pipeline also implement more physical actions (vertical, horizontal, and diagonal impulses, and conveyor belt like behaviour.)