@Redlotus has a great forum post for New Players that want to join, or reminders for folks who have not done a gleambow hunt in a hot minute.

I just wanted to take some time and spotlight what Gleambow hunts are. I have ran into quite a few people in the game that aren’t aware of what they are, what happens and what the results are so I thought I’d give a brief overview of what I have learned about it so far in an effort to get more people interested in the weekly Gleambow hunt the very awesome @Larky put on. What is a Gleambow Hunt? A Gleambow hunt is a special hunt that allows the spawning of special meteors aka “Gleambow” meteors…

Hope to see you there!

That’s a deal breaker for me, but for all others: have fun with the blingy gleamy thingies!

I should be able to make it.

I should be able to make it as well. I’ll be running around with a looter collecting all that easy Oort and Gold!

when you summon a gleambow meteor do you get the mutated sacs as a drop? This is just me being curious, because I’m never going to brave enough to go on that kind of hunt lol.

@Eneitgranny the gleambow sacs don’t drop on player spawned meteors. I have some augments you can have if you do want to collect some gleambow goodies. Also welcome to tag along with me and just pick up the Oort and gold.

This is one of the easiest hunts to attend. Hang out with Shadykatt, run up to the meteor when everything is dead. You get more oort for being close… and it’s more of a run run run … or if Alexx is around, portal with his brood. We’re usually really vocal about when we get to the meteor in GTG chat.

The Gleamsacs only drop during Gleambow Events triggered by Devs or something major. This is a player spawned gleambow hunt. We are using augments.

Good Day Everyone
Is there a player limit?

Yes. This will be held on PTG so max is 40. (planetthatsgood)

Always a party when u show up

I haven’t been on in a while but I have buttloads of gleambow augments in my workshop @Redlotus feel free to ransack if you haven’t already. They’re between the machines and the gold exo spaceship

Yay Foxxy is the bestest!! 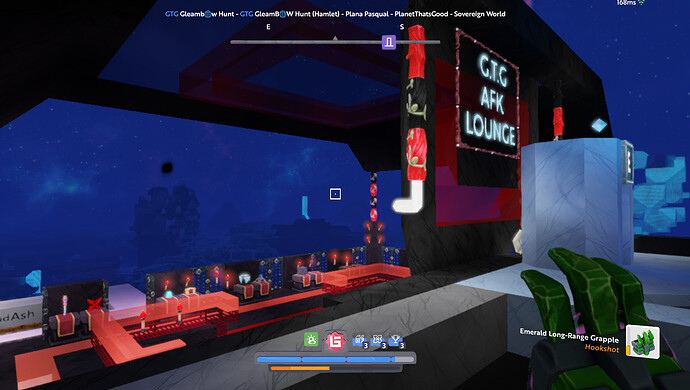 Meh it was no big thing darling

Just wanted to be helpful

How do I get there from the TNT Network? I honestly can’t find it

Go to the GTG network, big portal in the centre of the TNT hub.

and then where from there? there are many many more portals thru that one.

Turn around 180 degrees once you come through via the TNT portal and head to the south side of the GTG hub, toward the section saying Guild Buff info. There is a little 1x2 portal in that room to the right next to the big sign saying CB

Turn around 180 degrees once you come through via the TNT portal and head to the south side of the GTG hub,

Ok, thank you very much.