I hate to say it… but I kind of have to support the owner of the roads. They’re his plots, he’s always been the owner, he can do whatever he pleases with them and he can set whatever “rules” he likes… everything to me seems to be above board.

Although I also agree it is a bit of ****** move to make, he had to be fully aware it wasn’t going to win him any popularity contests and went ahead and did it anyway.

But hey… people can always just vote how they feel about the place with their footfall if they dont like it. Shop elsewhere, sell elsewhere if it bothers you, it’s not as if there isn’t already an abundance of malls in the game.

I agree hes allowed to do what he wants, but he plans to lock the doors to stop people from accessing their plots easily, which is just straightup not allowed, which he dosent believe me when I say so.

I agree with a lot of the points being made. For a new build, this design would be totally awesome. But for a pre-existing one to change means it will effect many people negatively.

Again, these are only opinions, but it seems like more of a ‘Like it or leave’ set up rather than a community based thing (which is perfectly fine, you wanted opinions on this) and if you’re looking for popularity (Not saying that you are) then i don’t think this is the way to go.

Not only have to caused an issue for a very well known and community minded player, but it seems your existing shop owners and land owners are now also at risk.
Again, these are just my opinions and at the end of the day it’s up to you what you do (And the devs in some cases) it is your build after all but it seems this build was meant for the public to use, not a private place.

I’m not big on drama, I hope you find amicable ways of sorting out any issues and good luck with the build.

Last time someone walled plots in a market/town it seemed like the devs were going to remove them. But the person who was walled ended up breaking CoC a little worse and ended up being the one in trouble. Walls blocking people in is never a good decision in my opinion. But do what you want and see what happens afterwards is the only advice I can give. You might gain more people, you might lose some. Will be a risk you have to take if that’s what you’re set on

I agree hes allowed to do what he wants, but he plans to lock the doors to stop people from accessing their plots easily

Is it not allowed? It probably isn’t allowed as it wasn’t stated to shop owners right from the start.

Yes I’m aware of how ridiculous this suggestion is, but boy do I love grand staircases that dominate 3/4 of the interior of anything I build

Some Examples of Griefing:
Building walls around another player’s Beacon

I don’t think it matters if it’s a mall or not, restricting access to someone’s plots I’m sure is again CoC. They would probably look at the circumstances though but I’m sure I’ve seen a case of this before where the shop owner wasn’t restocking but the one who built the walls was ultimately in the wrong

Well there it is, plain and simple I guess.

Is this the one way up on the sky?
If that is the case, and part of this is due to people falling, I can answer the question very very very so very easily as to why that happens. TO MUCH OF THE WALKWAYS/ROADS/EMPTY SHOP PLACES ARE G.D. GLASS! So you don’t realize when its all the sudden open air.

If none of those walkways/roads were glass, or the floors in empty stall spots, I bet barely anyone would have the falling issue.

Anyways, from the screenshot, ehh don’t like the change. Not my build though so you do you. I am neither for nor against the change. Hamburg Mall has walls and specific doors, but it was built that way before it was opened, but it also feels pretty open, not tight and squeezed like the screen shot.

locks will be added to doors after one full month

without putting up rude signs that say closed or something about rule violations.

Honestly the „rude signs“ as you put it would be more legal then trying to deny people access to a build.

If you step back and think about it for a moment, what do you think is going to happen when you lock someones build?

Why yes, It will cause that drama that you claim you want to avoid, so it doesn’t really make sense to have the threat that you are going to lock out someones build if you don’t want to cause drama.

Hey in other news there are a lot of other decent looking malls in the game!

This guy has the right idea.
If the walls bother you, then build downward a bit. Create staircases, or sub floors with portal access.

I can’t say I agree with how this guy is handling things but it is a shame to go from planet to planet and see how many shops sit with little to no stock and truth be told in some cases the shop owner has shops on numerous planets most completely empty and maybe one or two that have any stock .

So does this mean that DK mall has now bouncer service and less shortcuts in future?

I’ve seen this too. Shops that are empty. Messaging the owners doing no good. It’s just sad.

I have spoken with the dev’s. The lock system is indeed considered against TOS. I made a mistake in my planning im sorry. that being said of course it will never be implemented. I wanna thanks those of you that have givin friendly & honest opinions here! I think we should keep this feed open so the results of the lock system voting can be seen even with it being considered against TOS. Some times new things are scary & this was risky i knew that but this was a non public system that was not finished & forced into the public when this could have all been handled privately between the devs & the parties involved. I have spent a lot of time in boundless helping people & building projects that i think help the game as a whole. I did not mean to upset anyone i was simply trying to make something new. i have been managing legendville on a daily basis for over 1.5 years and this was a pretty rough reception to an idea that was never implemented. Currently im not sure what exactly will happen with the future of legendville but i did want to make sure its clear that the new LOCKING system was considered against TOS & it will never be used in any of my projects. Im sorry for any trouble i may have caused you.

All I know is we clearly need a MOVE BUILD or PLOTS option. This way any issues with people can be resolve by people just moving… The sooner this happens the better I think.

Maybe you could use auto door feature, so that shops that aren’t stocked would be on closed state

I LOVE the auto door spanner. And they’re so easy to make…

I take issue with several parts of your post here.

First off you still seem unapologetic about your actions. Not a nice way to play a community game.

Second, you claim this could have been worked out between you and me. I did contact you. You politely told me “tough cookies”. Normally I wouldn’t post a private PM or DM without consent as I think it is rude, but since you have already been sending my DMs around without asking me, I figure you agree. Btw if anyone has the DMs between me and this guy I would be interested to see if he selectively edited. I can’t really see a way that he could have done so but it is good to be sure things are above board. 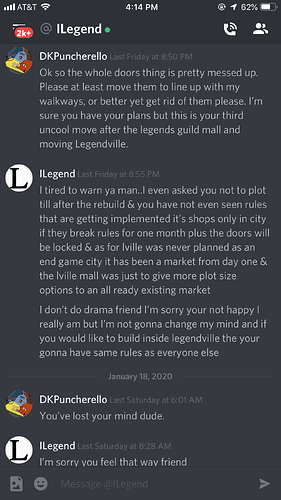 Third, you just basically moved from Tana to Delta with not a word from me during your 5 months building. It would have been polite to give me a heads up. We were friends for a full year and I own half of Legendville. I was honestly ready to not be your friend anymore after that, but after we talked last month you promised me there would be no more unpleasant surprises. I definitely consider walling me off an unpleasant surprise. 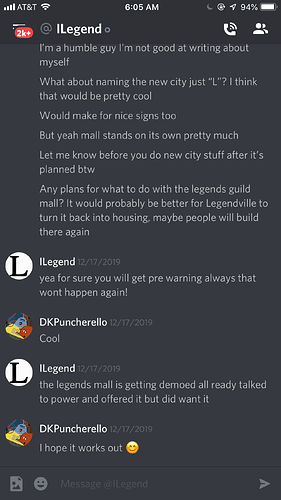 Fourth, you seem to have decided to pretend that the community response is solely to your locked doors idea. It is not. All those people who reported your build? They were reporting your current build not the one in your mind.

To the community: I’m sorry all of you got involved in this ugliness. I hope we get a resolution from the devs that this sort of behavior is not OK, otherwise people need to think before moving to a city “is this a stable city with a stable person in charge? Or might the roads get turned into walls some day”. In my opinion people shouldn’t have to be worried about that. Sure the city leader could quit and you might have to build new roads. But turning roads into walls a year into a city’s life, and refusing to make any sort of attempt to compromise is… yeah. I think that it is just as much a TOS violation as anything else done here.

Pretty much the only people in Legendville are mall residents, me, prime (Fantasy Tree) and lovelyladyroo. You walled all of these people off. Prime is leaving Legendville. I would leave if I could, but I have a responsibility to those who depend on me so the mall is stuck next to you, my bad luck. I’m sure roo will move too as soon as she sees what you have done.

Not a nice way to treat your citizens. I’m sure the community will take note.

I hope above all that you are okay.

ya Dk so don’t be too mad with me…(I already stated that I think Legend’s actions weren’t very community friendly imo…I like to look at things logically, from all angles…)

I don’t think the community should get into a habit of judging builds. Bringing a problem to light is good though. People were unsure if the walls/doors/locks were breaking CoC. Now we know for certain.