People, be patient on Exotic Earthyam seeds. 5 days, 50c each

Right so I managed to get around a hundred by being l33t gam3r boy, and I’ve planted them in a seed farm. In 5 days (est) the seed farm will be filled and all excess seeds will be sold…

I estimate to generate 7-11 excess exotic earthyam seeds per day, which will be placed in my farmers market section of my farm for 50c each.

This farmer’s market is located near Atlas World OG in Anvil on Seganikai(or however it’s spelled).

Currently there’s a nice selection of the various easier-to-find plants for 10-25c. Including combustion particles for 25c. 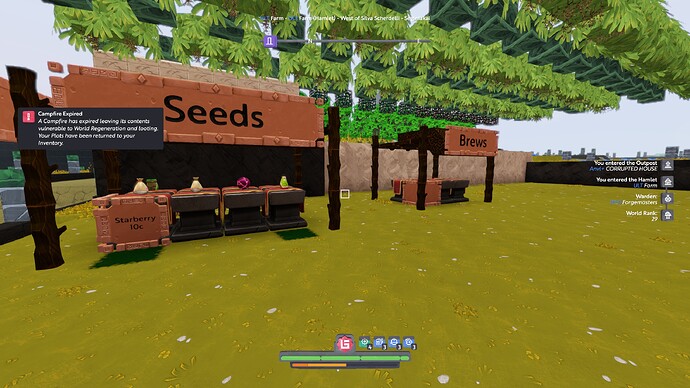 Right there. In a week that will have exotic earthyam seeds for 50c.

Lovely idea, but how do you feel about people buying them just to resell for massive profit?

Am sure that has already happened somewhere…

I don’t think anyone that runs a shop should really be worried about someone reselling your seeds or items to another shop for more money. The fact is the seeds are pretty overpriced at the moment by most people. 50c for a seed isn’t a bad price.

I just wish I had better directions to the location to check it out.

Sure - the instructions in the top post and comments in the following pages should help you get there.

TO ALL! Anvil Revitalization Project has sites available General

Hi! So, because most of Anvil (on Seginiakai - US West Tier 2 Lush World) has left or taken extended absences I’ve decided to launch a revitalization project to bring more active players to the city. Specifically the areas around my house that aren’t already occupied - to the East-Northeast of the Anvil Grand Promenade (city center park and Aridhol’s workshop). I’m looking for people who want to live/work in Anvil and chat. So storage houses, workshops, and farms are all fine. As are grand art …

Atlas World - In Ultima Hub! (near clocktower on West side) General

All but one Atlas available - still mapping Imdaari - curse Imdaari, worthless level 3 lava world! Currently with all 3 exoworlds! Will map more as they become available. Located in Ultima’s Central Hub on Eresho - 3 blocks west of the portals, next to the clocktower. Big glowing white atlas on top with shields powered by the souls of shoplifters. NEW LOW PRICES! Tier 1 & 2 worlds for 300c, Tier 4 for 400c, Tier 5 for 500c, Tier 6 for 600c. This is less than HALF of what the old shop charged! …

Thanks was able to find it.

You’re right, it’s not a bad price, but some shopowners have low prices like this to help the community, rather than to help the 1% get richer.

If you’re selling something a lot cheaper than everyone else, but somebody else just buys it and sells for that higher price, who are you really helping? It took longer than necessary for the price of coils to drop to the level they should have due to this type of situation.

I will do the same at VB Rocket Shop (from PS hub Boori). Will put the extra Exotic bulbs from each days harvest up for sale for 50c so we start getting more people building their own farms for them. I only had 2 extra in inventory for now, so just put those up, but should have more later today.

I have 20 more i will give free to anyone who wants in sets of 5 each (so 4 different people get 5 each) I am just doing some organizing around my area so shout if you cant find me.

Great to see other people doing this @Doogiekr.

And not trying to steal yours or anyone elses thunder but this seems the best place to let people know that I too have approximately 100 exotic yam seeds to give away to people who have missed out on gathering any so far, I collected a few hundred when the T4 popped up yesterday for this exact reason and have managed to find a half a dozen people truly in need so far to give some to. So if anyone else would like a handful of these seeds to get their farm started then please let me know.

I will follow @xira1979’s lead and put any of my excess produced seeds up for sale @ 50c each on a shop stand next to my wee farm. Good show sir, I have been a little bit sickened to see the prices these stupid things have been selling for and people have also been willing to pay and I will be pleased to see it end.

I got a small batch several days ago on an Exo but through repeat farming its grown to a comfortable amount for me to give the excess away as I get it. I will expand my farm later once more people have had a chance to at least get started on their own farms of Exotic yams.

Edit - my connection is completely unplayable. Will try again later and hope for the best.

Restocked with today’s surplus seed production. Will take a while to restock those Mega Starberry brews though

About 50 new seeds, between the various types (sorry no exotic earthyams just yet - my 5 day prediction seems to be playing out accuratly). All between 5-25c.

Thanks for buying everything out whoever!

If I am selling something cheaper than other people and I can sustain that price, I won’t really care if it’s actually helping someone. At some point that person who keeps buying out the stock will stop because they don’t need it anymore. So long as I am able to produce the seeds at a quantity large enough to satisfy people coming back every one to three days, I won’t really care.

As far as it helping people out, yes, it does. Whether that’s a rich player with coin to burn or someone who plays all day and has very little coin, it will help someone. The wealth the player has makes zero difference in that.

Well that was fast. Just some combustion fraction kernals left. Will post again tomorrow when I put up a new batch

What are the coordinates to your farm stands, I would love to see your farm so I can build my own for seeds also.

What are the coordinates to your farm stands, I would love to see your farm so I can build my own for seeds also.

There’s not all that much to see just from looking - I can explain any bits you want to know about if you contact me in-game. Or here if you ask.
Coords to the farm/farm stands are (1078, 2028, 70) on Senginikai. I’ll be in the general area for a couple of hours from now if you want to /shout a question I’ll come over and help.

I only don’t understand how to setup the farm for seed versus crop. The yield info throws me off, for example oat grain for seed needs compact peat and water, but for crop it needs filled peat, near mud, and water. How far is near can someone show a basic layout.

A basic layout that’s both slightly seed-positive and yeilds between 40-180% crop is my farm. Which is also somewhat unoptimal because that makes it much easier to actually physically farm the crops - I just go down a row and mow everything down and replant.

Someone posted a guide that shows the general area that affects a crop, optimized for seed yeild - Maximum Starberry Nerd Information but again if you want actual crops you’d want a setup more like mine.

The starberry part of the farm is aboveground and fairly easy to understand just from looking at the layouts, thorns in this pattern, specfic foliate type in that pattern, mold here and there, growth for the glossies ( I think it’s the glossies anyway

If you have a question about what’s under the cover blocks on the ground crops you can ask - but basically they are a single like of half-blocks of the seed producing block, with water or lava filling the other half of the block (except for the goo - lava destroys growth, so they are on seperate sides. Also the goo isn’t seed-positive because it can’t be done, hence no promises to sell goo seeds). The Kranuts are alternating blocks of amber and compact iron topped with water - with the alternation reversed every row, for a slightly better yeild.