Hey there!
We’re getting ready to open the Raxxian Emporium to merchants!

What is the Raxxian Emporium?

The Raxxian Emporium is our take on the Mall idea.
Basically, we have a marketplace in need of merchants!

Where is the Raxxian Emporium

It’s right next to our Portal Hub, which is connected to (among other places) :
• Blood City Horizon , the capital of Raxxa
• Raxxa’s Portal Seeker Hub
• Kindred Bay on Sorissi
• Sasquatchville on Alder

We’re looking for merchants. We handle the plots and beacon fuel for you, you get 100% of the footfall tied to your house/shop, but you build your shop under our guidance.

• There are 35 spots in the marketplace. 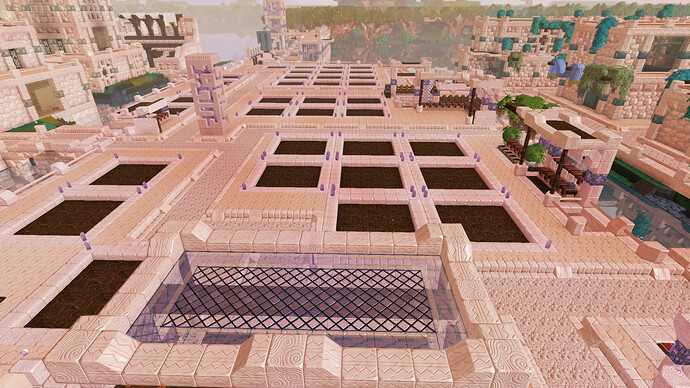 image.jpg1920×1080 1.23 MB
• Each spot is plot-sized, meaning 8x8 blocks, and they extend vertically up to 5 plots (to account for the trees we had to remove), but can be extended further is needed, and with one exception, each spot is by default valued at 3719 prestige.
• Each spot can be a shop owned by a merchant.
• Under specific conditions, one merchant can own several adjacent spots to make a bigger shop.
• Each spot has 2 plots below the ground to establish storage spaces or to expand a shop. 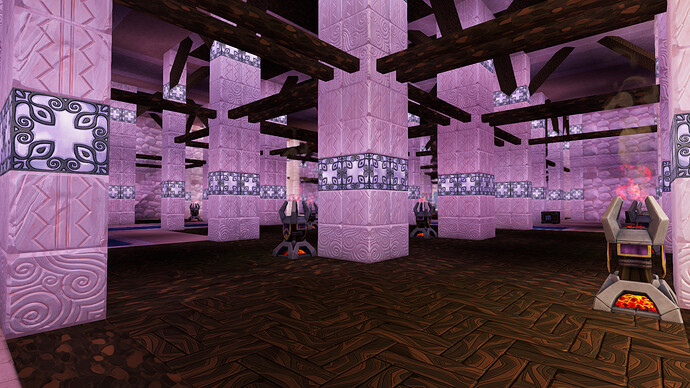 • The use of factions was advised by The-Moebius, so now, each shop spot and each house is linked to its own guild faction. It looks a bit crude, but apparently, it works.

• Each faction control is located in the big Ziggurat building, in the “Raxxian Records Office” : 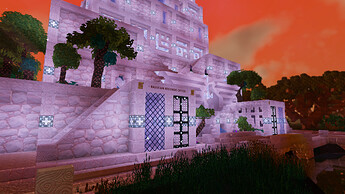 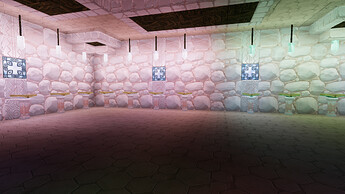 • Expect us to only accept merchants who are known on the forums and in-game as nice people, to avoid any future problems. We wouldn’t want to accept someone who’s secretely a troll wanting to build some dark glass monstrosity in a spot or to leave a hole for people to fall into. Either way, we will take actions against these people.
• A shop could be purposefully small and contain just a portal to a bigger store elsewhere.
• Merchants will be required to align themselves with a Guild Faction Control named after the shop spot they want.
• A shop’s footfall and the money made through sales will fully belong to the shop-owner. Seems obvious, but I’d rather make this clear.
• Additional adjacent spots would be granted depending on the shop project (in a case-by-case scenario).
• Merchants will be asked to design their shops while keeping in mind the style of the Raxxian Sanctuary.
• To this end, members of the “Raxxian Marchants” faction will be given access to a discount “Raxxian Brickwork” store where they’ll be able to buy or sell the blocks generally used to make the city.

About the Raxxian Sanctuary style :

• The architectural style of the city is quite versatile, as shown with the several shop-stands we made in the Emporium. 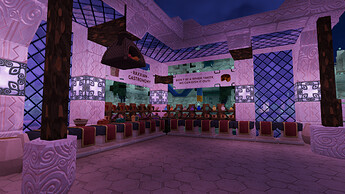 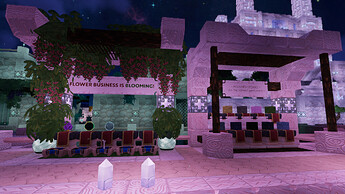 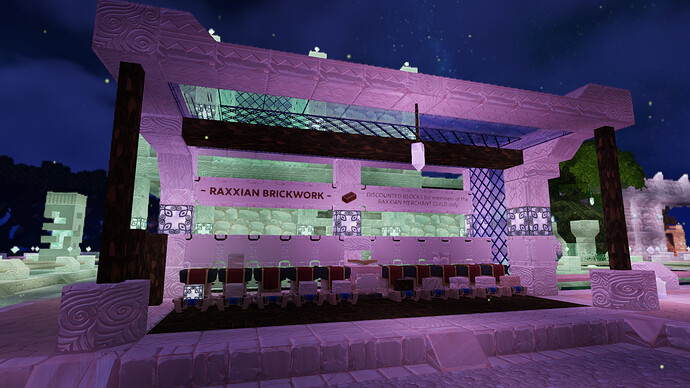 image.jpg1920×1080 794 KB
• If you want, you can build your shop high, low, it can go in the bowels of the Emporium, it can have lava (if 100% safe for visitors), or be made entirely of ornated glass… there’s still a lot of freedom to have.
• What we would rather avoid in the Raxxian Emporium would be giant gleam-pixelarts, over-use of emojis, or store colored in pink, vivid green, etc.
• The whole point of the Raxxian Emporium is to have a mall with a unified architectural style.
• To this end, Malentir and I will be available to help our merchants in any capacity we can muster.
• I have setup a Discord where I’ll send people so we can all work together. There, I will post pictures of our typical designs and patterns to help-out our merchants with their shops.

• If interested, merchants will be offered access to a house of their chosing (within availability - currently, there are 17 houses - we will add more if demand warrants it and/or if we feel like it). 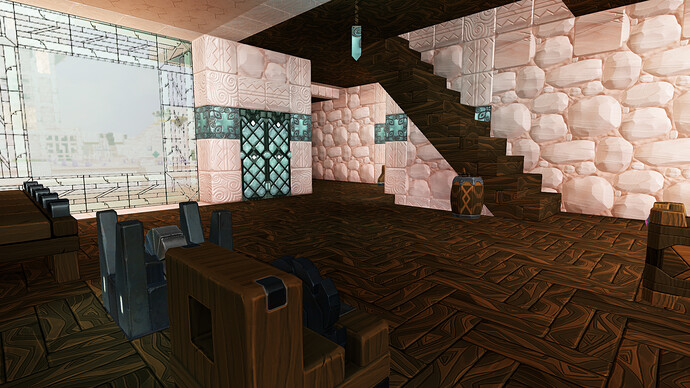 • Each house has a basement connected to a network of sewer-lines, because why not?
– More recent houses don’t yet have the sewer-lines done, but it’s coming.
• Each house owner will have access to a Factory zone which will eventually have every machines at full power. 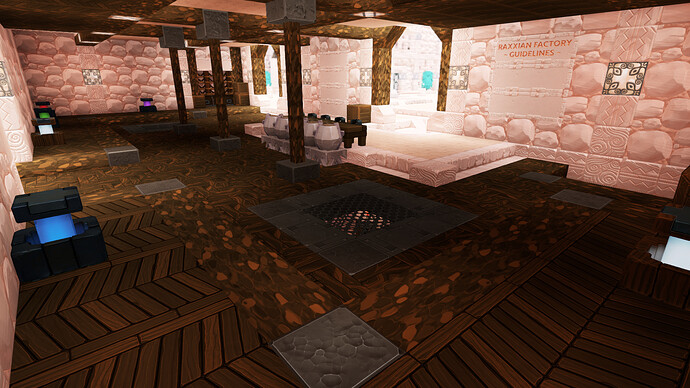 image.jpg1920×1080 938 KB
• Following an idea given by @the-moebius, each house is linked to a Guild and a Faction (such as First for the Cold Berry houses, Garden for the Cold Viridian houses, Nature for the Stale Turquoise houses…).

• Each home owner will be required to be a member of the Guild Faction linked to the house of his chosing. This is to avoid reclaim mishaps, and to allow me to keep overall control of the houses, while not touching to footfall and still dealing with the beacon fuel (which is currently taken care of for the next 12 months).
• If a home owner stops playing for an extended period (such as 3 months) without giving any reason (being on deployment for the army would be an understandable reason, for instance), his belongings will be placed in cold storage (if needed, any changes to the house would be reverted) and the house would be given to another player.
• House owners would be expected at the very least to not alter the style of houses.
• If a House owner desires to make modification, I would have to be notified. If it’s underground space, that shouldn’t be a problem. If it’s to add a tower touching the sky-limit, that would be more of an issue.
• House owners would be expected to not take anything from the houses (such as machines or storage) to another location.
• House owners are expected to not Reclaim their house, as we’ve put some significant work into their designs.
• Users of the Raxxian Factory will be required to (obviously) not steal what others have crafted, or to not try to remove machines or anything that doesn’t belong to them.

Right next to the Raxxian Emporium, we have a Portal Hub. 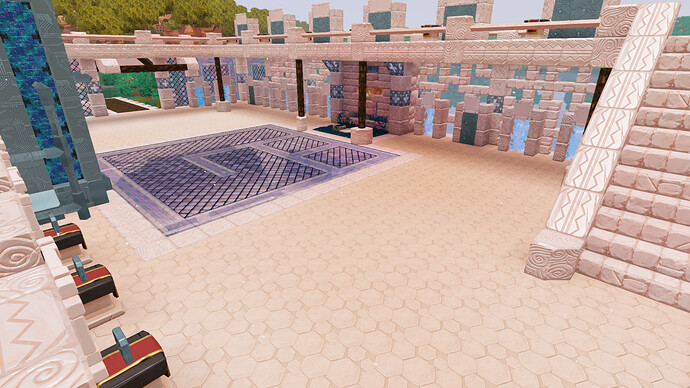 image.jpg1920×1080 1000 KB
• It should be able to provide people with ways to connect to their personal home/workshop/store, wether they are on Raxxa or off-world. Bigger portals can be added if needed.
• We currently deal with the portals leading to the Raxxa Portal Seeker Hub, Raxxa’s Capital, Blood Horizon, as well as a variety of other places (like @Lesioui’s Sasquatchville).

We are discussing internally if, after a while, some of our shop-owners or house-owners could be offered to join our main guild, meaning access to our comfy bank and workshop, and maybe even be offered to build with us. 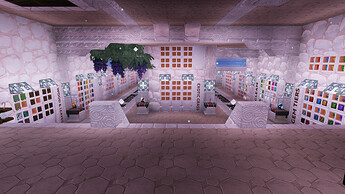 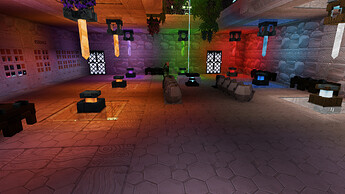 image.jpg1920×1080 801 KB
This would require some deep consideration of the risks involved, and it would be based on how much we trust a player, how cool his shop is, how much people like it, how nice he/she is, etc…

I think I covered everything. If you have any questions, let me know, and if needed, I’ll update this post.
If you want to apply and become a merchant at the Raxxian Emporium, let me know in a message below or in a private message.

The risk of losing a house :

Whereas a shop-owner deciding to stop playing the game and leaving his shop to die-out slowly (even more slowly with a long-enough Gleam-Club timer) would be quite bothering, if it was to be reclaimed, it would not be a colossal loss.
However, losing a house would be far more problematic, because of the time spent making each one of them. If you are to assume the beacon-fueling of a house at the Raxxian Town, we are putting our work in your hands! It is important for you to understand that.

this can keep your town problem proof forever

simple explanation:
you make housing guilds each faction is a house
people join the book as only member off the faction
and get full acces if anything goes wrong you can empty the house store there stuff
somewhere and open it up for the next user

Yeah but reclaim still = loss of all the chisel-work, etc. That’s what bothers me the most.
The blocks, it’s a problem too, but we have lots of spare blocks in our bank.

Aaaah. That’s interesting.
I’ll admit, I haven’t explored much of the possibilities behind the guild factions.

ill pm ya with details

I’m very interested in a market space and even a home to rent. It is a wonderfully beautiful city that I would love to be a part of

He he. Malentir and I have seen you quite a bit in-game lately, so you’re in.

You can decide which market-spot number you want to claim (same thing with the house, decide which one you want), and you can already apply to the Guild Faction book tied to that market-spot/house in the Raxxian Records Office where we were earlier. I’ll give you the access tomorrow too.
One side of the building is for Houses, the other side for Market spots.

Took me a while, but I think it should all work properly, now.

Made 50+ guild factions (meaning roughly 9 ‘fake guilds’), and each faction is tied to a guild.

Finally figured out that my idea of the Raxxian Brickwork wasn’t working. I thought the advanced locks on the selling plinths meant only the faction members could buy from the plinths.

I guess to make it work, I’d have to disable the discoverability of the plinths and hide them in a locked room that only faction members could open, but even that wouldn’t be full-proof (someone could sneak in while the doors are temporarily opened by a player with access.

So until I figure out a better way, it will just be a storage that looks like a shop, made for faction-members to take what they need from what we give them for free. I just hope they will have the decency to not empty the plinths. ^^

D: were Can me stick a Warp Conduit Shop lol

@BabyCookie Well, I can jump in-game and show you.
EDIT : I am on right now. If you reach the Portal Hub at the Raxxian Sanctuary, I can answer all your questions.

So, I don’t know… I’ve waited for roughly 1h30. I’m gonna go do something else I think.