Update will be live once the downtime is complete:

Hey Everyone. We will promote Testing 236 to Live 237 on the 11th December at 10 UTC. Full release notes to follow.

This release focuses on getting good stability over the Christmas and New Year period. We don’t want to release anything that could potentially contains issues as it’s not possible to make any new releases on PS4 during this period.

We’ve fixed a range of issues around the presentation of beacon fuel and Gleam Club duration.

Finally the update includes an expansion to Oortmas for 2019.

Only allow closed-storage blocks to be broken by users when the contents are empty.

This helps accidentally breaking a storage full of items, as well as guarding against performance implications on the server of having hundreds of large stacks of block-drops all in the same location easily achieved by AOE breaking full ornate closed storages with hundreds of stacks of items.

Possibly the best thing, thanks for addressing this issue and coming up with a solution

Was never able to attend Oortmas last year so pretty interested to see what will happen, i finally get to buy my beard lol

Got some presents building up for people

I’ve tried to be a good lil Oortling!

Well, sort of… best I can… oh, go ahead and drop my well-earned lump of soft coal on me…

Changing the way clients receive the expireTime of beacons so that network packets cannot be analysed/injected and memory cannot be read (aka “hacking”) to determine the expiration date of any beacon that you do not have permissions for.

Good to see this hit. It is time we stop those that continue to use memory reading/injection to cheat and take advantages of game systems for their benefit over other players. It really is unfortunately that various people in this game choose to cheat.

If people know of other cheating or things that people do to take advantage of game mechanics especially via memory reading and other hacking techniques, please PM James directly with information (he will keep it private) and hopefully the devs can put fixes in.

Boundless will be a much better game for us all when it is fair and an even playing field for every person.

It’s worth adding that there has been no evidence that anyone was snooping beacon times and abusing it.

I do understand you hadn’t directly seen it but I don’t think anyone was doing a sting or replayed beacon expiration and how fast new plots showed to prove it didn’t. Additionally, it came out that it could be done which means people were clearly looking for that ability. So the incentive to cheat or take advantage of memory reading in all ways possible was likely based on behaviors of some.

There were many situations where it was very questionable how some people were always at beacons upon expiration as well as plenty of discussion in select groups about people doing it as well as expansion of the memory hacking toolset that was available. I wouldn’t have pushed it had I not heard it from trusted people. Of course that stuff would be kept quiet and only discussed among certain people because people didn’t want it to come out.

Whether it was done or not it is for the betterment of the game to stop this where we can. People can use it to create X-ray type tools to find all resources as well as map out where the resources sit. Advantages like this only make things worse in the perception of the game and how new/casual players might react. It isn’t good for the game on any level to have a lax agenda around cheating on any level. It should be a strong clear signal from the development team that any direction in this area is not tolerated on any level. Even if it was just “perceived to happen.”

Then we have very different definitions of evidence.

it’s not possible to make any new releases on PS4 during this period.

Is there a date for when this period ends? I infer this is a Sony thing, why the lockout?

Keep up the good work!

I dont know if its the right place to mention, but my emerald grapple’ projectile is purple (amethyst?) while shooting. I havent noticed it before so maybe it came with the new update. 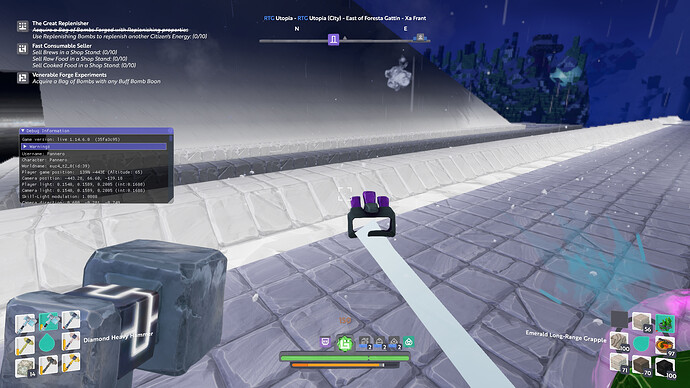 Make a separate post under the “support” category, I think the dev who deals with bugs sorts through posts via the support tag

Edit: I did it for you, I’m getting the same thing happen to me

The same problem as stated here, but this was posted in the Release 237: Oortmas! post. Happens to me also. @Pannero

@james will we get some new things in the exchange for xmas?

new paints or something?

Some sneak peeks in the event thread