Last summer, I participated and won three competitions. The first one was TDragon’s competition that was on his planet. The prizes that were advertised included a wayfarer’s game key, but was not delivered. To compensate, I was offered a normal game key however when I went to activate this key, it was invalid. The second competition I participated in, Janus II statue contest, included 6 months of gleam club that I have never received. Granted the other prizes that included in game currency and prizes and such were given to me. However, for this to happen to me three times is really disappointing and frustrating. If one is going to offer prizes for a competition, make sure that you can actually deliver said prizes. If possible, I still want those prizes. I spent a good 8 months of my time working on those competitions, I feel that I should get what I was promised. I have recently sent private inquiries to people about this and haven’t heard a peep. It’d be nice if I could AT THE VERY LEAST get an excuse for why I didn’t receive the advertised prizes.
Nalidragon

I don’t remember T-dragons competition offering wayfares key Daddy Georgio & I woulda entered if that was in the prizes but I do remember it offering regular keys, was there a back order prize only to you boop.
me

@Nalidragon on behalf of TNT, I’m sure there’s a logical explanation why this didn’t go as planned. In any case I will connect with you privately.

Very correct. I would have entered for that… and won. Count your blessings that an oortian key wasn’t offered. You don’t want to know what I would have done for that.

Oortian key was different than wayfarer.

Yeah it was the best/most expensive key. +200% plot bonus

Hmmm, TDragon was the person who told me it was a Wayfarer game key. Since I was new to the game, I thought that’s what the game key offer was. Georgegroeg, bring it on!! LOL

Look, my point isn’t who would have won had it been a wayfarer game key, or even what the prizes were. I would have been happy to win in game prizes, had that been the only thing promised. My point is that I participated, spent a lot of time building and creating. It was my first ever build and I taught myself to chisel since I’d only been playing the game for two months when I entered TDragon’s competition. I didn’t post anything back then about the mix up with the prizes because I thought things were squared away. Also, thank you kasisaru for contacting me so quickly.

Was it this contest?

[competition-banner] Update We have had many requests to lower the plot size so we have to 4x4 on the ground or larger and as tall or low as you like. Hey there community members! Twisted Dragon competition starts TODAY 2020-11-27T05:00:00Z (UTC) and judging will happen on 2021-03-27T16:00:00Z (UTC)! We encourage all builders experienced and new a like to join us for the FIRST ANNUAL Twisted Dragon Valley Draconum (Valley Of Dragons) Competition! As stated in our previous post we have opene…

Yes, I believe it was. The game key I was given was invalid.

Wasn’t it you and your brother that won the TNT building contest. I remember because I’m the one who judged it and gave you the win. You’re welcome.
But just want to make sure your brother didn’t get the prize already. As it’s been about 6 months since that contest. Anywho. If someone does host a contest they definitely should give out the prizes. I’m not sure that Dragon person still plays Boundless as they started creating there own voxel game. So I doubt you’ll see anything come of that but who knows.

Btw you don’t want any of this.

Yeah, whatever you say. Please don’t worry, someone from TNT is already in contact with me.

You’re probably right about the game key though, since the person who hosted the game isn’t playing anymore. I’m just relieved the friends I offered the game key to, didn’t want it. That would have been even more frustrating and embarrassing. Like, “Here’s a free game key I won in a competition!! Come play with me. Whoops, sorry man it’s invalid.”

@Nalidragon I was forwarded this post and felt that I needed to login and respond because I wanted to clear the air.

The Founders Key: That was offered by another player in the guild who left before the competition was over. I explained this and we agreed on my just giving you steam cash in place of it.

I offered to meet in middle and I sent you $55 in steam cash and an digital deluxe upgrade key. Of which I sent it, I asked for a little time because I was strapped for cash but I still made good on my word and what we agreed to.

I am still on discord and in your discord if this is how you felt about it you could have come to me directly and we could have talked this out further. But you said back then you were fine with the solution. I never meant to make you feel like you didn’t get what you were promised. 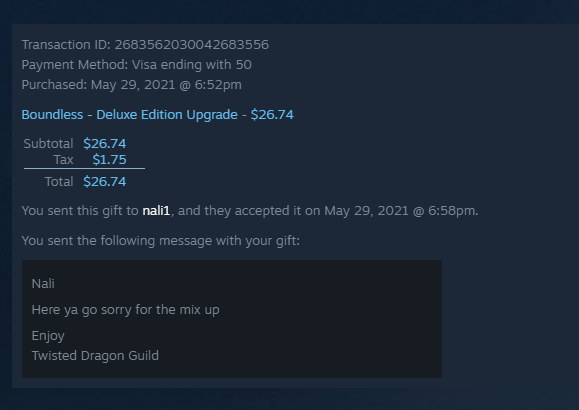 Dragon the game key you gave me was invalid. The prize was a game key AND one year of gleam club. You gave me the gleam club and a game key that is invalid. After everything I went through, I decided to go onto the forums since I wasn’t in contact with you anymore. You did follow through with everything else over a time span of two months getting things settled, but this whole process has made me feel like I was duped. Please note that my problem with this is the fact that my game key is invalid not the issue with you giving me the other prizes. I shouldn’t be made to feel bad for insisting I get what I was told. It’s not just this competition. The other competition didn’t give me the 6months gleam club which is to my knowledge being worked out privately in discord. It seems people keep bringing up issues about my post other than what’s the problem.

I was not trying to make you feel bad. I just don’t understand that if you felt this way back then why you were not honest and it had to resurface 6 months later. I don’t like being accused of dishonesty of any sort, as I was raised that person is their word and their word is all they have at the end of the day. Everyone that knows me in this community knows all you had to do was be HONEST about how you felt and I would have gone the extra mile to make you happy.

I just sent you a key that IS valid and I hope this fulfills our agreement and you are happy.

Dragon, Things were solved and I was ok back then. I don’t know how else I can say this, but I didn’t have issues with how things were settled back then. It’s only recently that I learn the game key was invalid and everything else stated. I only mentioned that I was disappointed with how things turned out. I don’t think I was dishonest with you, if anything I was direct and patient. I appreciate your quick response and resolving the issue. Thanks, Nalidragon.

Nali, I am glad that you are pleased now, I didn’t mean that you were dishonest as in you lied. I just meant that it ended up what you said you were ok with you were not. in the end. I am not upset or feel any sort of way, I am just glad you are happy and this is resolved.
If anyone else has an issue with anything else please feel free to contact me via discord, I really have been gone since my last post and I only came on to resolve this matter. I am leaving again permanently .
I wish everyone the best! keep on building!
DragonTamer
Twisted Dragon Guild

I can’t remember what day it is, what I had for dinner last night or where I left my car keys… No way in hell I’d remember a key from 6 months ago.

But maybe everyone I have talked to owes me a key … I’ll hold my breath.